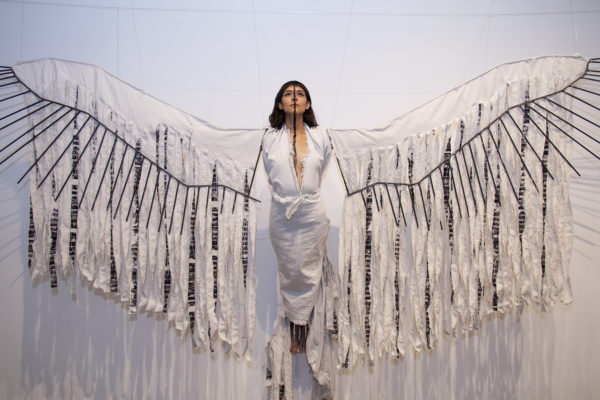 Perhaps it was a bad omen when, on the evening of April 13, 2007, Linda Ronstadt’s outdoor performance at the opening of San Antonio’s new Museo Alameda was cut short due to impending storms. The institution got off to an impressive start with exhibitions such as Escultura Social: A New Generation of Art from Mexico City (2008), Phantom Sightings: Art After the Chicano Movement (2009), and a two-person exhibition of the art of Vincent Valdez and Alex Rubio (2007). The museum was the first Smithsonian affiliate outside of Washington D.C. and, at the time, the largest museum for Latino art in the U.S. And yet it shut its doors after operating for only five years. In 2012, the Museo found itself deep in debt to the point of bankruptcy. The size of its staff had diminished from thirty to four, and the exhibition schedule had gone from eight or nine exhibitions per year to just one.

In an attempt to revive the floundering institution, the San Antonio City Council turned the lease over for three years to Texas A&M University-San Antonio (TAMUSA), which immediately renamed the facility the TAMUSA Educational and Cultural Art Center. According to TAMUSA’s website, they intended to continue the museum’s mission “to tell the story of the Latino experience in America with a focus on South Texas through local and regional art, history and culture, dedicated and sharing the transnational experience of Latinos in America.” Unfortunately, TAMUSA failed to live up to this promise. In its first three years of operation under TAMUSA, the name of the institution changed twice, first to Casa Rosa and then to the current Centro de Artes. Only two exhibitions were presented, and attendance was near non-existent. In 2015, the nominal staff was axed, a new university president had just been hired, and seasoned arts administrator Joseph Bravo (former director of the International Museum of Art & Science in McAllen) was brought on board. 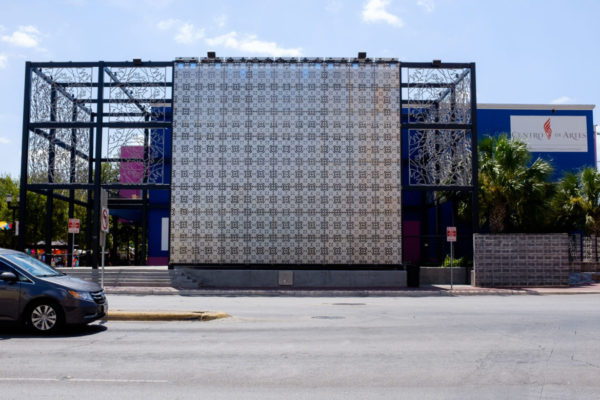 Bravo submitted an ambitious exhibition schedule that included five exhibitions by Latino artists. The schedule was approved for funding by the city’s Department of Arts & Culture (DAC), but not by university officials. Although Bravo launched his programmatic vision in March of this year with an exhibition by veteran San Antonio artist Roberto Gonzalez, all further programming was blocked by university officials who, it was soon learned, were in discussion with the Daughters of the Republic of Texas (DRT) about housing its archives at the Centro de Artes.

When the district’s City Councilman Robert C. Treviño learned of this plan, the outrageous slap-in-the-face to the Latinx community was not lost on him. Due to the councilman’s intervention, TAMUSA will set up the DRT library in the former Federal Reserve Building, and the university has given up the Centro de Artes, which is now in the hands of San Antonio’s DAC. Although-long term plans have yet to be defined, the inaugural exhibition under the new leadership is indeed a return to the institution’s mission. Originally scheduled for the Plaza de Armas Gallery and expanded for the larger Centro de Artes space, the exhibition was organized by DAC Public Art Specialist Sean FitzGibbons and Special Program Manager Sebastian Guajardo, who selected the artists following six months of studio visits. Titled SATX/MX: Un Viaje Lleno de Cultura (A Journey Rich with Culture), the show features works by 21 San Antonio-based Mexican and Mexican-American artists who examine what it is to be in the grey area between two cultures, San Antonian and Mexican. While some of the artists are first generation Americans, others immigrated to San Antonio from Mexico. 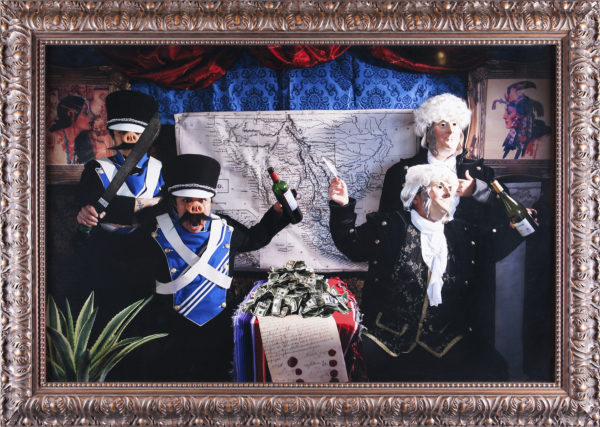 To contextualize the art works, FitzGibbons divided the exhibition into six thematic subdivisions, with the most impactful being “Symbolism and Fictitious Narrative” and “Journey of the Immigrant.” In the former section, viewers encounter a range of subjects drawn from both historical sources and contemporary experience by established artists Albert Alvarez and Ricky Armendariz, and relative newcomers Mari Hernandez and Ernesto Ibañez. 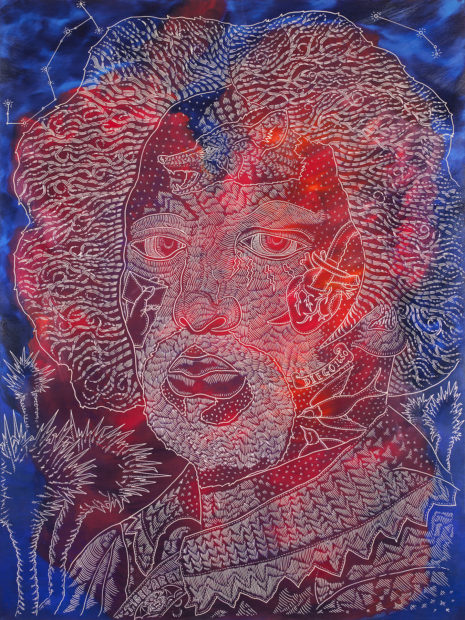 Hernandez and Armendariz have each based some of their imagery on historical events that are important in Latinx history. In Hernandez’s satirical staged photograph The Signing (2016), the artist appears in several roles as pig-snouted Mexican soldiers and Americans with disheveled wigs who booze it up as they celebrate with American dollars piled on top of the 1848 Treaty of Guadalupe Hidalgo, which gave half of Mexico’s land to the U.S. Armendariz’s portrait, Juan de Pareja (2016), establishes a connection with an even earlier time and place; the image is based on a 17th-century painting by the Spanish artist Diego Velasquez of his assistant, who was a mixed-race slave. Close inspection of both of these works reveals subtle iconographic tactics through which the artists claim these historical moments as part of their contemporary identities. The currency in Hernandez’s photo is clearly from the present day, and Armendariz has tattooed the face of Juan de Para, and included a Spanish Yucca Dagger plant that’s common to the American Southwest. 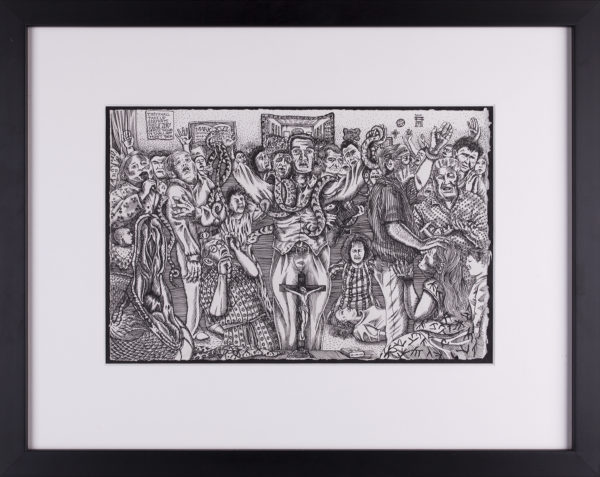 Albert Alvarez’s delicately rendered and intricately detailed drawings, as always, reveal his keen powers of observation, as he presents narratives inspired by the seedier occurrences that he’s witnessed while riding buses around San Antonio. In A Serpent Shall Lead Them (2014), his characteristic outcasts participate in some ritualistic act of blind faith. And in contrast to Alvarez’s typically dark worldview, Ibanez’s vision is one of optimism. Using a simple emblematic symbol, Ibañez compares his relocation from Mexico to San Antonio to an adventure in outer space. In his painting Plastic Bottle (2016), a used empty bottle is a metaphor for everything he left behind, but it floats like a free spirit. The opulence of Ibañez’s palette suggests a hopeful view of a better life in America. 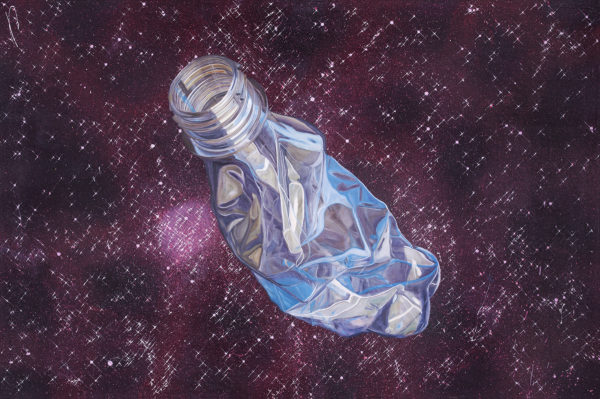 Themes of flight and freedom are also prominent in the section devoted to immigration.  Among the more compelling works in this area are Juan de Dios Mora’s linocuts, which are executed with the same meticulous precision as Alvarez’s drawings, and a new performance sculpture by Daniela Riojas. 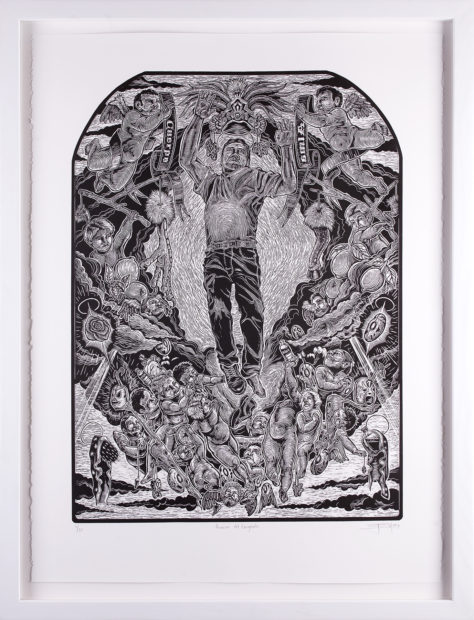 Mora, who emigrated from Mexico to the U.S. in 1998, creates satirical narratives about the plight of border residents who are always on the run. In Asunción del Emigrante (Ascension of the Immigrant), he blends elements of Old Master religious art with pop culture references to tell the story of a man who never made it across the border, and is shown instead ascending heavenward. Assisted by a corps of putti carrying contemporary plastic water bottles (the familiar emblem of contemporary border life also employed by Ibañez), he may not have reached his intended destination, but at least he will be free.

Riojas performed her new work Cuauhtli (Eagle) at the exhibition opening, and its sculptural component will remain on view throughout the run of the show. For the performance (pictured at top), Riojas turned herself into a symbol of freedom and independence, with a black stripe painted down the center of her face and upper torso. She hung suspended against the wall, motionless, wearing a cotton shift and 15-foot wings adorned with printed images of a bridge that serves as a two-way border crossing between her hometown of Eagle Pass and Mexico. 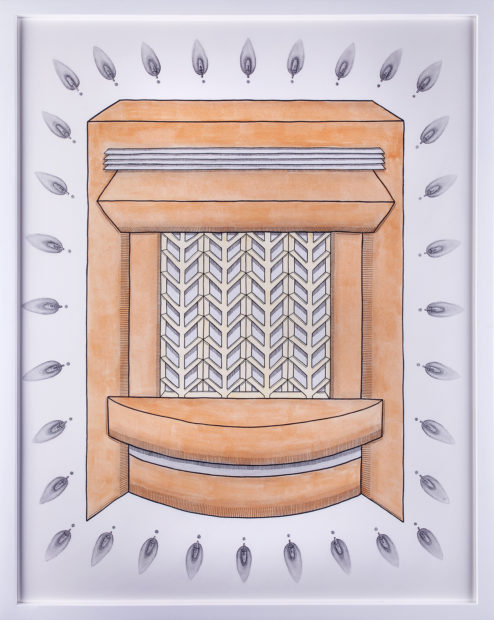 The exhibition showcases a number of outstanding emerging artists, such as Jose Sotelo and Jenelle Esparza. Sotelo’s drawings of space heaters, which were once used simultaneously for heating and as altars in his grandparents’ house in Mexico, are especially poignant. In Calentador 2, the subtle contrast between the sensitively colored heater and a surrounding framing device made up of softly drawn flames conveys both a physical and emotional warmth. 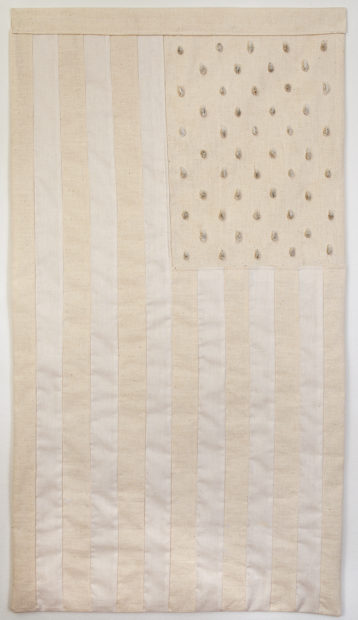 Using an entirely different approach, Esparza also pays homage to her grandparents, who were  cotton field laborers. Made entirely of cotton, with cotton seeds for stars, Esparza’s white American flag Meczla (It Mixes) symbolically celebrates her ancestry, while also fitting into a well-established art historical tradition that includes Jasper Johns’ white flag paintings of the 1950s and David Hammons’ African American Flag (1990), which is made of cloth in red, green, and black, the colors of the African National Congress.

The exhibition continues through January 2017.