A Preview of the 2016 East Austin Studio Tour 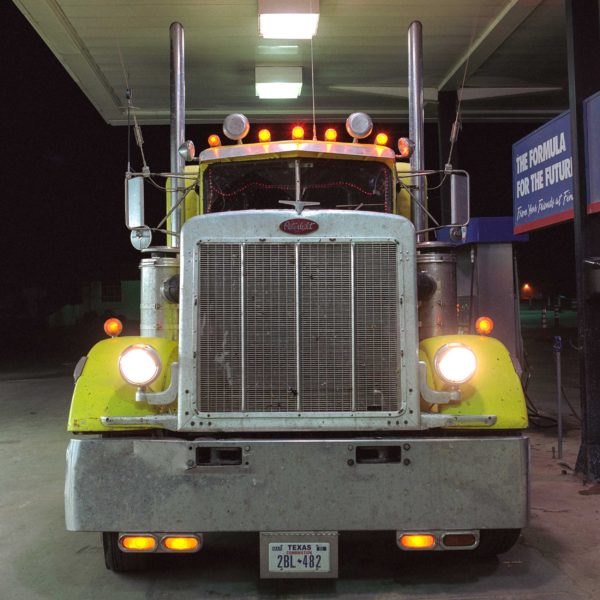 Now in its fifteenth year, the annual East Austin Studio Tour has become a cornerstone of Austin’s cultural scene, providing access to literally hundreds of artists working in a variety of media. The November tour has played a significant role in shaping Austin’s reputation as a vibrant arts community, and with works priced to sell, it offers visitors an opportunity to add to their art collection without breaking the bank.

“What began in 2003 with 28 artist studios has grown to include 534 participants, making this year’s tour the most robust in our history,” says Shea Little, Director of Big Medium and co-founder of E.A.S.T. “The Austin art scene has really developed over the years, and the tour is not only a reflection but a driving force of that growth. The expansion of the tour is impressive, but the evolution of the artists involved is what really excites us about E.A.S.T.”

With so many studios on parade, the tour can seem overwhelming. No worries. E.A.S.T. spans two weekends (November 12-13 & 19-20) so there’s ample time to see a wide range of work.

Here’s my own selection of a few must-see studios:

Keva Richardson’s paintings never disappoint. From black-and-white renderings of rural landscapes to total abstractions, her works are full of wanderlust and a sophisticated understanding of color. Her recent series, Highways, reads almost like computer circuitry or DNA visualizations. Capturing the artist’s memories of Texas and New Mexico landscapes as seen from a moving car, these complex compositional grids are intricately layered, with rhythmic lines punctuated by bursts of color. 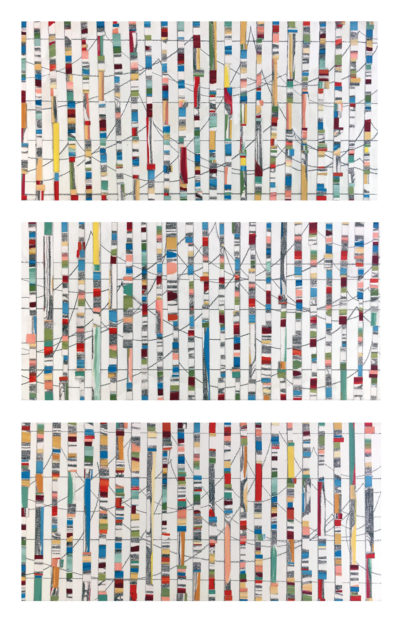 A John James Audubon for the 21st-century, Jules Buck Jones is known for his quirky but impressive representations of fauna. His images of foxes, eagles, snakes, and even fantastical and hybrid creatures are articulated through highly gestural markings in watercolor or ink, often incorporating gorgeous collage. In frenetic swirls of color, his animals emerge from dense jungles or primordial, swampy landscapes, perhaps inspired by Jones’ time as artist-in-residence at the Everglades National Park in Florida. 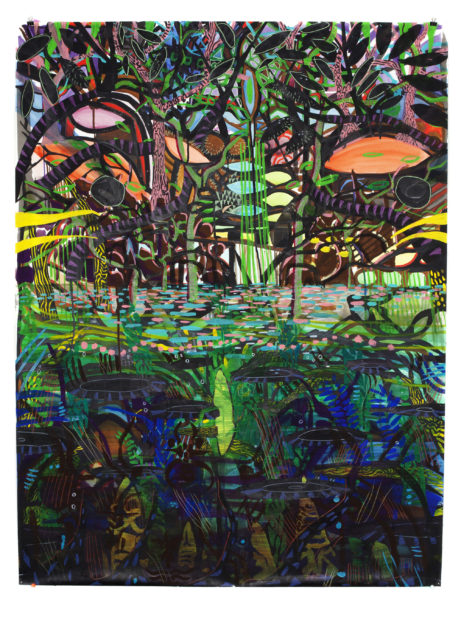 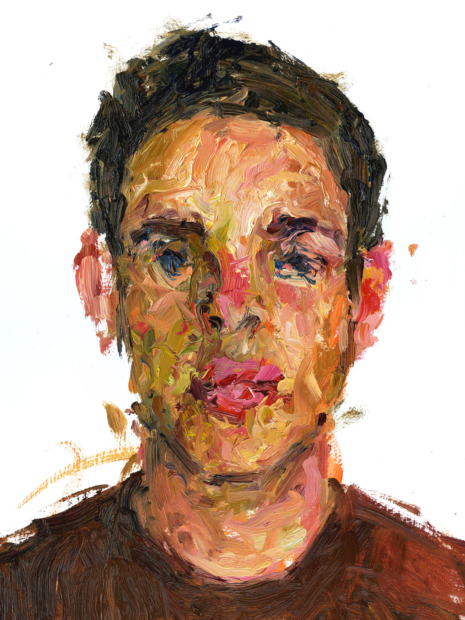 For those with predilections for the figurative, Robert Lee Summerlin’s studio is the place to visit. Summerlin’s lush portraits are reminiscent of Jenny Saville or Lucien Freud, with heavy impasto and fleshy hues that create not only a likeness of his sitters, but a psychological snapshot of them as well. As Oscar Wilde noted, however, “Every portrait that is painted with feeling is a portrait of the artist, not of the sitter… It is not he who is revealed by the painter; it is rather the painter who reveals himself.”

Charles Henry’s large format analog and monochrome photos of iconic Texas landmarks and landscapes are masterful exercises in light and composition. His series such as A Place Called Happy and Permian Basin find beauty in the often-overlooked detritus of small-town America. Many of his photos capture mom-and-pop establishments and locales that are rapidly being replaced by big box stores. These images function beyond mere works of art; they are important documentation of a disappearing era in our country’s history.

At his eponymous gallery, Bale Creek Allen will be showing photographs (and more) from the Texas portion of his My America series. An ambitious undertaking, the series is a survey of the entire United States, starting with Texas. Over the course of five years, Allen will create fifty bodies of work that “explore the things that make each state unique and the things that make all 50 states one America.” The work will be shown separately, state by state, and then ultimately together as one large installation.

Though her studio is not located on the tour, Christa Blackwood will be exhibiting at both Photo Methode Gallery and Agave Print. Blackwood employs old-school printing techniques such as photogravure and tintypes to create poetic and often haunting portraits and landscapes. Her most recognized works feature nudes in the out-of-doors with red or hot pink dots or squares placed over them—her contemporary take on traditional landscape photography.

Sculptor Paul Clarence Oglesby’s cast-concrete columns are inspired by desert plants and botanical fossils. The artist collects found and recycled objects and then hand-casts them in concrete as pods (varying from ½ inch to 500 pounds) that can be arranged vertically or horizontally. In his series titled Zygo, which means “connected” in Latin, the sculptures are crafted as modular and interchangeable systems, with repeating motifs that range from a couple of feet to well over twenty feet tall. 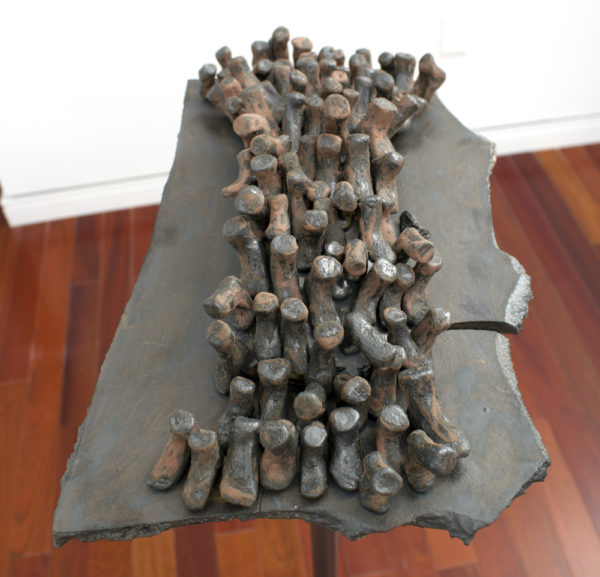 While ceramics are less represented than other media on the tour, there are always several ceramic studios worth visiting. Erik Tragus, for example, pushes the medium to its limit with his innovative use of sustained, high-heat wood firing. The technique, which he honed at the University of Kansas, uses wood as a source of fuel instead of gas or electricity. It produces a natural ash glaze, unexpected but often beautiful color variations, and even scarring (or flashing) on the pottery. Other variables of the process include the type of wood and clay used, the weather, and the duration of the firing. Every firing is different. Though the technique offers less control than a traditional kiln, the rewards are great, with objects that are not simply finished by the firing process, but revealed in it.

Works by Carla Hughes, another ceramist with noting, range from traditional vessels to geometric trays to biomorphic bowls. A graduate of Penland School of Craft, Hughes straddles the line between sculpture and ceramics with works such as Cluster, an assemblage of hanging wood pieces, or Trample, which privileges form over function.

This year, the folks at E.A.S.T. have partnered with a wide range of community organizations to augment the studio tours. Highlights include a Public Art Crawl on November 12 hosted by the city’s Art in Public Places program. Participants will tour ten public artworks, all part of the TEMPO 2016 installations, and will meet several of the featured artists. AIPP has also organized a lecture with Austin Kleon, the New York Times bestselling author of Steal Like An Artist, on November 17.

Every year, E.A.S.T. gets bigger, better, and more sophisticated. And in the community, new galleries are opening, more artists’ collectives are forming, public art is expanding, and there are various new city initiatives aimed to benefit creatives of all types. Austin’s visual arts scene is slowly but surely coming into its own.