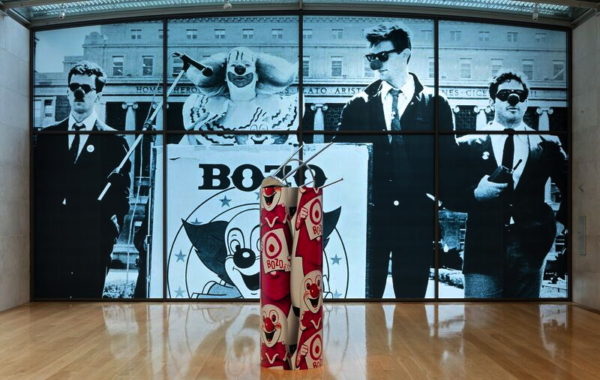 Clowns are having a moment. Check your Instagram. Fans take note: the Nasher’s got your Bozo fix. When curator Julie Rodrigues Windholm began working with Kathryn Andrews in 2014 on the inaugural run of Run for President at the MCA Chicago, Trump’s candidacy had yet to materialize. “We never could have imagined how prescient the show would be,” Windholm says. Similarly, since picking up the show, Nasher director Jeremy Strick asserts:

“None of us had anticipated that the particular election this exhibition coincides with would be so remarkable in the sweep of American history and would in so many ways substantiate some of the themes and ideas addressed.”

So why does the serendipity of these topical interstices feel so ¯\_(ツ)_/¯? Does Andrews’ prescience fail to imagine the impact of our current electoral shit-storm? Do we now hold in contempt anything less cynical than reality? In a show with this many reflective surfaces I find myself asking questions. Andrews provides few clues, and hides others. Initially innocuous readings give way to unease. Like a clever Hollywood script, Andrews’ Run for President tells a story about telling stories.

“Increasingly we live in a world where nothing makes any sense. Events come and go like waves of a fever, leaving us confused and uncertain. Those in power tell stories to help us make sense of the complexity of reality. But those stories are increasingly unconvincing and hollow.” 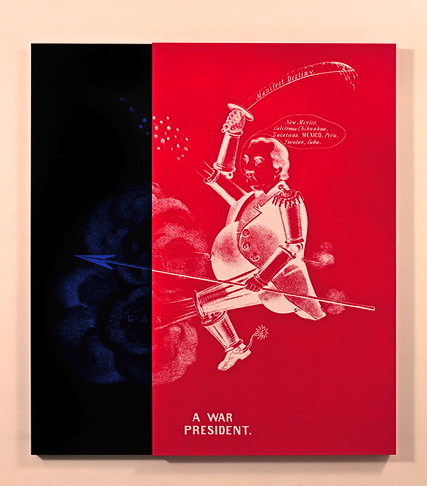 Often when an artist has a few tricks (politricks?) up their sleeve, the phrasing is a tired analogy, but Andrews has literally crammed certified film costumes into the side frames of giant historical campaign posters. Worn by characters from films by ‘90s maximalist auteurs like Tim Burton, Sam Raimi, and the Wachowskis, these suits offer audiences a codex for unpacking a breadth of discussion inside the show, beginning with TRINITY FOR PRESIDENT. 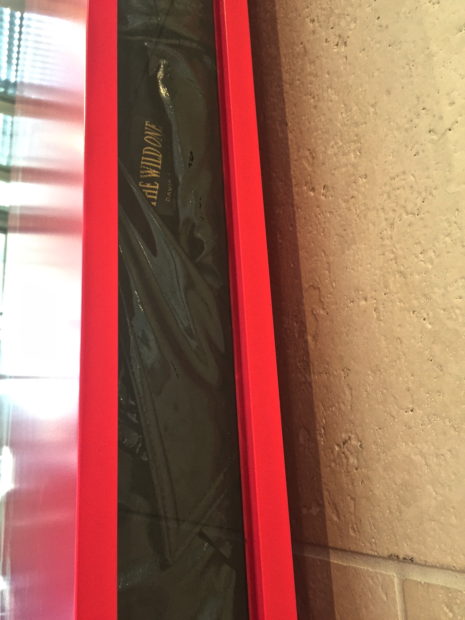 Detail from TRINITY FOR PRESIDENT

I pity the fool who doesn’t know that Trinity leads Neo, the Chosen One, to Morpheus and out of the Matrix in 1999’s The Matrix. Her inclusion grants carte blanche to “follow the white rabbit,” like Neo, to whatever end of the Lewis Carroll reference you see fit. Take the Red Pill. Cue the bullet-time.

Less leading is the similarly war-themed campaign poster THE JOKER FOR PRESIDENT. Perhaps alluding to our dire need for campaign finance reform, Jack Nicholson’s Joker leads a parade of floats tethered to toxic balloons into downtown Gotham, but at least has the decency to shower the public with millions in cash before pulling the ripcord and poisoning everyone. Trump’s website won’t even let you cancel recurring donations. 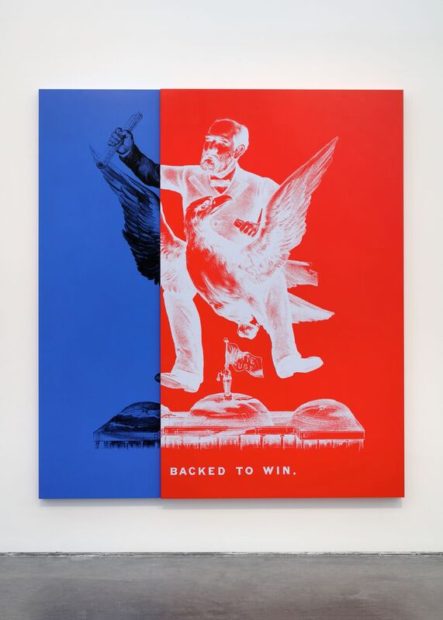 No trip down this rabbit hole would be complete without a 9/11 reference. New York City’s most beloved vigilante weaves paranoia in SPIDER-MAN FOR PRESIDENT. No contemporary comic-book film franchise has faced a more political run than that of the original wall-crawler, who will have had different actors don the tights for presidents Bush, Obama and Clinton. (Same shit, different (pant)suit?) Raimi’s first Spider-Man notoriously featured an excised sequence where a gang of bank robbers fleeing a heist via helicopter is apprehended by Spidey after he ensnares their chopper in a web strung between the twin towers of the World Trade Center. Shown in a trailer released early in 2001, this deleted scene points to an interpolation between Hollywood and the State and the stories they spin for each other. 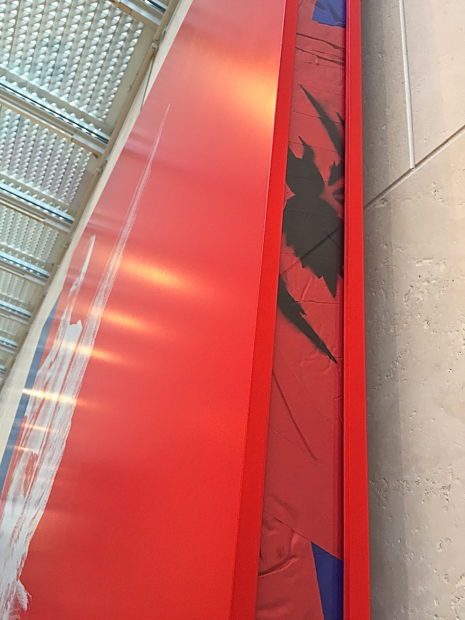 Detail from SPIDER-MAN FOR PRESIDENT

A tacit handshake? Some agreed-upon dream that now includes yearly prestige pics like Flight 93, or Zero Dark Thirty? The Oscar-baiting Sully, still in theaters, can’t resist peppering movie-goers with hijacking-reminiscent “What if?” dream sequences depicting planes bearing down into the New York skyline. 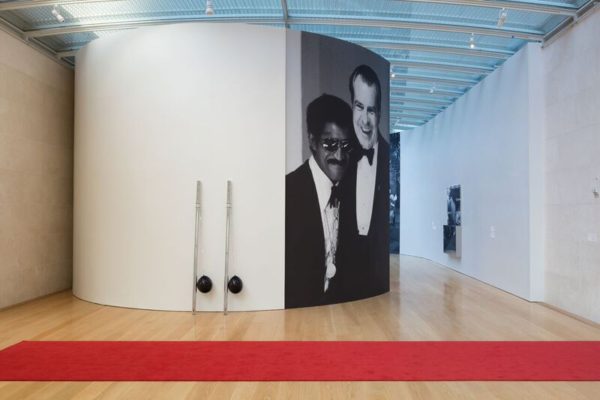 Sammy Davis Jr. made his big-screen debut at the age of seven in 1933’s Rufus Jones Runs for President, in the title role. Andrews throws his mustachioed visage to the rafters in a candid photo from 40 years later. Posing with President Nixon at the White House, Davis enjoyed the distinction of first black man invited to spend the night in residence, not a decade after the Civil Rights Act of 1964. 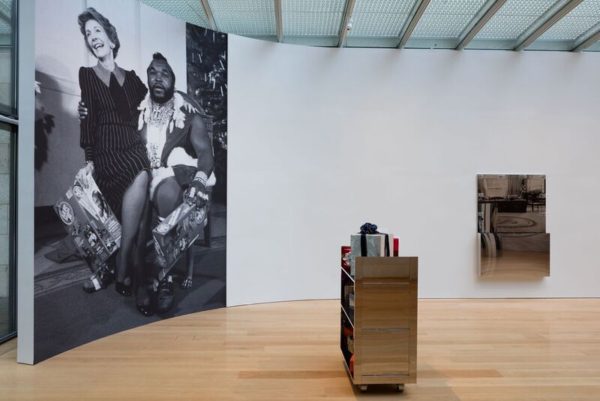 On the opposite wall, Nancy Reagan sits on Mr. T’s lap at the annual White House Christmas Party ten years later. The two had determined to join forces for the betterment of their individual anti-drug programs. Between these towering photos sits LETHAL WEAPON, a stainless steel sculpture housing a prop handgun from Richard Donner and Shane Black’s original buddy cop movie of the same name. Andrews’ reflective nod to tokenism is obscured in darkness, no finger on the trigger, no one to indict, pointed straight at you. Whereas action comedies like Lethal Weapon—which pair black and white police officers—broadly address issues of race in America, Andrews’ work hesitates to sentimentalize the genre. Nor does it lead. 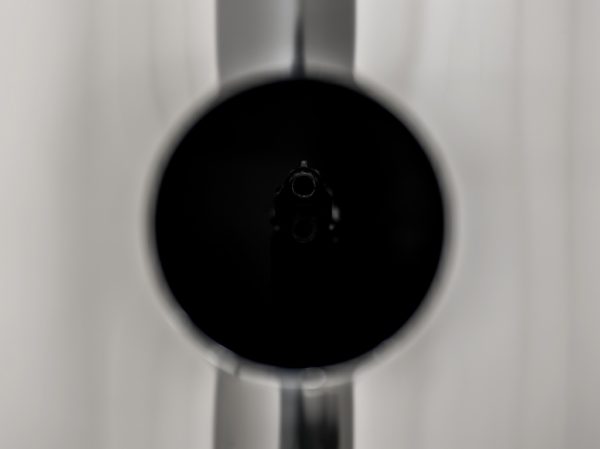 In Jill Bennet’s Practical Aesthetics, the author examines, post-911, the slippery and perhaps old-fashioned concept of sincerity in media images—a kind of post-modern simulacrum. The politicians’ gestures captured in these images challenge our “congruence of avowal and actual feeling or belief.” Bennet means that:

“[Sincerity] is not a property or characteristic of an individual, revealed by or made the subject of media; it is a function of ‘being in medium.’ An artwork or film thus exhibits and exposes gesture in its mediality.”

It was Andrews’ aim, to prevent her work from being pigeonholed, that Run For President be conceived to eliminate the artist’s gesture—sourcing images “with pre-existing gestures that already have value in culture.” She empowers the audience to find their own narrative, offering:

“I wanted to point to the impact of socialization on seeing—how we give up an experience of difference when we assume that seeing occurs from a neutral position.” 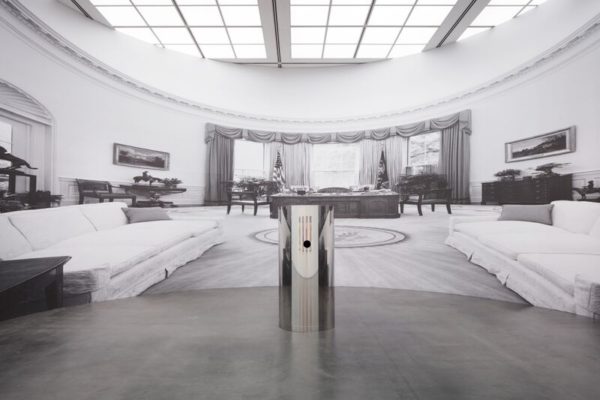 LETHAL WEAPON just happens to sit inside a massive concave 3D rendering of the Oval Office from Ronald Reagan’s administration. Depicting the ultimate merger of Hollywood and the State so far, this absurd structure wraps around the viewer, placing him inside the fabled office. The effect is noticeably limited, however. Not unlike the fisheye of Google Street View, the audience is never fully transported, and is instead stuck negotiating the incompleteness of the illusion, navigating the space in fits and starts.

Perhaps compelled by Pedro Reyes’ concurrently running conceptual sculpture, Plato’s Cave, at Dallas Contemporary, an uncanny appropriation of Plato’s allegory from Republic manifests nicely in this piece and in Andrews’ show at large. The philosopher’s story depicts a row of life-long chained prisoners who face the back wall of a cave, watching light and shadows cast from an entrance behind them. Unable to turn their gaze to see the people and events of the outside world, they instead assign reality to shadows. Plato crafted this awful vision to inspire responsibility in those who escape their chains to stumble out into the light:

“At first, when any of them is liberated and compelled suddenly to stand up and turn his neck round and walk and look toward the light, he will suffer sharp pains; the glare will distress him, and he will be unable to see the realities of which in his former state he had seen the shadows… . Now, when he is approaching nearer to being and his eye is turned toward more real existence, he has a clearer vision—what will be his reply?… Wherefore each of you, when his turn comes, must go down to the general underground abode, and get the habit of seeing in the dark. When you have acquired the habit, you will see ten thousand times better than the inhabitants of the den.”

Through Jan. 8 at the Nasher Sculpture Center, Dallas.