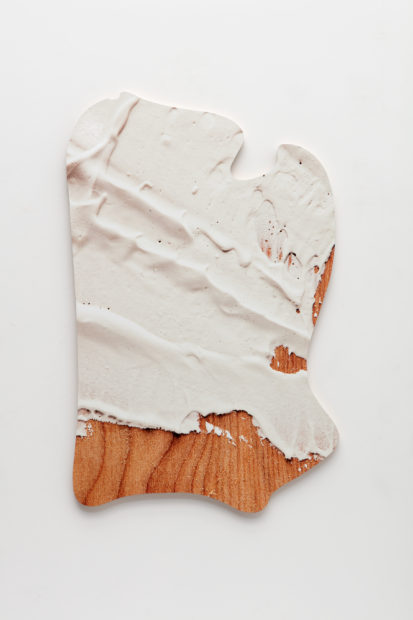 Just as painting has continued to find things to do after it was relieved of its duty to mime the world, photography as an artistic discipline is finding new questions to ask and methods to employ since the role of documenting has now been taken up by Google… and also everyone, everywhere, all the time. Three of the many gallery shows that opened in Dallas last month feature locally based artists who work with photography in ways that converge on painting and sculpture. I’ve been thinking about the work of Allison V. Smith at Barry Whistler, Kevin Todora at Erin Cluley, and Kalee Appleton at 500X. In very different ways, they (and many others), are reformulating the photographic object in a world of new and unstable material metaphors. 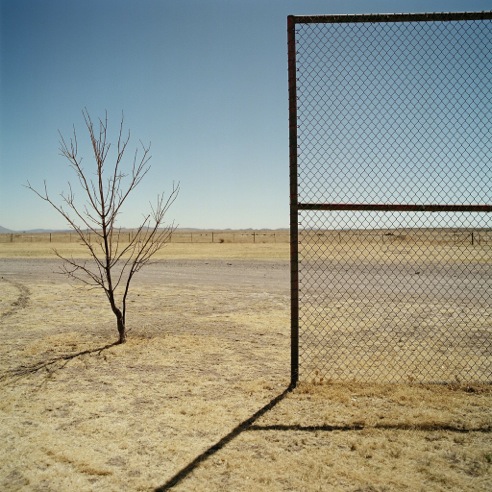 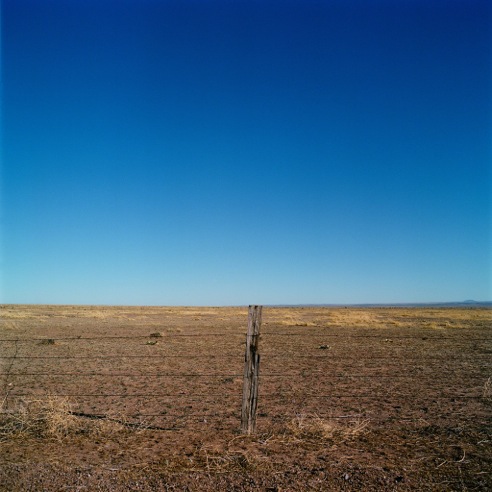 Allison V. Smith’s work refines a traditional way of stretching photographs into the territory of abstract painting. Her show, Levelland, is a group of starkly beautiful compositions that picture desolate places while calling up the modernist sublime of Piet Mondrian or Barnett Newman. Their imagery collapses into the structured space of abstraction; their objects melt into form. Her piece Backstop makes a line-drawing out of a chain-link partition and a small leafless tree facing the blinding emptiness of West Texas space. Texas Time reduces the landscape to rectangular packages of sky and land, with a single dangling fence post perfectly and perversely kissing the horizon. The power of these compositions is wrapped up in how flat shapes relate to the square. Even so, they still hold onto a specificity of place that breathes like intimate portraiture. They are about presence and absence. In other words, they dabble with the virtual, but remain anchored to a moment in time and place. 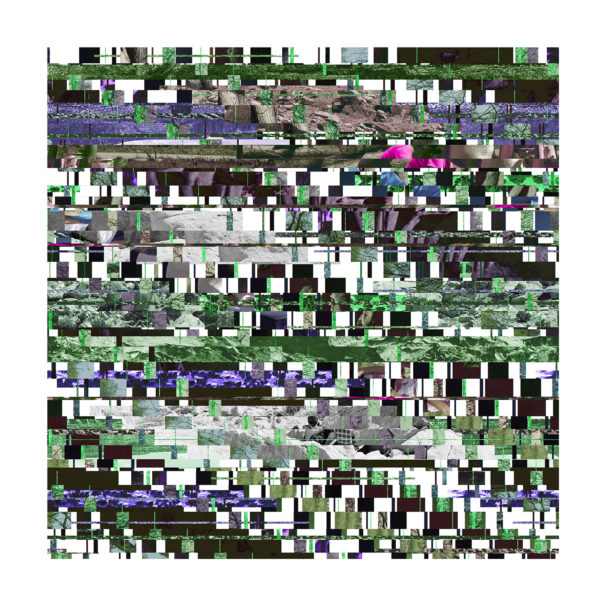 Kalee Appleton has done a variety of things with photography that address its materiality. In her thesis show at TWU a couple of years ago she printed photo-abstractions made by manipulating the digital files of personal photos sent to her by volunteers and friends. As the images’ DNA was tinkered with, the resulting “pictures” traded in their illusions of space for aberrant crystalline structures hidden in their code. Works like Untitled 8 and Untitled 9 could be thought of as mechanical hallucinations, or trauma. To me they are digital quilts, weaving memory into a new object. 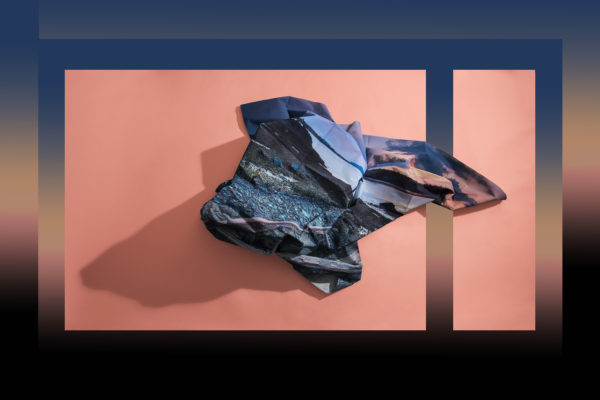 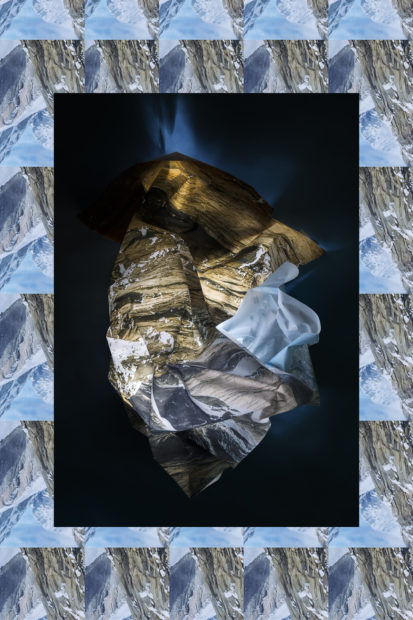 In a more recent series called Surrounds, Appleton takes large photographic backdrops from portrait studios and plays with their object-ness. Originally meant to be re-photographed behind pimply teens or crying toddlers to transport them to a perfect blue sky or enchanted forest, these backdrops are instead folded or crumpled and photographed as the subject. Appleton then builds her own “backdrops” for the object with color-fades, drop shadows, and layered effects that sample and distort the colors and patterns of its now compromised imagery. It’s a new configuration of the “truths and lies” that have always been a part of photography. 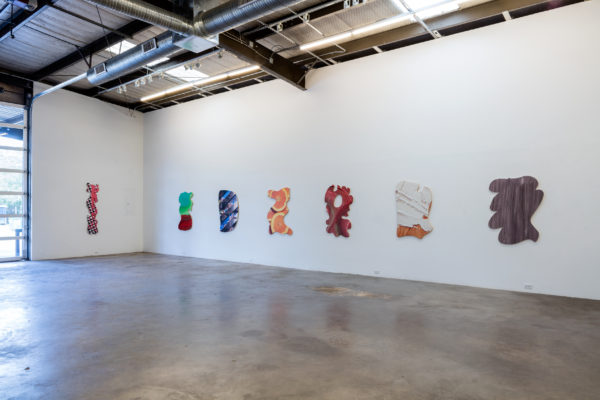 Kevin Todora’s sleek, photographic objects reframe the image in sculptural terms and share a vernacular with a vein of current abstraction that seeks new ways to pair up the high and low in materials, craft, and technological references. For his show Gaslight he mounts lush, scaled-up imagery of plants, fruit, woodgrain and juicy brushstrokes of paint onto playfully shaped plywood cut-outs: hyper-real illusions grounded in brutish sculpture. 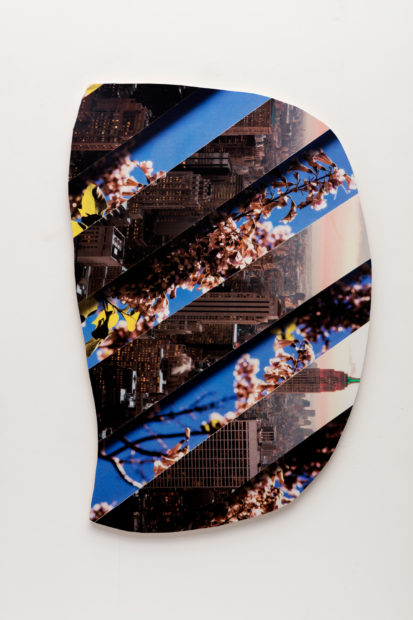 Todora’s work exists in a strange contradictory space; both present and unplaceable. The shapes within and without work against each other and un-sync the object. His imagery confuses the depth of its illusion by appearing as a field at the same angle and location of the actual surface of the photo. Figure acts as ground and competes with the ground of the substrate for primacy. It’s a twist on a type of trompe-l’oeil space expanded on by Pop artists like Warhol and Lichtenstein who painted comics and product labels and other already-flat objects into the shallow space of their paintings. By bringing the surface and the illusion in line with each other, they hit upon a new kind of blended perception. It’s a precursor to the virtual piece of paper on my laptop screen that I’m typing this into, an object totally freed from the inconveniences of time and place. 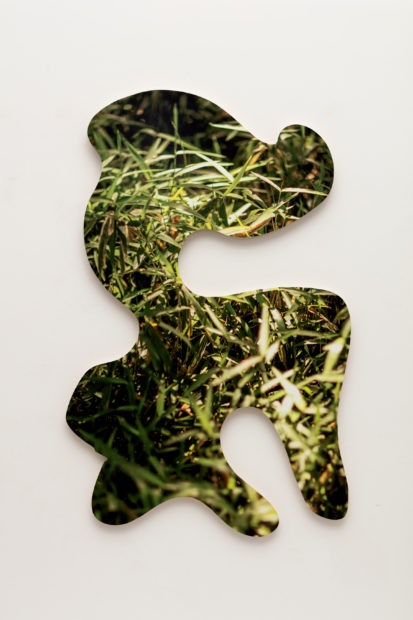 As amateur photography migrates to screens and hard drives, the common photograph exists less and less in the mute world of furniture and “stuff”. Images were once shared like fruitcakes; now they travel like rumors, or utterances, at the speed of thought. In a way, we seem to be making the external into a more seamless extension of our psychologies. And this is the difference I see between how society and artists generally conceive of matter as a vehicle for ideas. In the logic of society, an object’s texture in space and time are speed bumps, problems to be solved. For the artist (and perhaps especially the photographer), these limitations are explored and celebrated; they are places where thought slows down and pools up, where we let the world enter us.