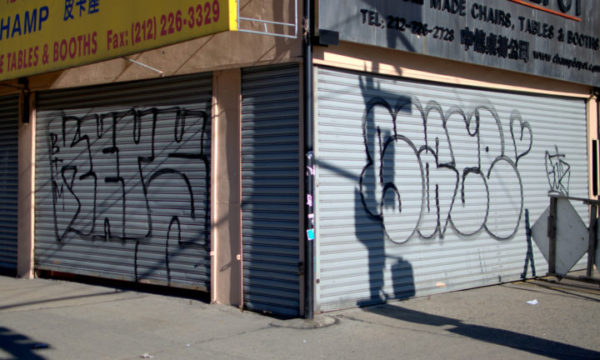 Via The Fashion Law: Dash Snow, the late great-grandson of John and Dominique de Menil (Snow died in New York in 2009 at age 27) is in the news again as his estate is suing McDonald’s for copyright infringement for unauthorized use of a Snow artwork.

McDonald’s has been using images of graffiti (most of it unrecognizable) as decor of hundreds of its restaurants, but one of Snow’s graffiti works seems to be at the center of the display. Jade Berreau, who was Snow’s girlfriend (and is the mother of their kid) is in charge of the estate and has filed a suit in the U.S. District Court for the Central District of California. 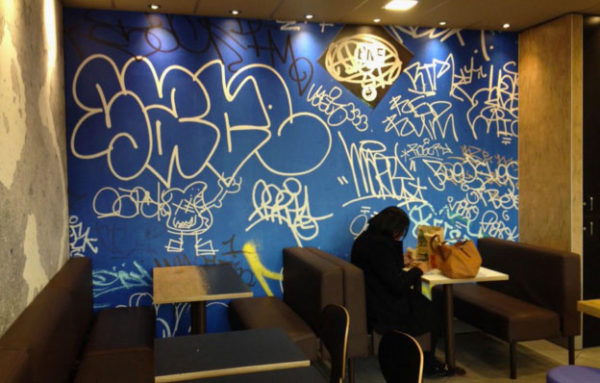 An interior shot of a McDonald’s

The suit reads in part, that McDonald’s is “…using his [Snow’s] name and signature in a manner suggesting that Mr. Snow created all of the surrounding artwork (which adorns the entirety of McDonald’s graffiti-themed restaurants) … [including] a stylized signature of his pseudonym ‘SACE,’ which clearly includes a brazen copy of Mr. Snow’s work.” It goes on: “Mr. Snow’s famous work is so prominently placed, it was the only element singled out and spotlighted in media coverage surrounding McDonald’s display campaign. ”

Snow’s family insist that Snow would have never allowed his work to be used this way by a corporate entity, and McDonald’s has thus far refused to remove the work.

This particular suit is happening just after similar lawsuits have been filed against Moschino and Roberto Cavalli “for copying the work of graffiti artists,” specifically Joseph Tierney in the case of Moschino, and Jason Williams, Victor Chapa, and Jeffrey Rubin (aka Revok, Reyes and Steel) in the case of Cavalli.

Dallas Contemporary: taking the street out of street...