Zollie Glass Studio, Facebook, and the Hunt for Marbles 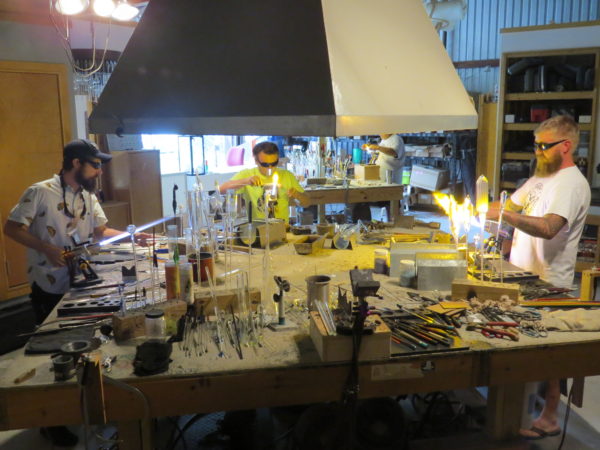 Lately artists, both trained and untrained, have been turning social media sites like Facebook and Instagram into platforms for interactive art projects. In San Antonio, one of the longest running of these participatory endeavors is known as Esferas Perdidas, or Lost Spheres. Conceived in late 2012 by glass artist Sean Thomas Johnston and launched in January, 2013 with the help of Jake Zollie Harper and Justin Parr, Esferas Perdidas is essentially a game for marble makers and marble hunters.

To become involved, one can join the Esferas Pedidas Facebook group, whose page has become a repository for images of hidden and found marbles. In the offline world, the nexus for the group is Zollie Glass Studio. Opened in 2009 in a space behind the former Gallista Gallery (now occupied by 3rd Space Gallery; Gallista has moved to a nearby building), Zollie Glass started as a studio and gallery for Harper and other glass artists. Having outgrown the space after a few years, Harper moved the operation in 2012 to its current South Presa location.

Harper has been blowing glass since around 1998, when he became inspired to do it himself after watching a glassblowing demonstration. With Zollie Glass Studio, he created a place to make and sell functional objects, such as lighting fixtures and glass tumblers, and to rent space and tools to other glassblowers and to offer classes. 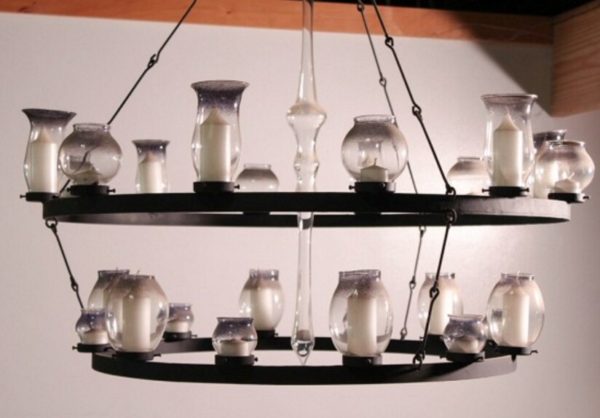 On occasion, Harper has veered into the contemporary art arena. In 2011, he held a temporary exhibition at San Antonio International Airport, where he filled display cases with several of his characteristic glass and wood spore sculptures and a visually ironic sculptural grouping of a hammer and nails, with the hammerhead and nails made of clear glass. Harper’s contemporary art sensibility is also apparent in his chandeliers, some of which share affinities with the work of artists who make sculptures by grouping together drinking glasses or bottles, such as Maria Porges, George Stoll, or Josiah McElheny. In Harper’s “candelabra chandeliers,” each light bulb is set within an individual glass vessel that is arranged with others to form a larger composition. 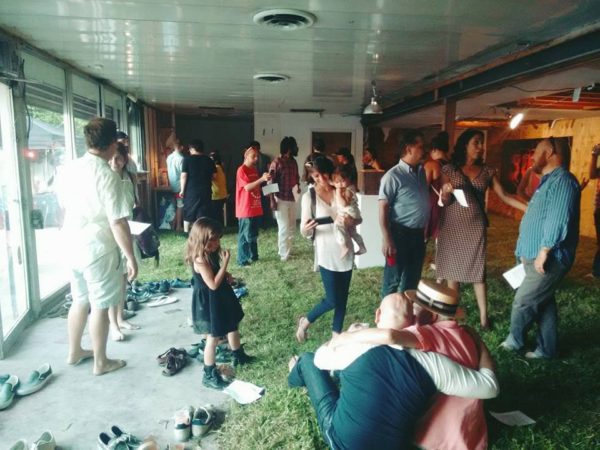 Parr, who is perhaps best known as the “co-conspirator” (co-director) of Fl!ght Gallery (along with Ed Saavedra), has worn many hats as a major force within San Antonio’s contemporary art community. For many years, he has worked as a photo-documenter of opening receptions and social events and, as an artist, he has produced some particularly memorable series of photographs taken on road trips. More recently, he created a pop-up installation of green grass and wall-mounted photographs in a former gas station/convenience store to commemorate its closing, and a series of abstract paintings based on rules for drawing that he wrote as a child. 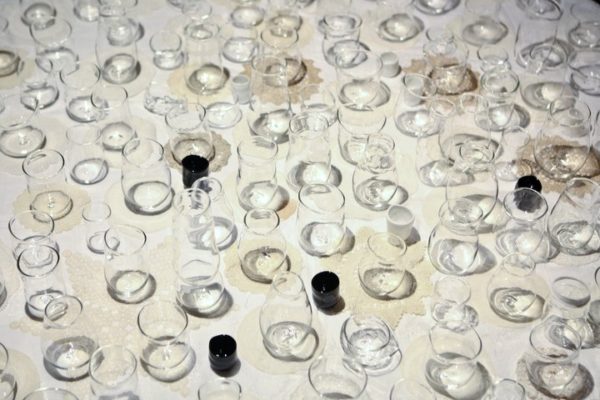 Although Parr had made a few glass objects early in his career, his interest in the medium didn’t really gain momentum until Harper opened Zollie Glass Studio. Energized by the studio environment, Parr made some handblown borosilicate (aka Pyrex) drinking glasses for his own use, and soon found that friends were encouraging him to make more. Distinguished by subtle irregularities in shape that make each glass unique, the glasses soon became a popular local commodity. As Parr continued to explore the medium of borosilicate, he experimented with unconventional methods of heating and cooking it, cooling it overnight in an annealing kiln, and then photographing the abstract patterns of the resultant glass rocks to produce prints that suggest unexplored sections of the universe. In 2012, for the closing exhibition at the now defunct Unit B Gallery, Parr wall-mounted several of these photos and suspended a clear glass sculpture from the ceiling that interacted with them to simulate a psychedelic merging of light and color. 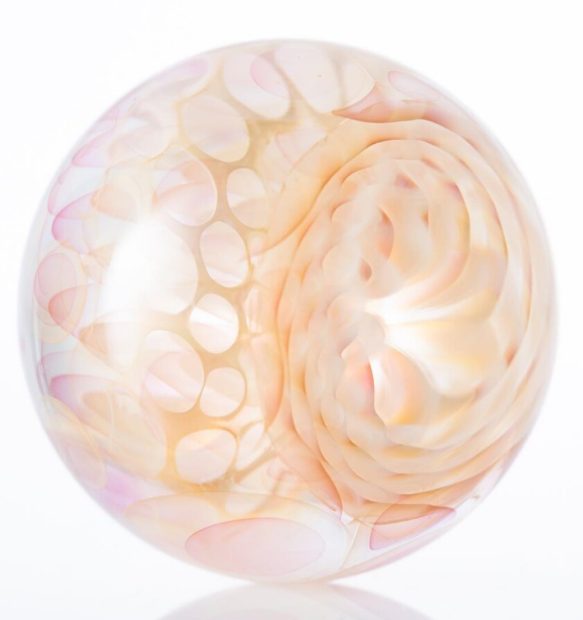 The prime mover behind the Esferas Perdidas project and the member of the Zollie Glass group who is by far the most dedicated to marble making is Johnston. As soon he began blowing glass in the studio, Johnson became obssessed with the idea of making marbles, so Harper taught him the process. Making a marble is a labor-intensive procedure that requires an eye for detail. Working with glass rods and bits, the artist usually builds the marble from the inside out by directing the torch flame to move colors about and shape various patterns, which form layer upon layer. Chacteristically, Johnston’s marbles contain tiny crystalline universes that resemble flora and fauna. Earlier this year, Fl!ght held an exhibition of Johnston’s black-and-white marbles which, according to Parr, are difficult to make and require tremendous skill and patience. 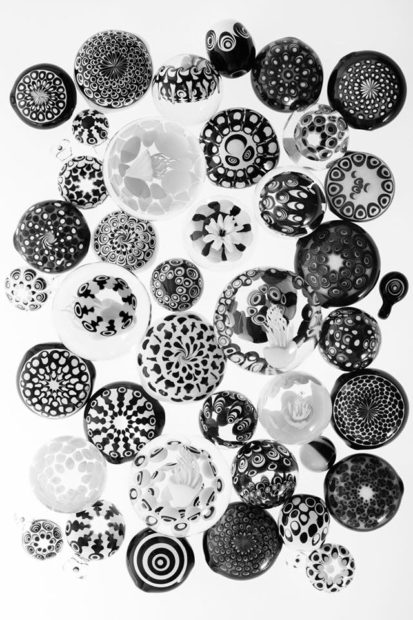 So how did the idea for Esferas Pedidas come about? In 2010, Johnston joined Facebook and started posting images of his marbles on the site. Harper and Parr were already on Facebook and the three started talking about the power of social media. During the same period, Johnston was frustrated that his marbles were not selling, so he was considering hiding them and challenging people to find them. In response, Harper told him about the well-known glass artist Josh Simpson’s Infinity Project: since 1976, Simpson has been hiding marbles in secret spots all over the world as a gift to whomever finds them. (He’s even dropped some from the window of his private airplane.) As Johnston further researched the idea, he learned about a similar project by Wisconsin glass artist Chad Christenson.

Esferas Perdidas was officially launched in January of 2013 when the organizers sent group invitations to about 400 Facebook friends and announced that they would hide marbles around Southtown as part of that month’s First Friday art event. Although only 50 or so people joined the group during its first week, the project received a boost in March of that year, when the San Antonio Current published an article on Esferas Pedidas and collaborated with its leaders by producing a map with locations of hidden marbles as a Contemporary Art Month activity. At that point, membership rose to 2,200 and, following a subsequent article in the San Antonio Express News, it grew by another 1000. Today there are more than 8,000 members, mostly from San Antonio. Perusing the site can be a bit overwhelming, as there are thousands of photos taken of marbles, usually shown at the location where they were hidden or in the hands of those who found them. 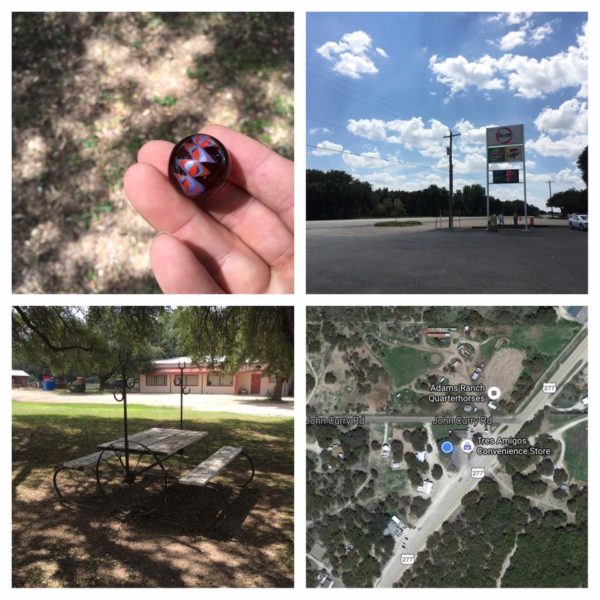 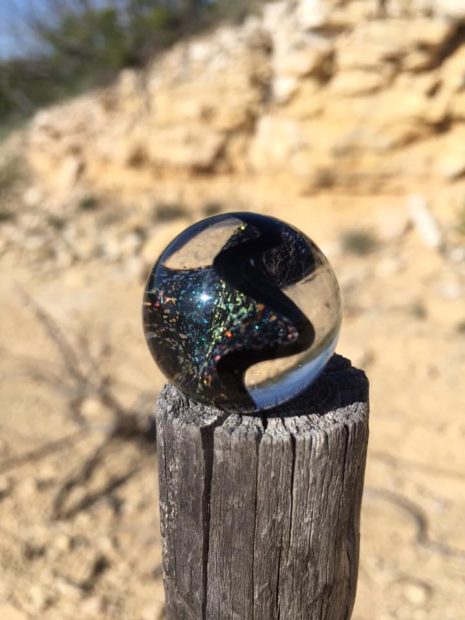 In 2014, the Esferas Pedidas principals were invited to hide marbles throughout the grounds of San Antonio’s annual Luminaria arts festival. The same year, they inaugurated their “Marble-In-Residence” programs, one for adults and the other for children. Initially commissioned by a marble hunter, the Marble-In-Residence marble is identified by having been etched with the ‘MIR’ logo, while the kid’s Marble-In-Residence marble is inscribed ‘KIDS’.  Once either has been hidden, its finder is required to photograph it, post the photos on Facebook, and bring it to Zollie Glass studio to be further etched with a mark recording that it has been found. Its new owner has to hide the marble for someone else to find; the process is repeated ad infinitum. 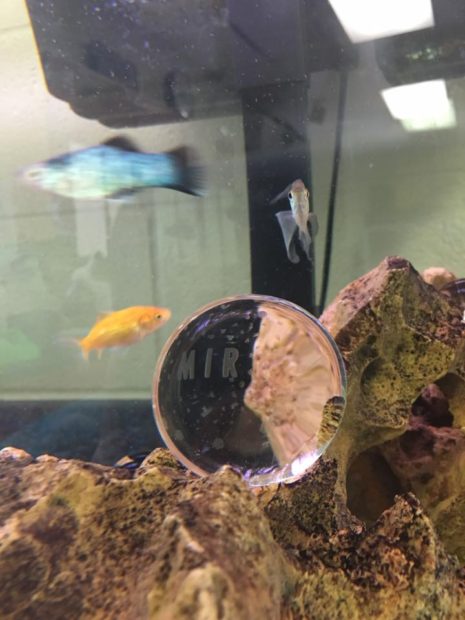 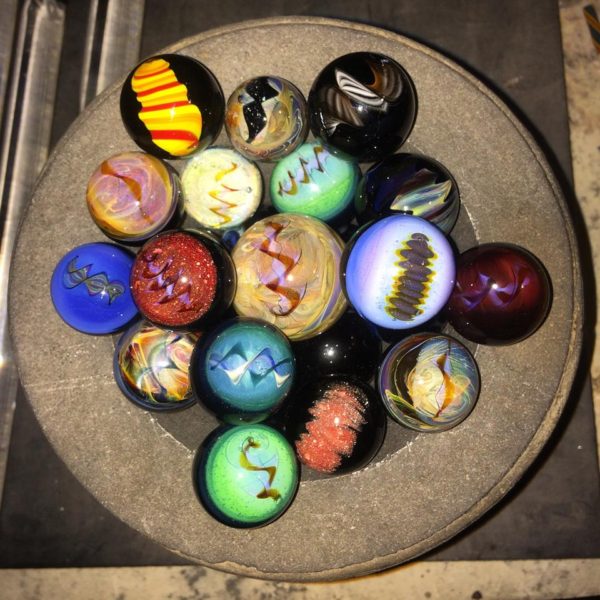 Johnston, Harper, and Parr are enormously pleased that Esferas Perdidas has brought people together in a way that transcends the confines of the group’s social media presence. Marble participants are drawn from all walks of life and, according to Harper, more than 50 of them have signed up to learn glassblowing at Zollie Glass Studio. 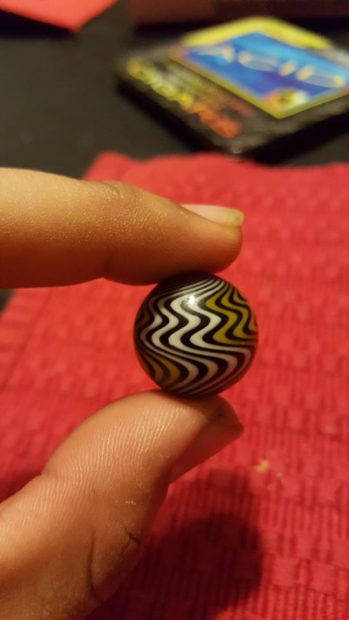