An $8 Million Koons Sculpture For a Sports Arena 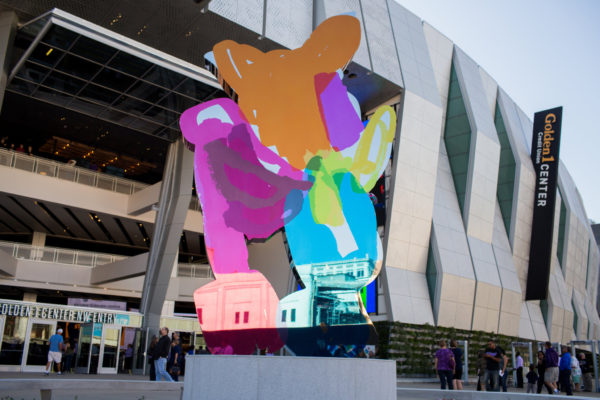 This is officially a thing. The Dallas Cowboys’ stadium and Jerry Jones certainly kicked off a trend way back in 2009: sporting areas need art these days. Today the New York Times reports that the new Golden 1 Center (home of the N.B.A.’s Sacramento Kings) in California has got itself a bright and shiny Jeff Koons sculpture.

The piece is 18 feet high and titled Coloring Book. Its looks like it’s installed at an outdoor, plaza-like entrance of the arena.

Via the Times: “The artwork, which was jointly purchased by the city and the Kings organization for $8 million, is made from mirror-polished stainless steel with a transparent color coating. Another version of the work was displayed on the roof of the Metropolitan Museum of Art in 2008.” The report also goes into why $8 million is a relative bargain for a Koons.

The Cowboys’ AT&T Stadium (which cost $1.15 billion to build) in Arlington kicked off the art habit and continues it, with dozens of commissioned permanent artworks by an international roster of artists (including Anish Kapoor, Olafur Eliasson, Jenny Holzer and Ellsworth Kelly, as well as some notable locals). Since then, big new stadiums in Miami, Atlanta, and Minneapolis (and now Sacramento) have followed suit in buying and commissioning artworks.

Koons, by the way, admits he does not follow sports.

This and That: Jeff Koons and Donald Trump