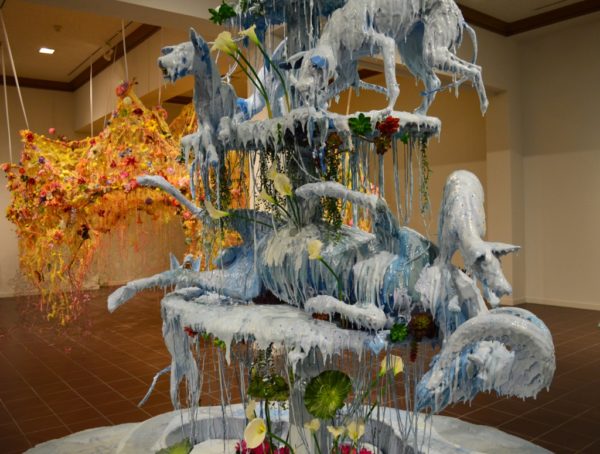 Bypassing its typical two-shows-at-once format, the Art Museum of Southeast Texas in Beaumont took down the wall dividing its galleries to permit multi-media artist Ann Wood use of the entire space for her over-the-top, three-dimensional works and large paintings. Compared to some other contemporary art spaces, AMSET’s gallery can feel limiting. But Wood’s pieces, made specifically for the high ceilings and expansive walls in the newly enlarged gallery, breathe new life into the possibilities of the museum. 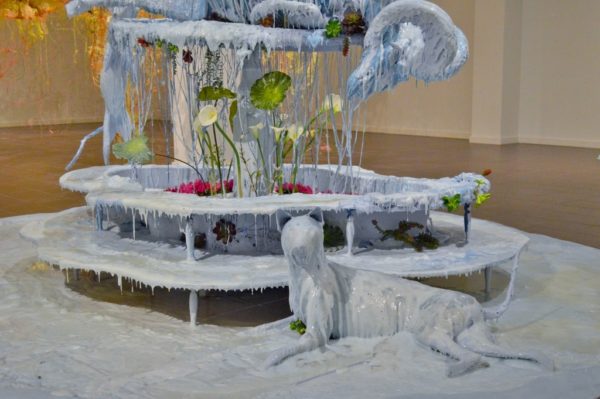 Citing Baroque and Rococo influences, Wood creates contemporary work that evokes the theatricality of Rubens and the ornamentality and soft colors of eighteenth-century French salons. Death is palpable in the decadent tiers of frosted, frozen carcasses in Fountain and the candy hearts set in blood-red resin oozing from the pile of dead rabbits in Still Life. In fact, many of the materials used in Curtain Call (the show’s title) touch on aspects of death and the funereal—from the taxidermy cores and decoy animals used in the construction of Fountain, to the artificial hair and flowers in the Nest installation, to the thousands of flowers cut from scrapbook pages that cover canvases depicting animals ripping each other apart. Animals in her works are engaged in violence (and often can’t be contained within the frame); the works call back to not just genre paintings of the hunt but also to an era when stories were shared primarily though oral traditions. With the focus of the show on mortality and the human condition, Wood’s use of materials and her narrative bent bring a feminist slant to a history dominated by male myth makers and storytellers. 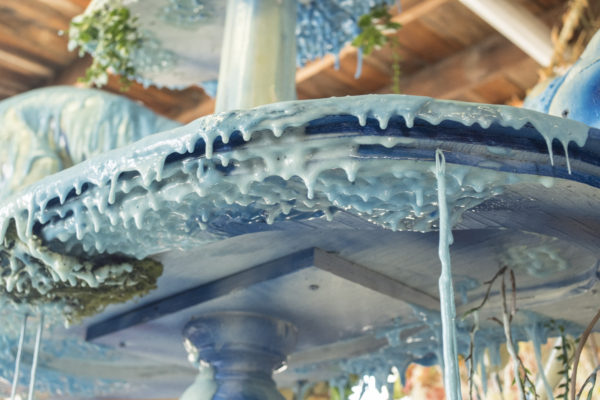 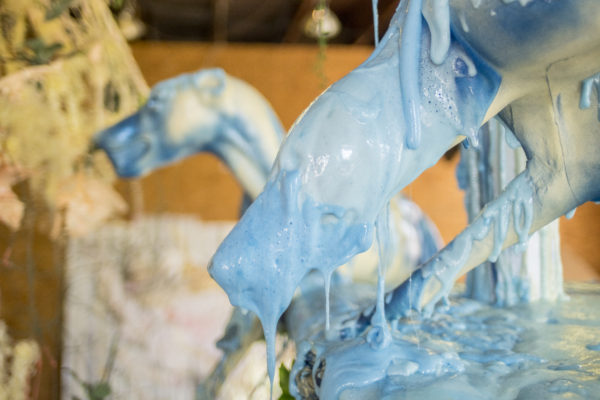 Wood’s explosive and glittery works are also heavy on expert and surprising craftwork: embroidery, scrapbooking methods, floral arrangements and puff-paint passages color her tableaus, and sometimes elevate the unlikeliest materials from common to fine. Another signature Wood material is FlexFoam-iT! X, commonly used in the movie industry for its malleable appearance and light weight. The foam is a crucial material in Fountain, allowing for the illusion that the sculpture is frozen, with blue drips of foam suspended from the edges of the tiers. 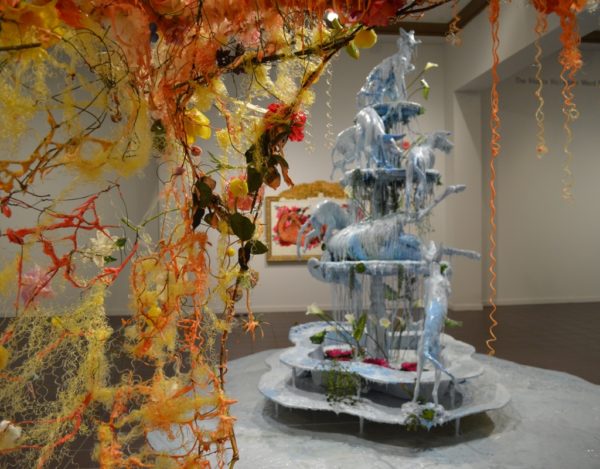 Wood is a Galveston-based artist who shows frequently in the state, including solo shows at the Lawndale Art Center in Houston (2010) and Women and their Work in Austin (2012). This is her first solo show in Beaumont, but she’s been featured in a group show at AMSET in 2014, and she had her Texas Contemporary Art Fair (Houston) installation featured at Lamar University’s Dishman Art Museum in 2013. 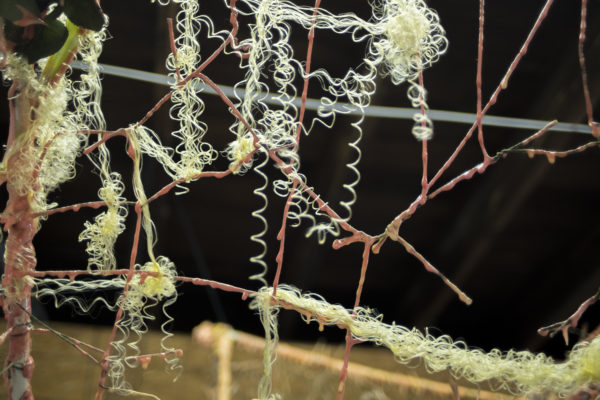 But Curtain Call not only puts her work center stage here; it’s also a notable leap forward in her developing themes of death and duality. The show is entertainingly grandiose—sometimes it feels as though nearly every square inch of work has been covered in sequins. 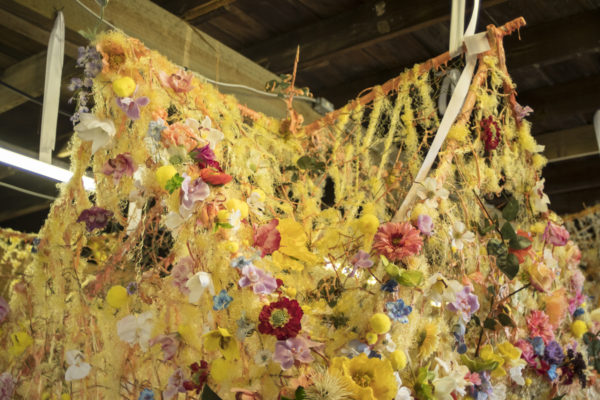 One piece, an installation titled The Nest, almost seems out of place with all the elaborate paintings and the Fountain, but’s it’s nonetheless an experience to walk through the hair house and to zoom in on the interwoven doll hair, faux flora and puff paint that creates the nest-like effect. The only material in the AMSET show that Wood has yet to completely master is resin, but even so the cracked (likely from Beaumont humidity) red resin spilling onto the floor from Still Life reveals a temporality of life and a violence resulting from circumstances outside of human control. It resembles both melted hard candy and fresh bloodshed. 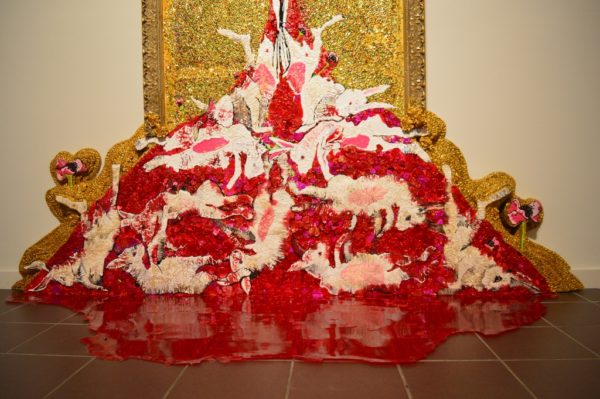 Curtain Call plays with dichotomies: masculine subjects with feminine handling; attraction to what’s shiny and sparkly versus repulsion in the show’s morbid subtext; fine art versus craft. But Wood’s work is, in the end, optimistic and conveys that there are still materials to discover and transform, and still commentary to be made on these narratives—stories that have been bouncing around in the collective conscious and unconscious for thousands of years.

On view through Nov. 27, 2016 at the Art Museum of Southeast Texas, Beaumont.