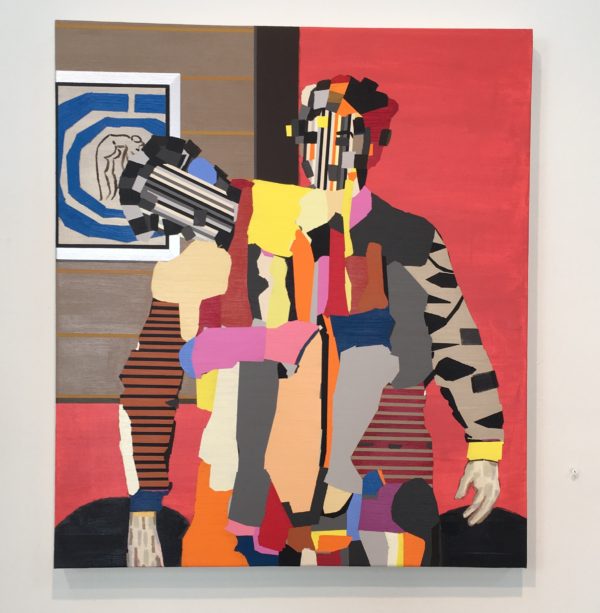 Different Version of You, acrylic on canvas, 33 x 29 inches

Matt Bourbon’s show of new paintings ends at Kirk Hopper in Dallas this weekend, and I urge you to see it if you haven’t. There are a couple of reasons for this. One is that I deeply admire that Bourbon keeps on painting (though what else is he meant to do?), and pushing and evolving, despite that he inexplicably hasn’t had any particular gallery to call home for a while. (He does exhibit regularly throughout the state.) The other is that his paintings, which have been very good for a long time, really do keep getting better. He’s landed at Kirk Hopper for now and I hope this is serving him well. 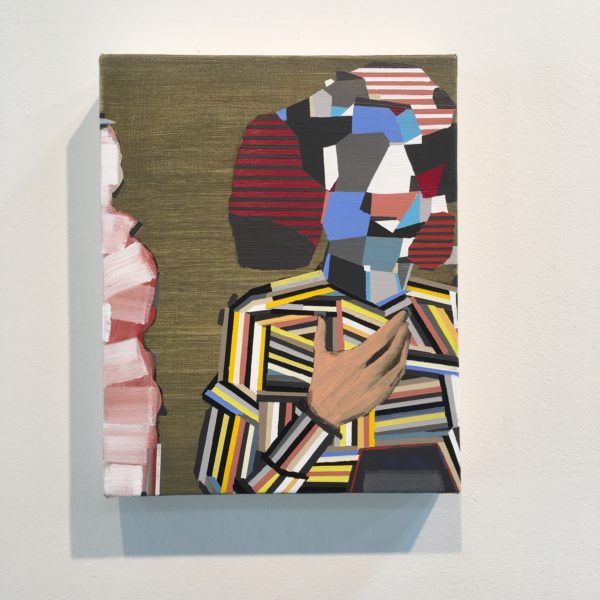 Bourbon’s been on the Texas scene since about 2000, and a professor of painting at UNT since then. It’s what brought him here from New York. Since at least 2008, Bourbon has been making paintings of people—sometimes alone, sometimes interacting—generally in familiar-seeming domestic or business settings, and the people are partly or completely transmogrified by what seems to be their own psychic electro-field vibrations. Their enlarged and shimmering heads, their protracted arms, even the spaces above their heads and between them is broken up into uneven, rhythmic grids, pixels, and alternating slashes and ruts of color, as though their interior scramble and dialogue is redefining their whole being and the air around them—as though their thoughts and emotions have so destabilized and taken over their mode of feeling and communication that they project a new kind of aggressive static. Rather, in 2009 the vibrations seemed destabilized and aggressive in Bourbon’s work. Now often the psychic language is looking more matter-of-fact and lived in. 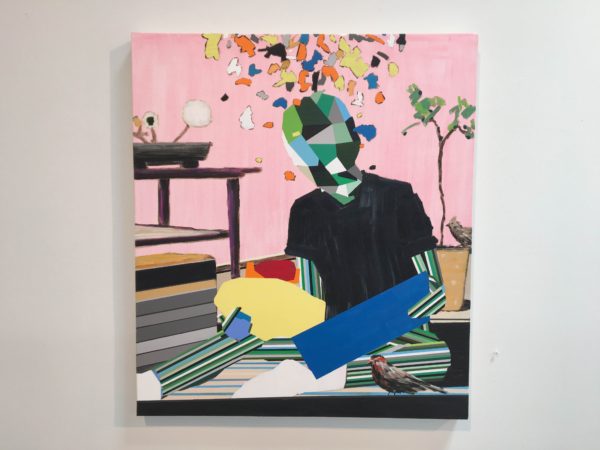 It all just feels very true. It feels like this is what’s actually going on as we deal with ourselves and each other and our daily lives, circa 2016. If there were a special kind of camera or binocular we could view the world through right now, these are the unsettling auras we might see coming off of nearly every person and every interaction. Our own relentless need to be understood and to make sense of things makes the air inside and around us difficult and electric, and it also distorts the things in reach, but it’s also becoming normal. We can’t get out of our own way because we can’t turn our brains down or off, and it’s no coincidence that eight to ten years ago (when Bourbon started on this path) was a time when the invasion of the digital environment seemed to reach a new tipping point—and by now we all just go with it. It’s shared, but also particular to each of us, of course, depending on what we’re thinking about or taking in, and how we’re processing and internalizing (and projecting) it. But we and our world are ‘on’ all the time and this is making us spiky and stuttering and, yes, alive in some new and exciting ways, and yes, also a little robotic and insane. 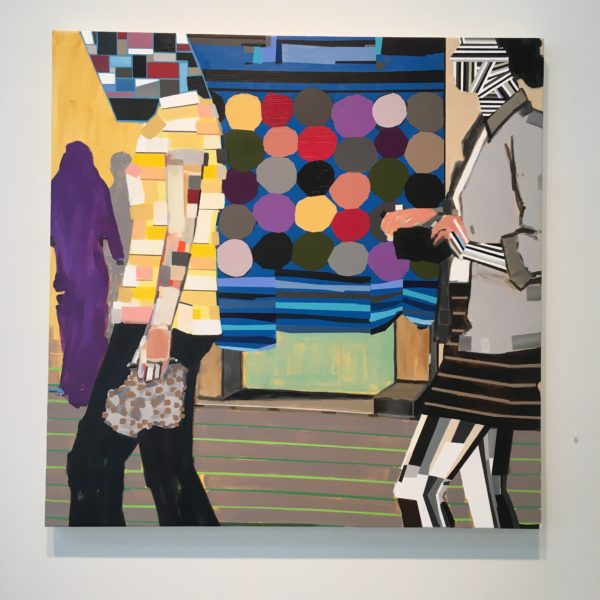 We hide all this interference under our skin but Bourbon exposes it. The language he uses for all this static (I call it static) is a hybrid of what paint has done traditionally, with one color or stroke physically butting up against or overlapping another, and how paint or any other non-digital medium might be used to depict (or intentionally imperfectly interpret) a digitized thing. These paintings are more abstracted than his earlier ones, and the space depicted is more flattened and abrupt. He seems to be using more paint in his passages. I think this all works well, not only because compositionally and conceptually it feels more confident and resolved, but also because psychologically it follows: it’s the logical extension of where he’s already been and where he’s headed, because this is what’s happening to us. We are changing, our brains and lives are nearly unrecognizable from what they were in, say, 2006. And we’re settling in with that fact. 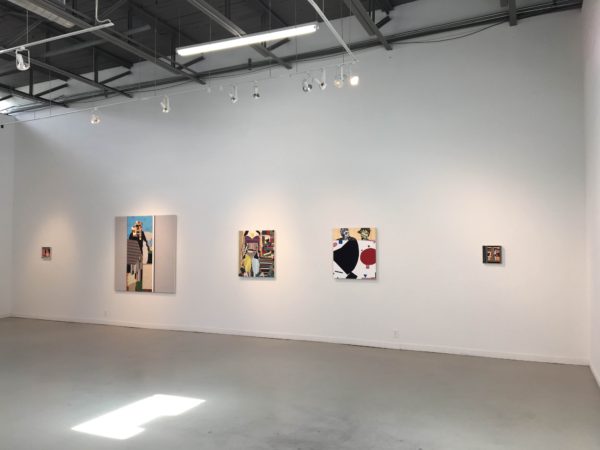 And, of course, being able to see a whole room of these works is a luxury. Each work is its own narrative mise-en-scène, however small or sweeping, and I’m happy to report that as discrete paintings they’re strong. But all together they give you a comprehensive dose of what Bourbon is really up to, and a sense of where he might be headed next. It’s looking like the Bourbon goal post for “unrecognizable” is moving further afield still, and soon, his humans and their settings will be nothing but pure, abstracted static. It’s all very Philip K. Dick, which (for art) can only be good, and in Bourbon’s hands, this will be something to see. It already is.

Misbehaving and Lovesick: A Chat With Erin Stafford