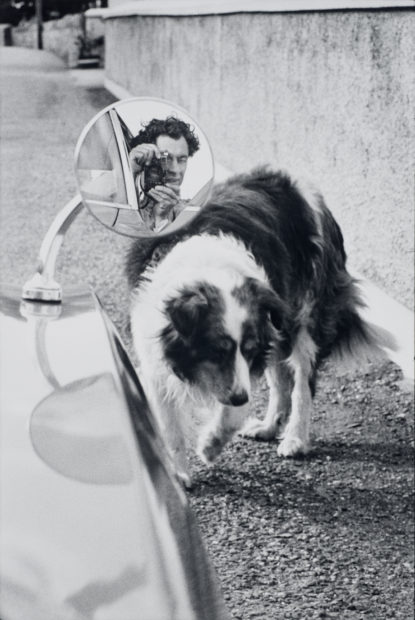 Elliott Erwitt is among the most celebrated photographers of our time, and an exhibition at UT Austin’s Harry Ransom Center reminds us why. Elliott Erwitt: Home Around the World offers an engrossing look at the artist’s trajectory, from his experimental photographs in Los Angeles, to his work as a member of the acclaimed Magnum photographers, to iconic portraits and beyond. Drawn from the Ransom Center’s collection, the exhibition spans 70 years of Erwitt’s career across six continents (he is now 88), and, as curator Jessica S. McDonald notes in the exhibition’s catalogue, the show is as much about Erwitt as his art. It’s a revelation.

Beyond showcasing his technical mastery of photography, the show highlights Erwitt’s deep connection to people and his understanding of the human condition. His shots of children, for example—from Italy to New York to Afghanistan—demonstrate a remarkable ability to capture simultaneously what makes us all different and all very much the same. “You can find pictures anywhere,” he has remarked.” You just have to care about what’s around you and have a concern with humanity and the human comedy.” 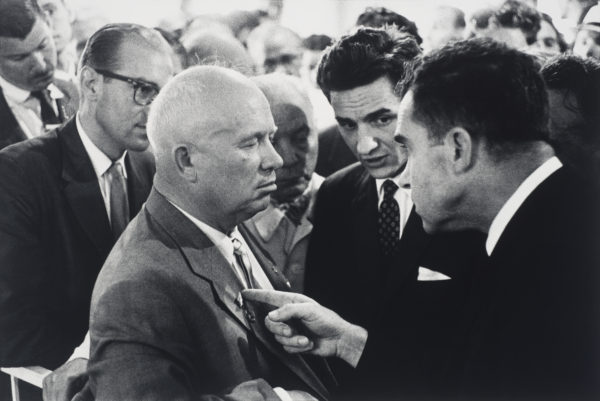 Viewers will instantly recognize many images in the show, as they represent cultural icons or key moments in our nation’s history. 1959’s Moscow/Russia, a photograph of Nixon and Kruschev’s “Kitchen Debates,” famously features the future president poking aggressively at the chest of his Russian contemporary. The image was reproduced by news outlets hundreds of times and was critical in shaping American perception of the Cold War. Shot in Moscow’s Sokolniki Park, it was taken at what fellow photographer Henri Cartier-Bresson described as the “decisive moment,” and is an interplay of light and shadow. Nixon reads as aggressor— a young, capable, and formidable force—in contrast to Kruschev’s paunchy, older, more diminished figure. Compositionally, Erwitt heightens the drama by employing a depth of field that makes the statesmen seem cornered by the men surrounding them. And Nixon, in the foreground, bleeds off the image—his larger-than-life figure unable to be contained within the frame. 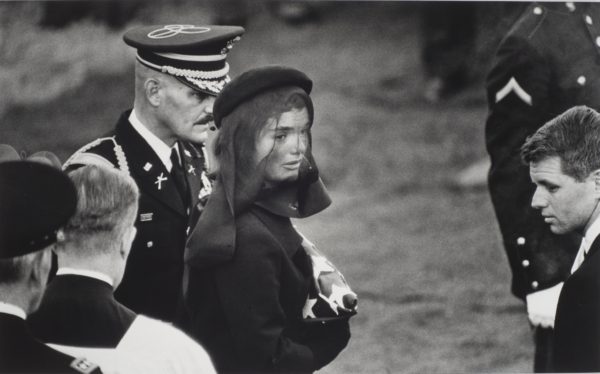 Equally iconic are Erwitt’s photos of the funeral of John F. Kennedy in 1964. His portraits of a grief-stricken Jackie Kennedy, in particular, capture not only the end of Camelot, but also the symbolic end of American innocence. Interestingly, after Kennedy’s assassination, Paris Match commissioned Erwitt to photograph Texas in hopes of providing the French a sense of what it was all about—this strange place, the site of such an atrocity. His shots, from Kilgore, Houston, Georgetown, and elsewhere, paint a less than flattering picture of the Lone Star state, albeit a fascinating one. (Erwitt’s 1972 documentary on the Kilgore College Rangerettes is also on view, and is wildly entertaining.) 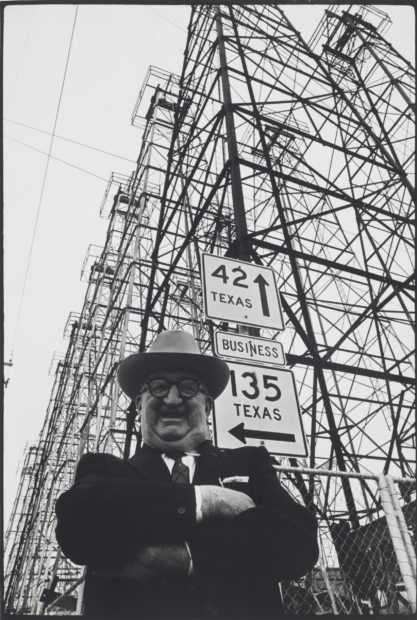 Erwitt’s portraits of authors are among the most compelling works in the show. Commissioned for book jackets by Random House, Alfred A. Knopf, and other publishers, his pictures of William Carlos Williams, Jack Kerouac, Simone de Beauvoir, Thomas Mann and others are absolute gems. Bucking traditional, studio-type headshots in favor of more authentic representations, the writers are placed within atypical compositions and pictured smoking, perched precariously on chairs, or shot from behind. Likewise for Erwitt’s portraits of celebrities. In a culture where the salacious photos of TMZ and People Magazine reign supreme, Erwitt’s images are intensely stylized and thoughtful works of art. His vision pushes past celebrity; his iconic photos of a bath-robed Marilyn Monroe, for example, break down artifice to capture the person behind the Hollywood façade. 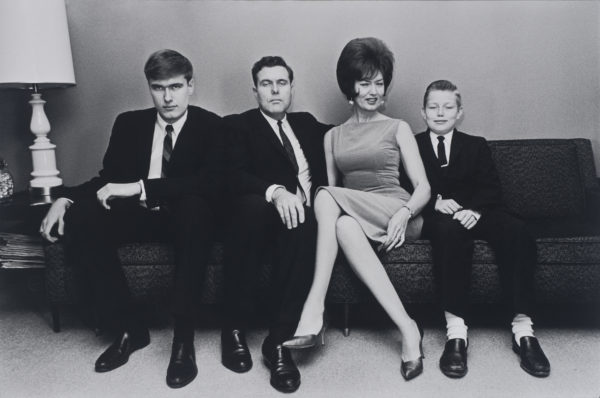 Erwitt’s ads for MONY Life Insurance further reveal his inclination towards authenticity. Taken from 1962-1966, the images feature “regular” men from across the U.S. in their places of business. As payment, Erwitt shot portraits of the participants’ families, and his photo of the Hunter family from Shreveport, Louisiana is a standout. With daddy’s patriarchal stance, mom’s bouffant, and two self-satisfied sons, it’s that era’s encapsulation of the perfect nuclear family. 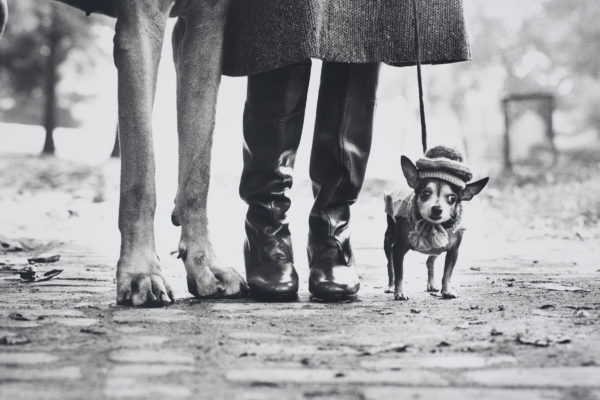 Visitors will no doubt delight in Erwitt’s images of dogs. Canine portraits are among the artist’s most-loved works. Some were shot for ad campaigns, others were commissioned, but all upend traditional representations. As critic A.D. Coleman wrote in a 1974 review for The New York Times: “Erwitt sees dogs—and thus, inferentially, people— as sad and funny creatures, at the mercy of forces beyond their control, subject to the indignities inflicted more inadvertently than deliberately by a power structure which dwarfs them, yet able to survive, nourishing their bodies and spirits, giving and receiving.” 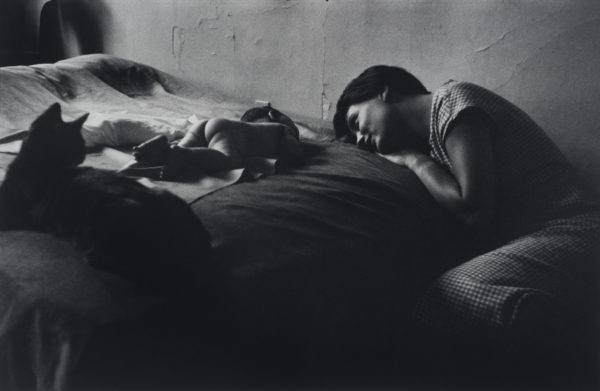 Providing additional insight into Erwitt’s process, the show features contact sheets, books, and a selection of videos highlighting the artist’s work in motion pictures. The contact sheets, in particular, are fascinating. They shed light on Erwitt’s artistic choices and personal sensibility, both in terms of how he framed his subjects, and the ways in which he experimented with photography as a medium. There are images shot from a moving car (an assignment for Holiday), and exercises in lighting, composition, and printing, shot on a variety of cameras. As new processes emerged, Erwitt explored them, but his affinity is primarily for film—particularly black and white. “The problem with digital photography is that it’s too easy,” he has explained. “When things get too easy people get sloppy. And sloppiness is not a good thing in photography—even though photography is fairly simple stuff. When it was non-digital it still took a little bit of effort and thought.”

Erwitt’s contributions cannot be overestimated. He has captured some of the most important people, places, and events of this century and last, and influenced generations of photographers. He understands the power of his medium and how it can reflect and even shape the human experience. “My wish for the future of photography,” he says “is that it might continue to have some relevance to the human condition and might represent work that evokes knowledge and emotions. That photography has content rather than just form. And I hope that there will be enough produce to balance out the visual garbage that one sees in our current life.”

‘Elliott Erwitt: Home Around the World’ is on view at UT Austin’s Harry Ransom Center through January 1, 2017.