Earlier this week, the MacArthur Foundation released their list of 2016 “genius” grant winners. This year’s round of fellows includes biologists, computer scientists, and many professions in-between. Of the twenty-three geniuses, two have ties to Houston:

Joyce J. Scott is a Baltimore-based jewelry maker and sculptor who uses beadwork to comment on social and political injustices. The Museum of Fine Arts, Houston has a number of Scott’s works in their collection. Rainey Knudson recently wrote about a show that included some of these works—read that here. 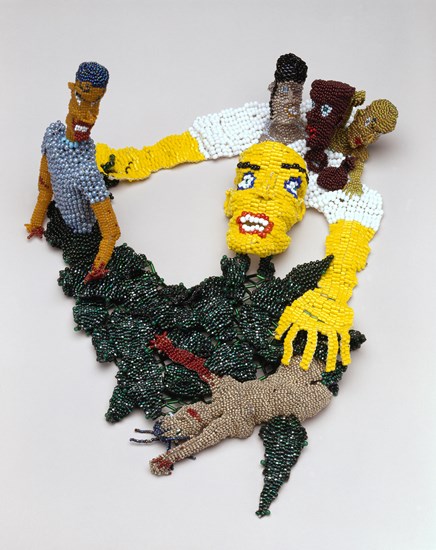 Houston is home to another grantee who is not involved in the arts: Rebecca Richards-Kortum is a bioengineer at Rice University who is developing point-of-care diagnostic technologies for use in low-resource settings and inspiring the next generation of engineers to translate lessons from the classroom into solutions for global health disparities.

The other Fellows involved in visual arts are:

Vincent Fecteau is a San Francisco-based sculptor whose deceptively intricate, abstract pieces provoke thoughtful reflection and bring viewers to the threshold between visual perception and objective knowledge of three-dimensional space.

Kellie Jones is a New York-based art historian and curator whose research and curatorial practice have been instrumental in introducing the work of critically important, but under-recognized, black artists to the canons of modern and contemporary art.

Lauren Redniss is a New York-based artist and writer fusing artwork, written text, and design in a unique approach to visual nonfiction that enriches the ways in which stories can be conveyed, experienced, and understood.

Mary Reid Kelley is an Olivebridge, New York-based video artist whose unique vision spans a variety of media and culminates in arresting, playful, and erudite videos that explore the condition of women throughout history.

Gene Luen Yang is a San Jose-based graphic novelist bringing diverse people and cultures to children’s and young adult literature and confirming comics’ place as an important creative and imaginative force within literature, art, and education.

All MacArthur grantees will receive a no-strings-attached grant of $625,000 to be distributed over five years. Congratulations to all the new geniuses!

A search for Joyce J. Scott on the MFAH’s website reveals more works than the two that are on view in the Statements show, including the provocative “Cuddly Black Dick I.” I wonder if it has ever been exhibited.