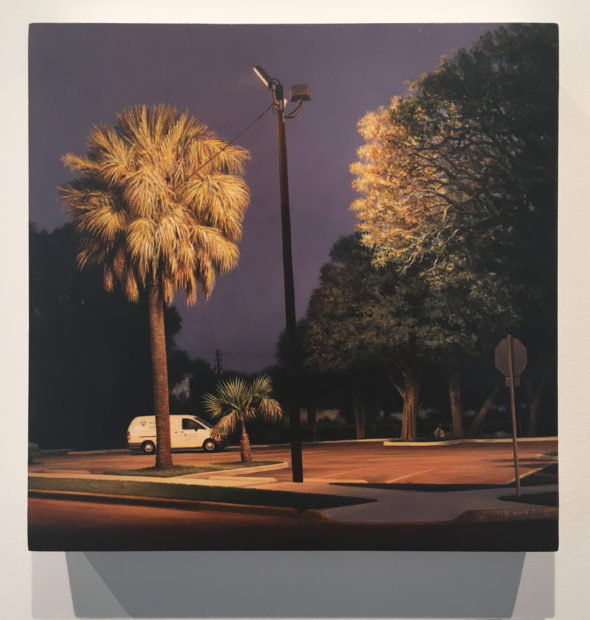 I was surprised to come across a room of Patrick Faulhaber’s tiny, glowing paintings at Barry Whistler’s gallery in Dallas the other day because I had gone in to see new work by Otis Jones and Allison V. Smith. But as I made my way through the space toward the back, I spotted an unmistakable Faulhaber on a facing wall and then turned the corner and—boom—there were several dozen of them.

Dallas artist Patrick Faulhaber died in May at age 70. In 1998, when I first saw his work in a one-man show at the Dallas Museum of Art, he was only 52, and I was new to writing about art. His photorealist paintings of Dallas cityscapes, with their delicate surfaces of microscopic brushwork, were for me at that time a revelation, because I didn’t realize until that moment why an artist would choose to paint in way that from three feet away made an image that seems, to many people, virtually indistinguishable from a photograph.

But back then, looking closely at those paintings in the museum, it struck me that the reason painting will never die (despite cyclical rumors to the contrary) is that the painter is forced to invest so much more of himself—at the very least through time—into the process of rendering of an image, and that a painting (unlike a photograph) is always by default a personalized translation of the original. Nothing in a painting is photographically exact, because physically it can’t be, and that’s where the magic happens. And because this translation takes so much time to make, we assign it tangible and intangible value.

In the end, we realize that one photorealist’s version of a scene would be entirely different from another photorealist’s version of the same scene, because a painting is always a time-stretched, personal interpretation of what he sees. Faulhaber’s street lamp looks like a street lamp, but only in the way he can paint it, made both in his own time and on his own time. 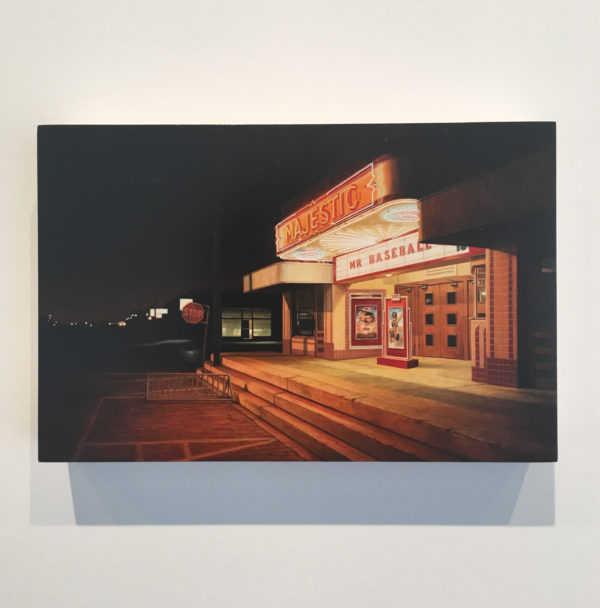 There is a built-in hazard in the act of painting itself. Any painting is a one-of-a-kind, one-shot gamble. The only pillar of success a straight photorealist painting has to stand on is whether the fundamental image is compelling enough—whether it’s a kind of album-cover money shot. The tradition of photorealism has its tropes, and Faulhaber toys with them: His images are cropped photographically and dramatically, they are quotidian Americana (Texicana?), the results are often theatrical, and he veers toward bouncing light and graphic shapes and recognizable nostalgia.

But a photorealistic painting is high risk, because it’s so terribly deliberate and anti-random, and if the painting doesn’t work, the time lost by the artist may be substantial. There’s a danger that by the time the artist is finished with a single painting, he’s actually evolved into a different person. The making of that painting and the intimacy he had with that image marks a whole discrete cycle of his life.

All these days and weeks and even months spent on a work carries value, in human terms, that has to do with our modern idea that the best artwork 1) takes a lot of time to make, and 2) is therefore a vessel that’s captured the essence of artist himself, and maybe even the artistic impulse itself. It’s a very sentimental sensibility we bestow on painting. And it’s why our most expensive paintings are still much, much more expensive than our most expensive photographs. 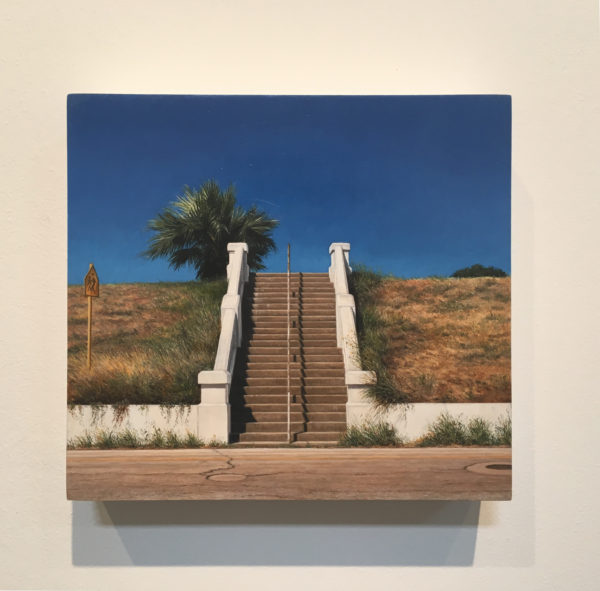 Faulhaber’s chosen subjects are, at first glance, anti-glamorous—Dallas parking lots, liquor stores, bars, motel pools— but his aesthetic is a natural extension of Hopper’s knowing stagecraft, and he also shares DNA with the cool-handed Robert Bechtle. There’s no doubt Faulhaber’s paintings fraternize with the photography of Eggleston and Shore. And like these artists, Faulhaber’s gift is allowing your encounter with his work to spookily mine your own emotional trenches and see what surfaces. This might depend on your tolerance for the potential filmic kitschiness of photorealism (another part of the risk), but even the most sophisticated viewer is susceptible to the Chandler-esque seduction one finds in a young city looking and feeling prematurely worn.

In his paintings, Faulhaber created little narrative micro-shrines to society’s weird, fleeting compulsions, as in: We need this liquor store now because it scratches an itch—and then this liquor store or parking lot gets built in the way only optimistic, reckless cities can build things, i.e, for the moment, and to hell with posterity. So Faulhaber bestows on these ignoble tokens of low humanity—or teases out of them—a kind of quiet charisma. 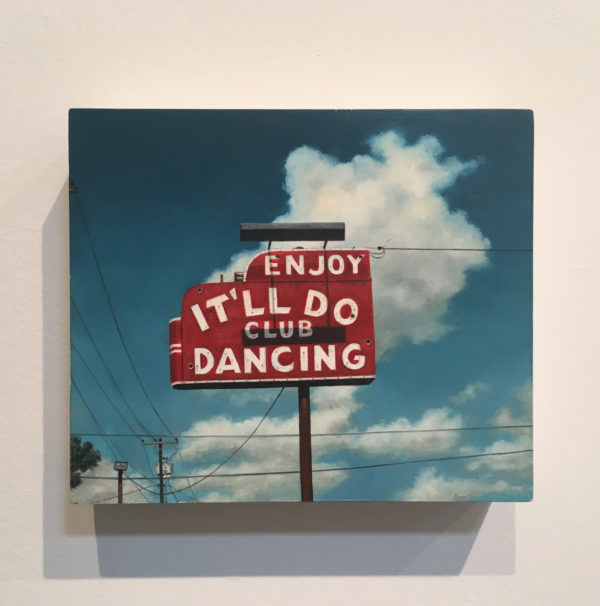 And in the process he gives some pedestrian and overlooked moments of our own existence some flash of light and meaning. You’re from Dallas: Have you been to that bar? Parked in that lot? Danced at that dance hall? If not that one, then another one almost just like it. And the painting, with its hyper-real familiarity, becomes a thing that can cause a jolt of pain or recognition, and then a more dense longing, which you thought only lived in your own locked memory. It’s not that photographs can’t do this. It’s just that when you get to take this trip with a painter, you’re riding shotgun, and if you’re lucky, an artist like Faulhaber is at the wheel.

A selection of Patrick Faulhaber’s paintings, on loan from various collections, are up through Saturday, Sept. 24 at Barry Whistler Gallery.

I liked reading that.

Thanks for this enjoyable and affirmative read during a break from hours of close focused, 2/0 brush work alone in my studio conjuring and coaxing imagery from memory and fantasy, more than occasionally wondering “What the #! am I doing this for?”

Christina, you nailed it as you so often do.!!!

We recently installed three Faulhabers here at the DMA, in the Center for Creative Connections gallery. I’l have to visit Barry Whistler soon!

As suggested in many of his images, Patrick Faulhaber was a wonderfully humane person — also a kind and patient friend. As an artist he celebrated things often ignored or taken for granted. Thank you for commenting on the value of his work!

As always, Christina lends a valuable read into interpreting the propriety and relevance that Patrick’s works comprehend, and the challenges of approaching such. However here is no mention in the caption titles of the size of the paintings beneath the images nor in the article other than a suggested comparison between painting and the photograph- which could be any size . i find this omission curious as i would imagine this to be a critical element attributed to Patricks style and approach as well as concept. My conversations with Patrick confirm this was an essential component of the works. I believe that some clarification of this would be in order and helpful to an otherwise enlightening portrayal and appropriate recognition by Ms. Reese. Also why is this exhibition not listed on Barry Whistlers Website?

Christina – thank you so much for your article about Patrick and his exhibition at Barry Whistler Gallery – what an amazing and wonderful surprise! A little background….Barry (along with many other gallerists) offered to host an exhibition of Patrick’s work out of friendship and respect. As Patrick liked to say, his paintings were “a little snip-it of life”, so is the exhibition, ”a little snip-it” in time. I am so grateful to Barry and his staff; Allison and Otis for sharing the space with Patrick; for the many collectors who graciously lent their work to the exhibition; and for my family and friends who helped in so many ways to prepare for the exhibition and to keep me going! xxoo

I met him years ago at the old Conduit Gallery location on Main St. He seemed to be a great guy and was certainly a terrific painter. He lived near me in East Dallas, and most of the scenes were from only a few miles away. He could elevate the everyday, somewhat funky scene.

Very good article about an interesting artist. Thank you for this insightful look at Patrick’s work.