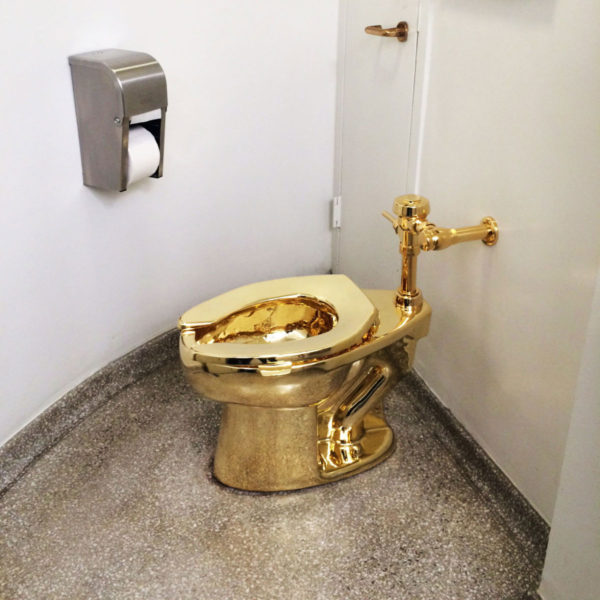 The very popular Maurizio Cattelan retired from art making after his big, well-received Guggenheim retrospective in 2011-12. But five years later, including some production delays, he’s debuting a new work at the Guggenheim later this week. It’s a solid gold, fully functioning toilet installed in that weird little one-seat bathroom halfway up the museum’s spiral ramp. (You know that one? You totally do.)

This thing is solid eighteen karat gold, it’s titled America, and the public can… use it. The seat is heavy, and you can flush it and everything. The New Yorker’s Calvin Tomkins has already seen it and writes: “Nothing Cattelan has done pre-retirement is more drop-dead beautiful… . And, for viewers who crave a one-to-one relationship with art, this piece cannot be topped.”

The Guggenheim’s press release is good, too: “Its participatory nature, in which viewers are invited to make use of the fixture individually and privately, allows for an experience of unprecedented intimacy with a work of art.” To bring a little poetry to the thing it also states: “Cattelan’s toilet offers a wink to the excesses of the art market but also evokes the American dream of opportunity for all—its utility ultimately reminding us of the inescapable physical realities of our shared humanity.” You know, that’s correct.

(And here we make reference to Duchamp and all that.) The toilet will be there and ready for your pitstop action for the foreseeable future. And right now, the price of airline tickets to from Texas to New York are relatively cheap.

If We Didn’t Know the Art World Was...

BOTH at the Tate. Well done, England.

Even a high-rolling artist like Sherrie Levine couldn’t afford the solid gold treatment in 1991 when she made her merely bronze replica edition of Duchamp’s Fountain. I guess Cattelan’s mouthful in this appropriation daisy chain is actually making the fixture functional and more egalitarian, since a toilet is presumably less gender-specific than a urinal. Whatever their investment in the gold throne, the Guggenheim will profit mightily from the viral press that will micturate from the installation of this fixture. Let the puns begin.