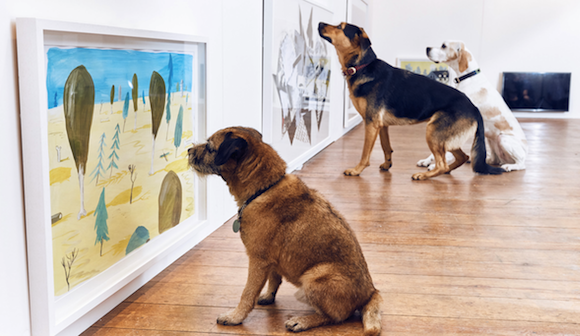 First there was Laurie Anderson’s Music for Dogs concert, performed for dogs and owners at the Syndey Opera House in 2010 and early this year in Times Square. This past weekend, artist and inventor Dominic Wilcox curated a contemporary art exhibition for dogs, reports Dezeen Magazine.

Three of Wilcox’s own works were in the show, as well as paintings and interactive experiences commissioned from five other British artists. Entitled Play More, the exhibition includes paintings hung at doggie eye level, in colors that appeal to dogs (apparently gray, blue, and yellow). A favorite at the show was “Cruising Canines,” an open car window simulator where a giant fan wafts a dog’s favorite scents, like raw meat and old shoes. Wilcox stated that he is “deadly serious about being playful.”

Don’t get excited, though, if you’re planning on a trip to London. The show was only open for two days. Here is a short video:

Lest you forget Paula (well, it was 14 years ago!), Houston had it’s own exhibition of art created “by, for and with” our four-legged friends when Darryl Lauster curated “Petcentric” for Lawndale way back in 2002. Although the show wasn’t exclusively devoted to fur babies of the canine variety, there were several works which were, and remain, quite memorable, such as Kelly Pike’s smoked pig ear shoes. But it was the photo of the dogs looking at the art that prompted my memory of Devin Borden’s photos (also hung at dog-eye level) wherein he cunningly added “scent specific” reinforcement to each of his images to make them more appealing to his target audience. Ah, the good old days…