Frank Stella: The Promises and Problems of Abstraction 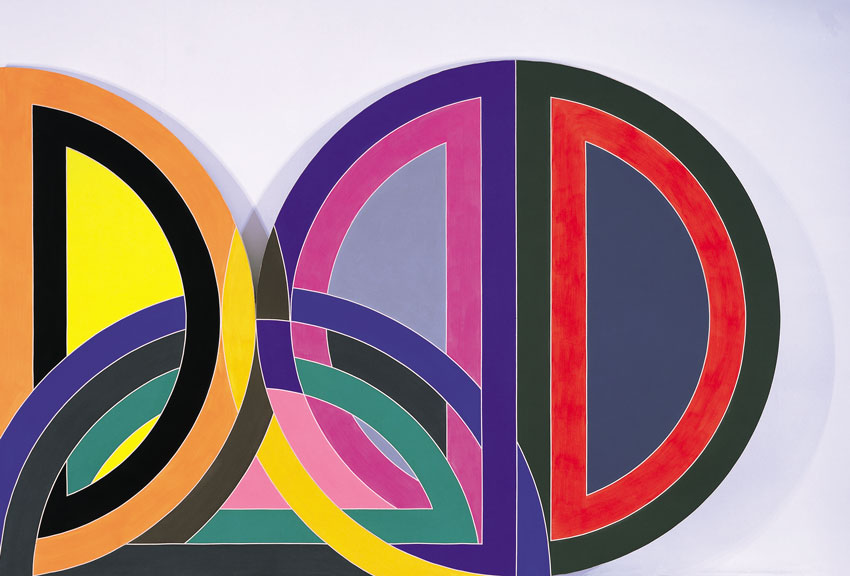 What’s made Frank Stella a household name many times over isn’t necessarily what makes him important. He’s been swept up in a number of styles and modes that couldn’t exhaust his inquiry. His ambition and canny sense of place within the canon have produced an oeuvre that stays focused philosophically while being stylistically promiscuous. If you haven’t yet, you should catch his career-spanning retrospective at the Modern in Fort Worth  before it comes down in mid-September. The exhibition is organized roughly in chronological order and does a nice job of linking up very different bodies of work, and it threads us through a 50-plus-year evolution of Stella’s physical and intellectual play.

Stella’s an important artist because he’s been equally invested in understanding the history of Western painting and in finding relevant ways to innovate that history in the present. Or as he puts it: “There are two problems in painting. One is to find out what painting is and the other is to find out how to make a painting.” 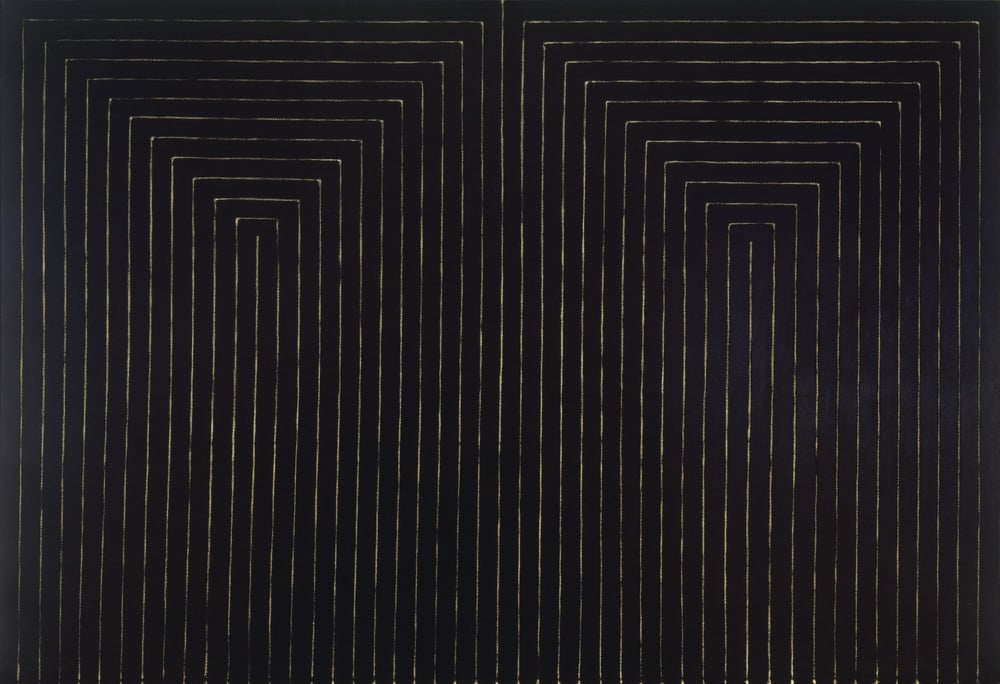 The Marriage of Reason and Squalor

Stella came in on the heels of Abstract Expressionism in New York, where artists were breathing new life into modern painting by unifying shape with gesture. He and Rauschenberg and some other young whippersnappers were at the time impressed by Pollock and De Kooning, but were also poking around for chinks in their armor. They needed to find a way to push the ball forward. For Stella, it was his black stripe paintings that first struck a sweet note. In works like The Marriage of Reason and Squalor and Die Fahne Hoch!, both from 1959, he established an elegant unity of action and perception, mark and material, that also eliminated the melodrama of expression. 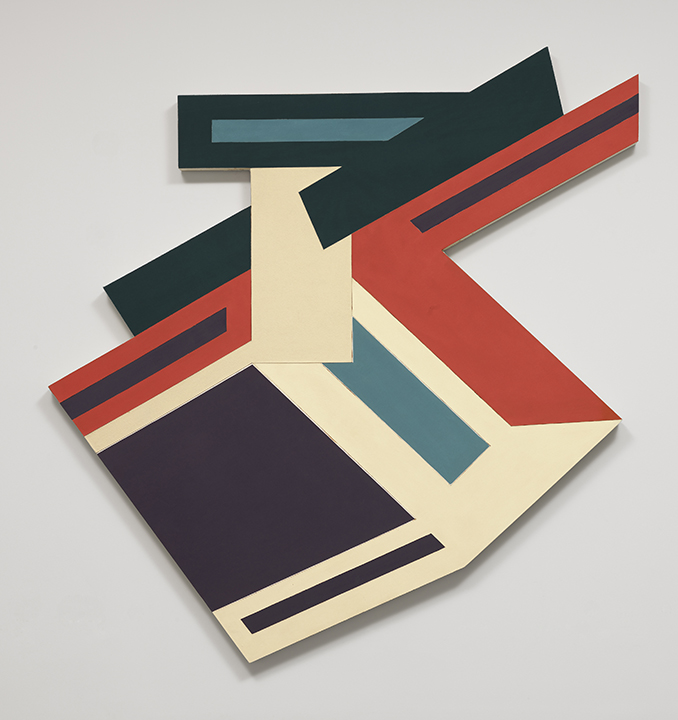 His dictum “What you see is what you see” rang out through minimalism, and was taken to literalist extremes by Donald Judd. It only partly applies to Stella’s own project. Where Judd wanted to abolish illusion of any kind from his objects, Stella actually only wanted to sever the mimetic from pictorial space and rebuild its “illusions” on the bedrock facts of shape and surface. He basically updated what Mondrian was doing in his Pier and Ocean series, or what Diebenkorn would enumerate in his Ocean Park works (though Stella’s was minus the California light). Where he departs is in reiterating the shape of the substrate as the composition. Mondrian created an equal tension of marks around the canvas; Stella fused those marks to the frame, lifting the abstraction out into our space.

The modernist project included, among other things, a hope that in unraveling pictures with all of their socially coded ways of attaching meaning to visuals, we could somehow construct newer, truer pictures. Pictures that could speak from outside conventional subject positions; that could speak to everyone equally; that could pry the lid off illusions of all kinds, not only those of representational imagery, but also of semiotics. Abstraction seemed to be the prescription. Stella’s early development crests with this high-modernism and then eases into funkier terrain. 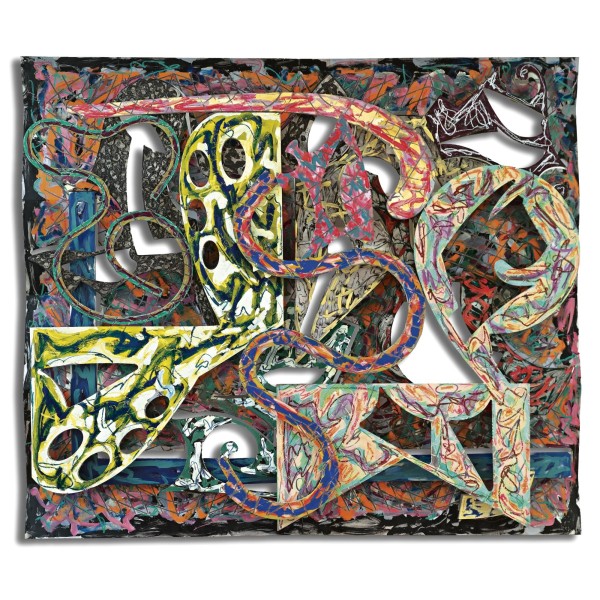 Through the late ’70s and ’80s the works get busier, gaudier, layered up, fractured and bent.  His hard-edged ideas about painting start trying on tacky clothes. He has the kind of feel for what he’s doing that’s allowed him to flirt with appearing inconsistent, or downright silly. Talladega from 1980 is a complete overload of swiss-cheese and chain-link chaos. It’s more like a stage set for a musical about painting than it is a painting. This remove, present in much of his work, cools down the whacked-out dynamism of the compositions. There’s a kind of dialectic of space in each element, which are leveraged against each other to balance the readings of real and illusory. Successful or not, these works hover between worlds. 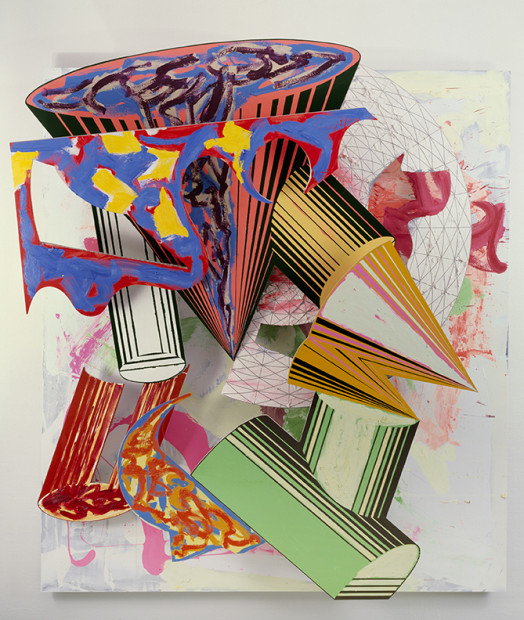 Like many of his peers, Stella has continually incorporated materials and production techniques from industry in his work. The difference in what artists do with these materials (and with what industry) reveals their M.O. Stella doesn’t trade wood in for metal for the sake of efficiency or to create a sexier illusion; he’s looking for a new set of spatial parameters to play off of. This thorough retrospective of course traces where he switches from shaped canvases to plywood and cardboard reliefs, and then to honeycombed aluminum, plastics, and so on. A compulsion of some kind has him pick up a sheet of something more rigid, more lightweight, more flexible, or brittle, which leads to a whole new world of possibilities and limitations. We can easily follow the way he thinks through the materials, drinks up their properties and riffs on them. 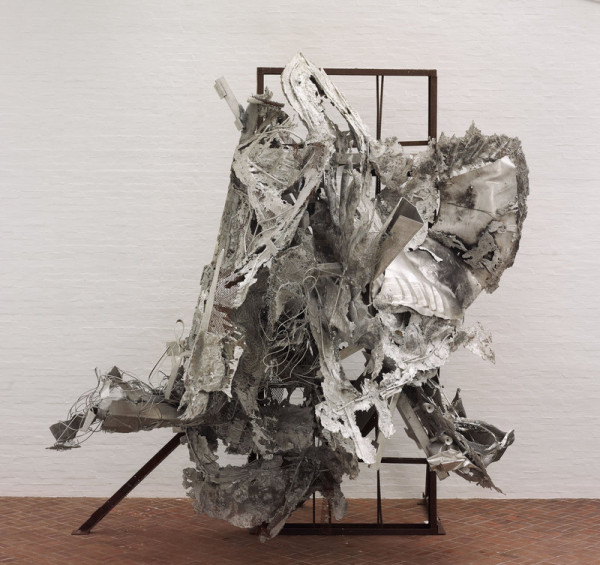 Raft of the Medusa (Part I)

Those critical of his later work find it lacking the conceptual wit of the early pieces. They’re eyed as too spectacular to be serious, too friendly to bank lobbies or blockbuster museum shows aimed at less-informed audiences with shorter attention spans. And this may be true. But to Stella they are apples and oranges.

In the mid-‘80s Stella published a book, Working Space, based on a series of his lectures at Harvard, in which he takes stock of contemporary abstraction in relation to earlier moments of crisis in the history of Western Painting. After coming in at the most recent so-called “end of painting,” Stella looks back to Kandinsky, Picasso, Cezanne, Caravaggio and Titian, searching for a roadmap for the discipline to reinvent itself. Working Space contains an interesting accounting of pictorial space through renaissance painting, Cubism and early northern abstraction (Mondrian, Malevich and Kandinsky). Like the full range of his work, there are his characteristic insights, thoughtful arguments, and a good deal of tedium.

Ultimately Stella leaves us with the same promises and problems of the modernist project, and it’s a project largely diffused or absorbed into other agendas. One thing he may not have foreseen is how a new kind of flatness and connectivity would reshape the world and our perception of history, which no longer feels linear but simultaneous. It seems that the reality of physical space is a relic of the past. Likewise, objects that speak the language of space are at best just background scenery or curious furniture for the museum of the real. The job of the next Stella will be to decode and embrace our current limitations of cultural expression in a way that generates a series of obvious new truths.

Through Sept. 18 at the Modern Art Museum of Fort Worth.

Great review, but can’t hope to match the show–which is just stunningly beautiful, inspirational, and a wonderful installation.
I’m planning to go up to see it again; it’s too much to take in at one trip. Also, if you go, don’t miss the museum’s contemporary
collections upstairs–lots of paintings that are in books.