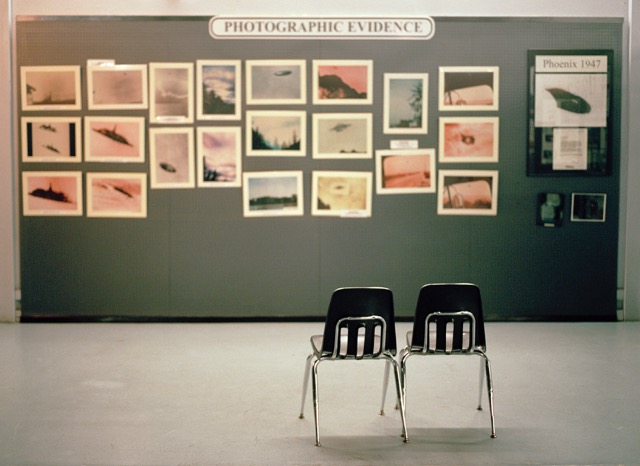 Rebecca Marino: The Best Available Evidence at Art Palace in Houston considers questions of proof and truth. In the case of this show, the evidence or proof relates to UFO sightings. Marino’s gallery statement claims she considers UFOs a “light-hearted way” to delve into tougher questions about truth— truth in terms of belief and photography. She has the tools: photographs, found objects, audio recordings, recreations and simulations (through both her photographic work and found objects) to explore those aspects. 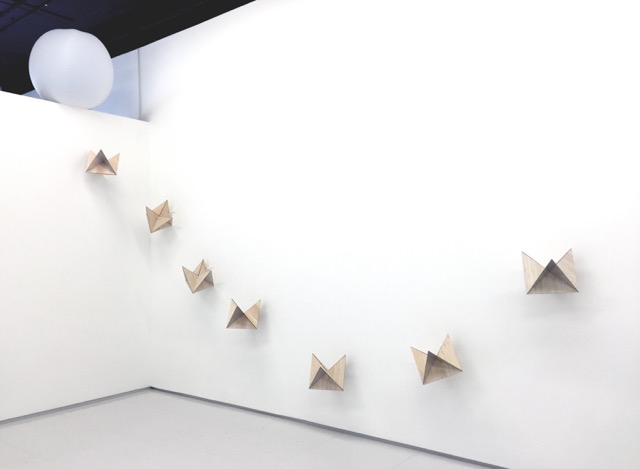 The Roswell UFO Incident in 1947 remains for some believers the best available evidence of contact. Marino’s installation of Project Mogul uses a key component of the Roswell accounts—a weather balloon—as the evidence that was produced (instead of a UFO) by the U.S. government to explain the mystery. Its placement sandwiched between the gallery’s walls and ceiling suggests a kind of pressure to the balloon, perhaps emblematic of the status of belief and/or truth within the exhibition. 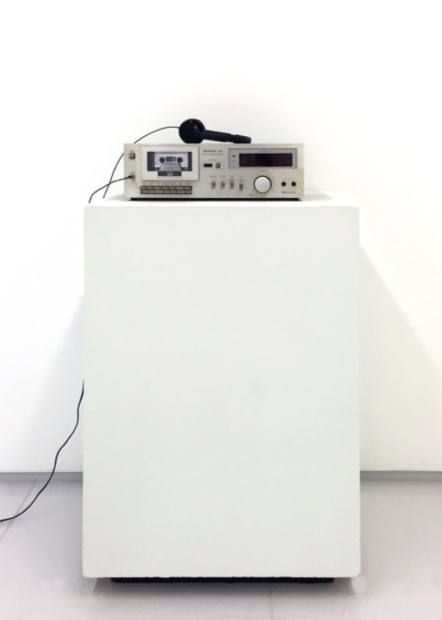 Marino includes an open-edition zine filled with Xerox quality newspaper headlines announcing flying-saucer sightings. This edition—along with the inexpensive available audiocassettes (Unclassified – UFO Eye-witness Testimonies)—adds an additional layer of evidentiary materiality to the exhibition. The zine encourages the association with stereotypes of the fringe conspiracy theorist, the type of eyewitness or believer who must (re)produce his or her own evidence. This ‘evidence’ is so important, so pressing, that it’s distributed widely and freely (and cheaply). As expected, the images reproduced in the zine are often muddy and hard to make out—another way ‘proof’ gives way to fallacy. The audiocassette recording lasts about thirty minutes, and on it different eyewitnesses (Marino paid for and produced some of these accounts, though some are found) discuss their UFO sightings. These accounts include statements that affirm no money was accepted in the making of such testimonies, as if the lack of a financial exchange is further proof of truth. 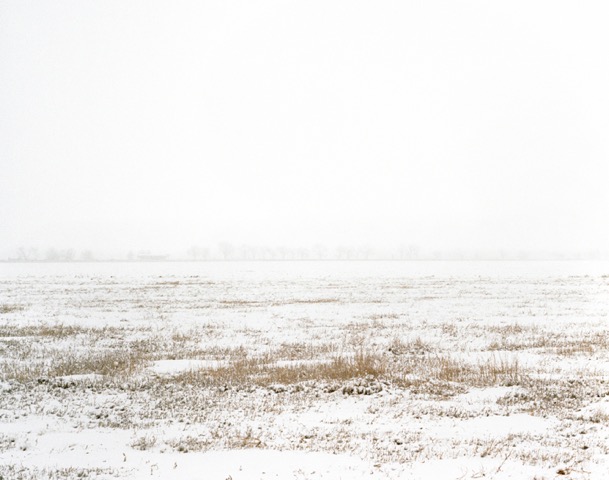 Marino’s own photographs, along with the audio recordings, are the highlights of the show. Her Photographic Evidence is a photograph of photographic evidence at the UFO Museum (The International UFO Museum and Research Center) in Roswell, New Mexico. This print introduces the viewer to the most germane concepts in the show: the ideas and problems around seeking the truth, finding belief, and the continual questioning of such within a photograph, and even perhaps if contemporary photography can or should even sustain such debate anymore. Another photograph from Roswell (Roswell, NM) takes the viewer to a snowy field. The horizon line, barely visible, acts as an unreliable touchstone as the landscape recedes into the distance and trees seem to dissolve, as if we are viewing another planet. In the foreground grass pokes up through the snow to remind us of our earthly footing. 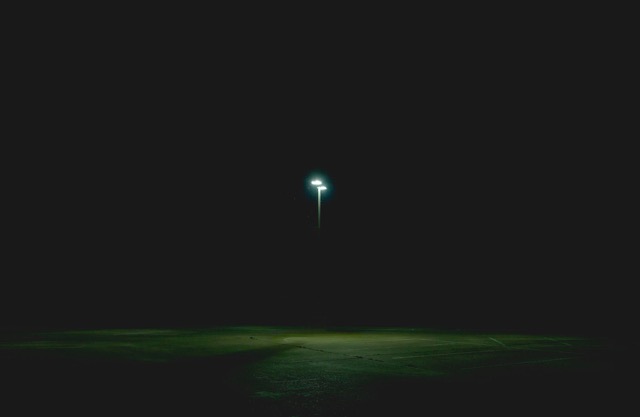 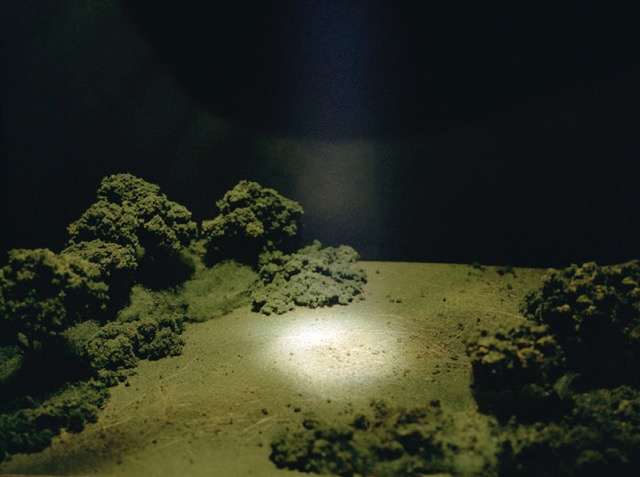 Another photograph, Nocturnal Light (CE – I), turns a football field into an uncanny, otherworldly phenomenon. The ordinariness of a familiar field becomes disturbing; the two lights that illuminate the foreground only prove the rest is total darkness, and likely best avoided. Nocturnal Light (CE – III) is similar; it shows us possibility in its eerie effects of light. These works—along with Daylight Disc (CE – I)—present the real as a simulacrum. In Daylight Disc (CE – I) and Nocturnal Light (CE – III) Marino stages the landscape through her creation of a diorama; she (re)produces the natural under her structured and manufactured order. Although her football field is not a diorama, it, too, is a manufactured turf. The relationship between these night photographs, this questioning of the “real,” is supported in their placement side by side in the gallery. In Daylight Disc (CE – I), she produces the UFO, a blur on the right, and so now she’s also the creator of the kinds of photographs that populate our introductory image, Photographic Evidence. Together the photographs foster doubt of which (or any) photograph is “real.” 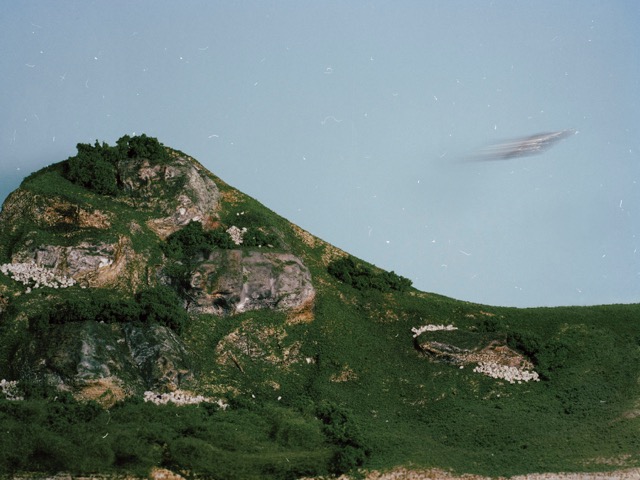 A nostalgia pervades the exhibition—supported by Marino’s use of something so now bizarrely out of time as an audiocassette—and even through her investigation of alien or UFO sightings. The real heyday for this ended more than 20 years ago, but aliens remain a favorite pop-culture reference point, especially and currently through various reboots of mainstream science fiction like The X Files. Right now, there seems to be a renewed desire to re-encounter worlds beyond this one, and this may be rooted in nostalgia for our earlier love affair with the subject.

The X Files and its tagline “I want to believe” seem pertinent here. Marino both offers and takes away her evidence. Vistors can listen to the eyewitness testimonies or put on white gloves to touch film pierced by the word “PROOF.” We become the temporary believer, or are for that moment at least asked to partially suspend disbelief. As I negotiated the materials of the show, my own questioning crept in. In the spaces between each of the audio recording’s accounts, there are gaps of space, of white noise, which create an odd aural place where we struggle to fill in those spaces with our own impressions. I want to believe…what? As Marino’s work shows, I’m not sure there’s anything left.

Through Aug. 13 at Art Palace, Houston.