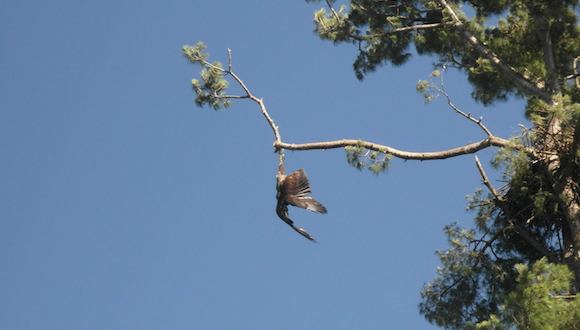 This may be the most absurd Fourth of July article we’ve seen as of yet. Some highlights:

Jason Galvin used a .22-caliber rifle to fire 150 shots at the rope and branches surrounding the feathered creature — America’s national bird — after spotting it dangling upside down close to his family’s cabin near Rush City, Minnesota, on Thursday.

The bird, which has since been named Freedom, was very much alive.

“It was a good weekend for it to happen,” Galvin, who served two tours in Afghanistan, told KARE 11 News. “Fourth of July, you know, that’s our bird. I can’t let it sit there.”

“I told Jason he had to shoot it free!” she said. “He was nervous as he didn’t want to get in trouble for shooting at an eagle but I know with his sharp shooter skills that if anyone would save this eagle it was him!”