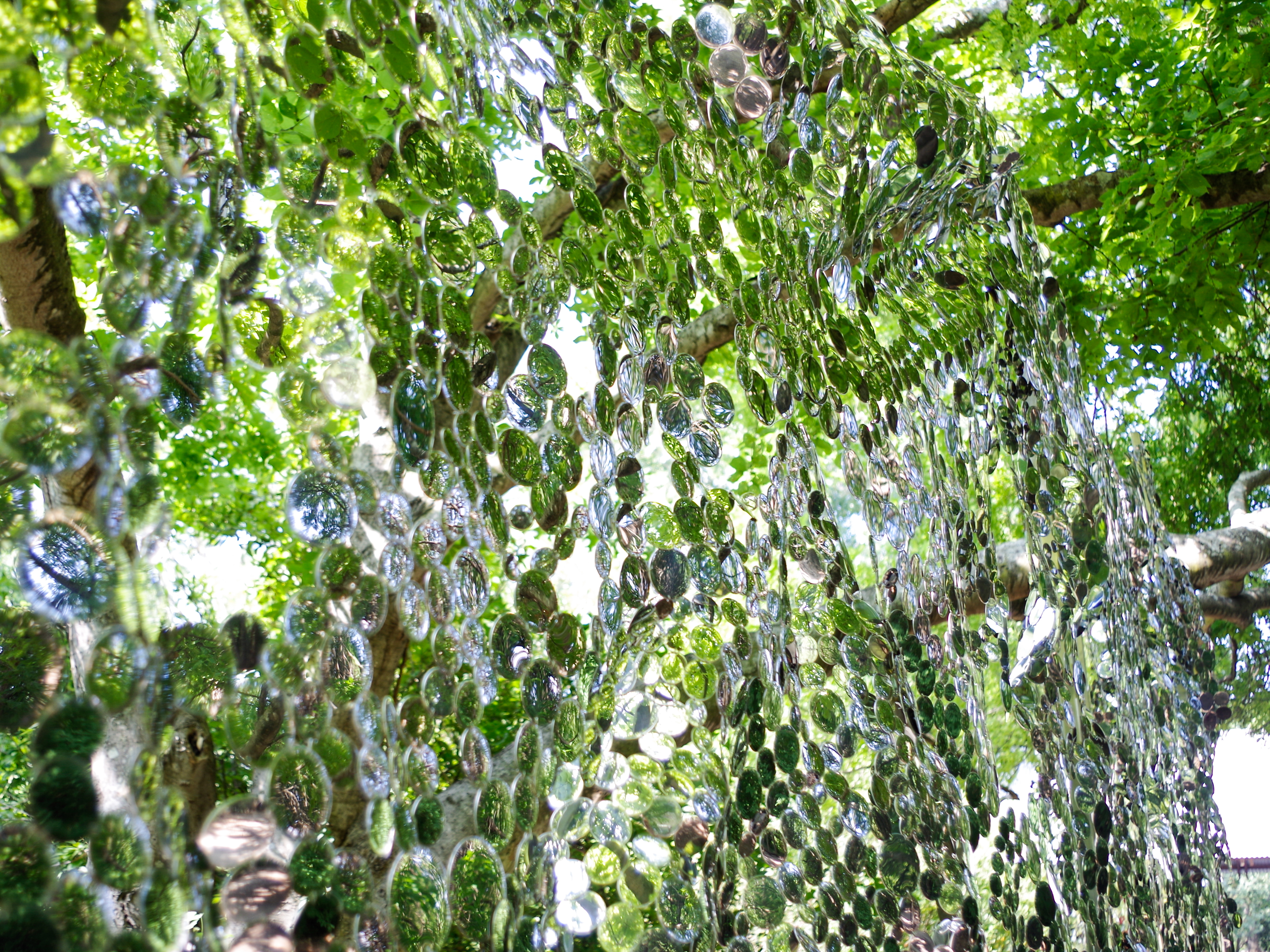 Scattering Screen, a site-specific work by Brooklyn-based artist Alyson Shotz, is the latest iteration of the collaboration between Blue Star Contemporary and the San Antonio Botanical Garden. Out in the garden, Scattering Screen is an expansive, undulating screen of small stainless steel rounds woven together in irregular patterns. The different-sized circles create a reflective form under a canopy of trees along one of the garden paths. Almost hidden, the screen slips in and out of view and could very well be missed by the most intrepid urban-garden adventurer.

The form comes into focus when it becomes apparent that the small circles are not green leaves and spots of light shining through, but instead reflections of the same combined with the voids of the screen’s net-like structure. It creates a sort of fabric and directly addresses a way to think about metal sculpture where light and permeability triumph over scale and impenetrability. Given some time and attention, the reflected surface images change with the light and shadows, passing figures, and the swaying of the trees. It’s a mesmerizingly subtle effect hiding in plain sight.

I met with Shotz to discuss her work.

Chad Dawkins: The first things that come to mind for me in seeing this work are the words ‘delicacy’ and ‘disappearance.’ Does this site in the botanical garden factor into your work and how it relates to the environment?

Alyson Shotz: Yes, I’ve been trying to think about public outdoor metal sculpture in a different way. Traditionally, large-scale metal sculpture is a heavy, welded type of thing, but I’ve been wondering if it can be more like a fabric, more permeable, but still be strong? And this piece is quite strong; all of the little pieces woven together make a very strong whole.

Scattering Screen is actually part of a new series that started with a piece I made for a show that just opened at the Philadelphia Academy of Fine Art. For that exhibition I made a sculpture called Plane Weave, which is composed of thousands of small aluminum octagons connected by steel rings. This series started by trying to rethink metal sculpture: asking what else can it be? Instead of solid welded objects could the metal drape or be affected by gravity? Could it be permeable or translucent?

Mirror Fence [2003], at Storm King Art Center is another iteration of this approach—it’s not simply an object dropped in the landscape; it becomes part of the landscape. Part of my investigation into outdoor sculpture is an inherent critique of the traditionally male ways of dealing with the outdoors through art. Scattering Screen takes what unfortunately might be called “feminine” ways of working (a sewing or quilting type of approach to metal) and doing something large-scale and durable. 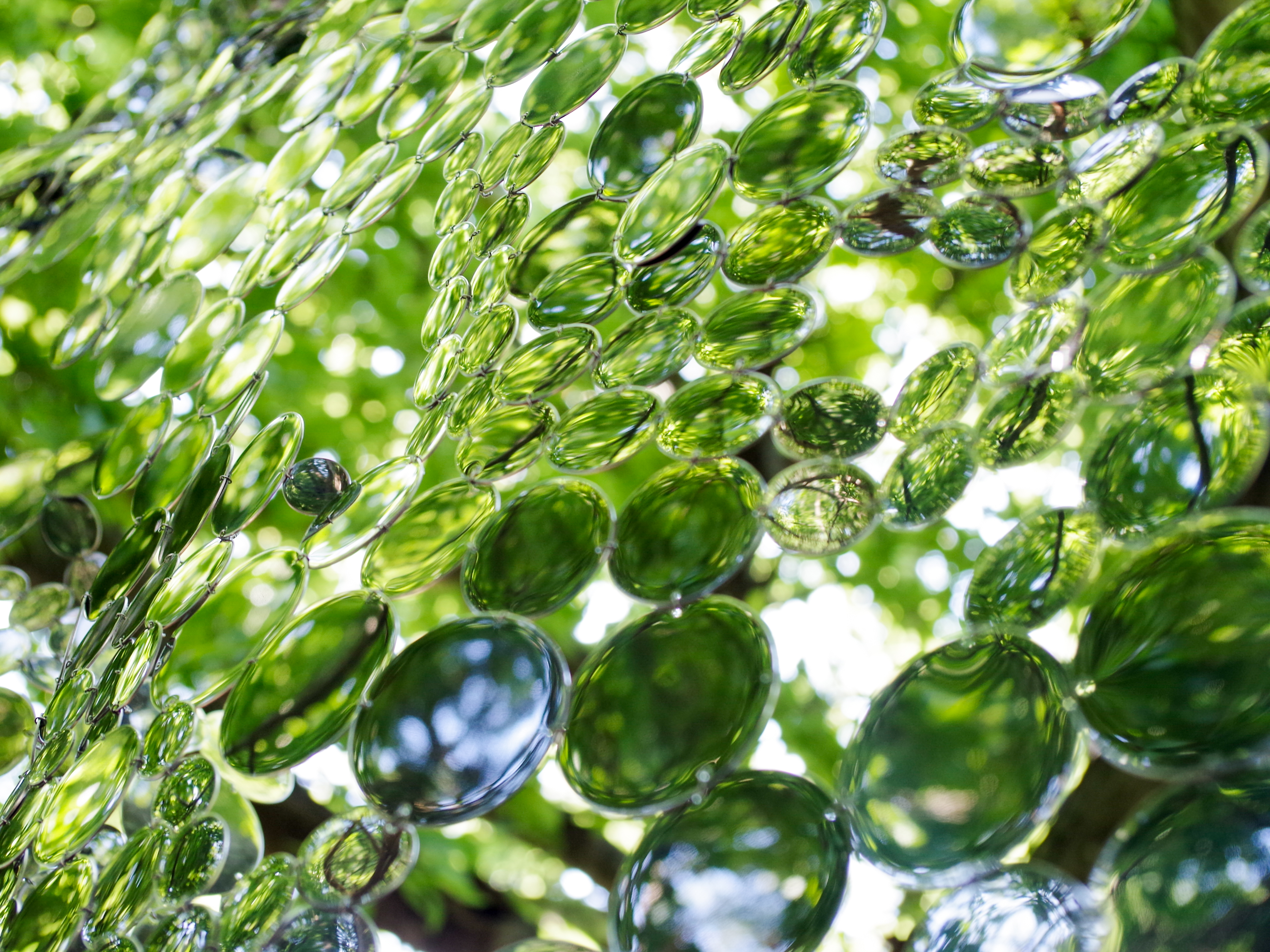 CD: Yes, It is interesting to think about public sculpture—large-scale sculpture—through the mode of its fabrication. You’ve used a lot of beading, weaving, sewing together. How does that dynamic come into play when thinking about your work? How does a gendered mode of working play into what you are making?

AS: It comes into play quite a bit. Beading, sewing etc., are seen as women’s work—this is nothing new—and hence viewed as the lesser crafts. So this paradoxically makes me want to use these methods and make them work in a new way.

When I was an art student in the ’80s, the only sculptors we learned about were men. People like Mark di Suvero, Richard Serra, Donald Judd. Probably because of this I didn’t even consider going into sculpture. When I began making sculpture, I wanted to add to and change that conversation.

CD: It is a strange dynamic that somehow we can still think of materials, or even how they are assembled, as having gender associated with it.

AS: Yeah. While researching the Bauhaus, I read that in the early years of the school the textile department was run by men and didn’t allow women. At some point the men were needed to take over another department and textiles became the women’s domain, and in fact women enrolled at the Bauhaus were automatically put there, even if they didn’t choose it. So when I work with materials that are traditionally considered female I may be putting myself in dangerous territory.

However, this is what I am most passionate about—trying to make large-scale sculpture differently. How can it be large but delicate; how to express volume without mass; how to express invisibility and presence. Also, for many years I’ve tried to incorporate time and change in the work. Even while we’ve been standing here, the sculpture is changing with the changing light. It’s breaking its surroundings into parts. There are subtle changes if you wait for them. I think of these circles as seeing air itself—seeing the air surrounding the piece.

CD: Has this specific site or situation influenced the work you made? I’m thinking about the audience—a general public in a park, versus those visiting a museum or sculpture park.

AS: The audience has not influenced this work but of course the site has a great influence. I don’t try to gear my work to a specific audience, but instead try to make the best work for the particular site. However, since we’re in a botanical garden, and people are here to focus on nature, that’s fantastic. My work in the garden is meant to slow down the viewer and allow them to really look instead of rushing through to see the next thing. If this sculpture is given some time, the viewer will see subtle changes happening through it—even over a span of ten minutes. It’s a mirror image of the changes seen in nature all the time, but we are generally too busy to notice them.

‘Scattering Screen’ is, in collaboration with Blue Star Contemporary, on view at the San Antonio Botanical Garden through Spring 2017. Images by Chad Dawkins.

“Video Control Reaction” and a New Way to...