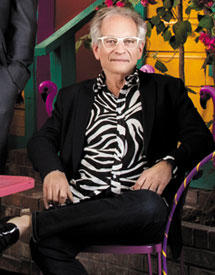 Mickey Rosmarin, philanthropist and founder of Tootsies Houston, died Friday of a heart attack in his Houston home. He was 63 years old.

For more than 40 years, he was a fixture on Houston’s fashion scene, reports the Houston Chronicle. He first sold T-shirts and then opened his first store, the hippie-influenced Honest Threads, on lower Westheimer in 1973, where he sold recycled jeans, vintage Hawaiian shirts, and offbeat designs. In 1975, he opened Tootsies (named after the 1920s Al Jolson hit, “Toot, Toot-Tootsie [Goodbye]),” in Houston’s Galleria area, which grew to include cutting-edge designers and many Texas-based designers he loved. He later moved to more up-scale Houston areas with additional locations in Dallas and Atlanta.

Rosmarin was also committed to the community and charitable causes, demonstrated by such examples as making a major donation to the Contemporary Art Museum’s 2015 exhibition Texas Design Now and hosting fundraising events for nonprofits at his store. His sister, Houston painter Susie Rosmarin (who worked at Mickey’s store for a while, is also interested in design and, interestingly, many of her abstract paintings have the illusion of a fabric-like texture) told the Chronicle, “He seemed fine. He loved life. He was full of energy.”

Rosmarin attended Bellaire High School and the University of St. Thomas. He leaves behind a brother, Kenny Rosmarin; sisters Susie Rosmarin and Judy Pliner, daughter Aurey Harper and Laura Lee well as many friends and employees. A funeral service will take place at 11am on Monday, June 20, at Emanu El Memorial Park.