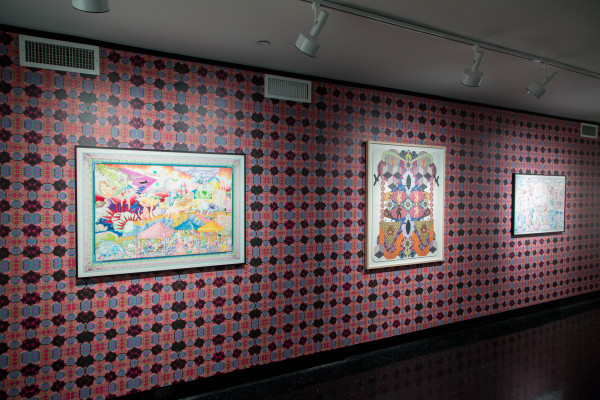 Surface Dwellers, an exhibition of elegant, elaborate drawings by Christopher Wallace and Samantha Persons set against a backdrop of densely patterned wallpaper at Lawndale Art Center, is one of the best exhibitions currently on view in Houston.

Persons and Wallace live in their heads. They have to. The level of time commitment and solitary meditation required to produce these dense, intricate works requires the kind of artist who has a lot to say to the voice in their head. In this way, while Surface Dwellers is certainly a collaborative effort that compels the viewer first as an installation, it quickly becomes a dialogue between two specific and rather different individuals.

What Wallace and Persons do share is the fatalism inherent in their deep commitment to horror vacui, in their resistance to the unfinished. Artists who work in this maximalist vein know when a work is finished. It’s finished when there’s no more room to breathe. It’s finished when the thing is consumed by itself. The artist and the viewer leave an experience of this kind of work visually satisfied and mentally exhausted. As a formal metaphor for life I understand it completely. Live as much as you can and collapse when you’re too tired to keep your eyes open any longer. 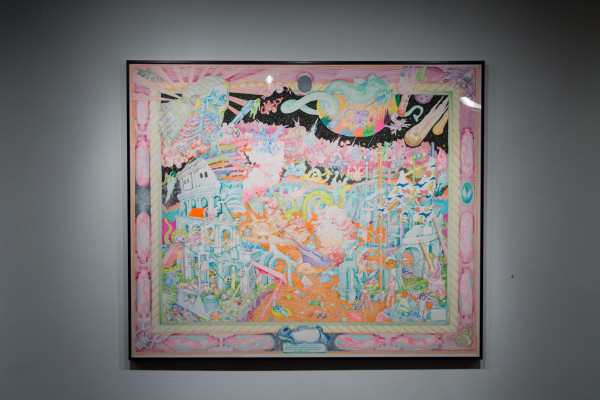 Wallace’s voice in this dialogue becomes clear to me more quickly because I recognize myself most clearly in his witty, sardonic take on life in the fully developed capitalist culture of 21st century America. He follows in the proud tradition of visually dense social satire that stretches from Brueghel to Daumier, Hogarth, R. Crumb and Mike Judge. Limp pieces of eight-hour-old pizza hang like garlands over invocations of Boschian hells made ludicrous by the presence of Alf, Pac-Man ghosts flying through the Colosseum and the sinking Neo-Classical architecture of revolutionary America. 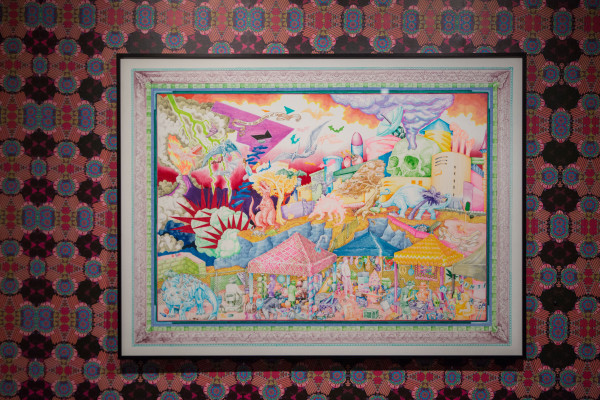 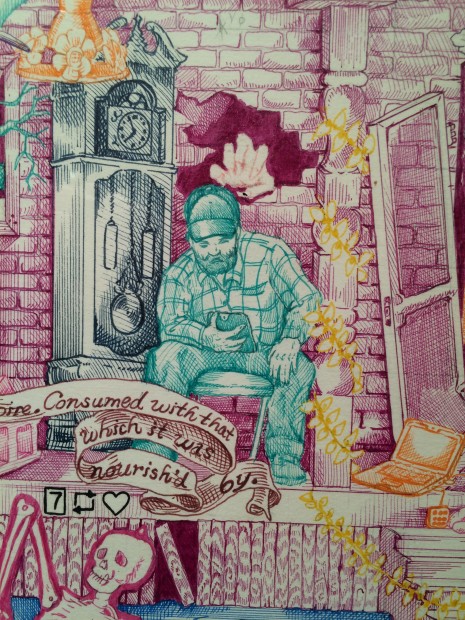 Wallace allows me to laugh in the face of the full knowledge that the absurdity of the cultural war zone we live in shows no sign of becoming any less absurd. But he also creates truly poignant vignettes. In one small section of one of his drawings we see a bearded blue-collar guy checking what might be an invoice on a clipboard while a grandfather clock nearby chimes away the hours of his working life. What then? As if to answer the question, a fragment from Shakespeare’s Sonnet 73 unfurls on a banner telling us that life is consumed by the fire “it was nourish’d by.” 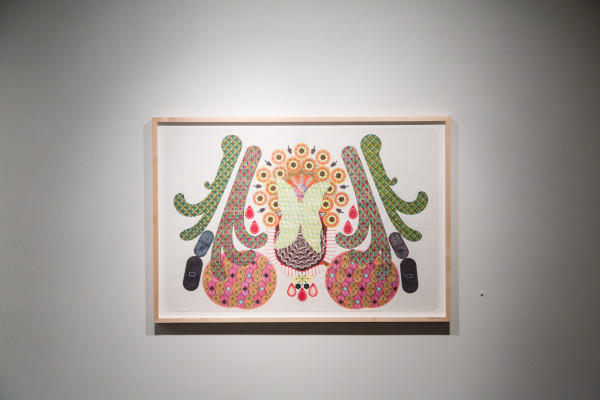 If Wallace presents as a kind of Wildean raconteur, strolling the streets of a crumbling empire, Persons appears to us with a darker, more interior consciousness. Her work immediately recalls Tibetan sand painting. Sand paintings are meditative representations of the three-dimensional world, of the universe.  But the intuitively rational, flexibly reasoned world evoked by Persons’ meticulous drawings is a representation of her inner world. In it, inconsistency, asymmetry, unpredictable glitches and spontaneous ruptures exist inside a structure that nevertheless hangs together as a cohesive subtly asymmetrical whole. We can think of this ‘whole’ as the human being, and the glitches and ruptures as those unique attributes that make us individuals. In this way, Persons’ drawings do not merely claim to be about her identity as a queer artist; they formally embody that identity. 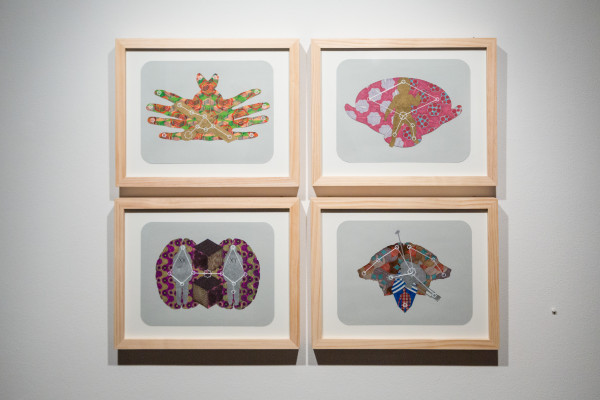 Samantha Persons, Constellations: The Mariner and the Semen, The Breeder’s Cup, Iphis and Orlando, The great love of Ursa and Pioneer (2016)

As I looked at Person’s drawings and wallpaper, the French poet and philosopher Georges Bataille immediately came to mind. Bataille is famous for his economic idea that organisms, including people and economies, contain unbounded amounts of energy and that in a capitalist economy the excess of that unlimited energy must be expended in luxurious expenditures such as art, monuments, and non-reproductive sex. If it is not, he warns, it will be expended in brutality and war. This is the essence of horror vacui—no energy is left unspent. We all have to find ways to displace the excess psychological, sexual and intellectual energy that we generate. Fortunately for the viewer Persons chooses to expend at least some of that energy which Bataille called “the accursed share” in the dense fabric of her queer cosmos. 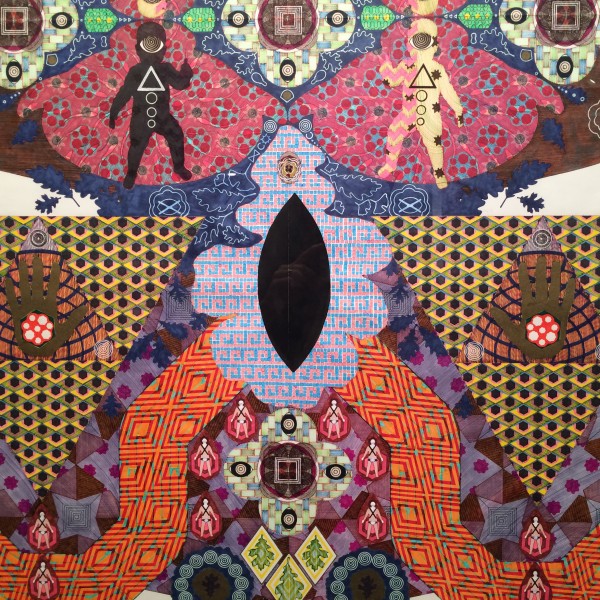 At the bottom of one of Wallace’s pieces of pulp fiction, in one of the hand-drawn baroque frames that surround his tableaux, he draws the words “If destruction be our lot, we must ourselves be its author and finisher.” The phrase comes from Abraham Lincoln’s address to The Young Men’s Lyceum of Springfield, Illinois in 1838. His speech was prompted by the murder and burning of a black man by a mob several weeks before. At the time the United States was just 62 years old and Lincoln, then only 28, already saw the destruction of the American project in the form of the mob mentality. I suspect that Wallace and Persons share a rather grim view of the current condition of human life on planet Earth. But in their devotion to their craft and their commitment to a clear view of the silly, brutal, fluid and ambiguous condition of humanity, they represent the very antithesis of the mob.

Through June 25 at Lawndale Art Center. Photos by Adam Clay.