by Ed Schad May 20, 2016
FacebookTwitterEmail 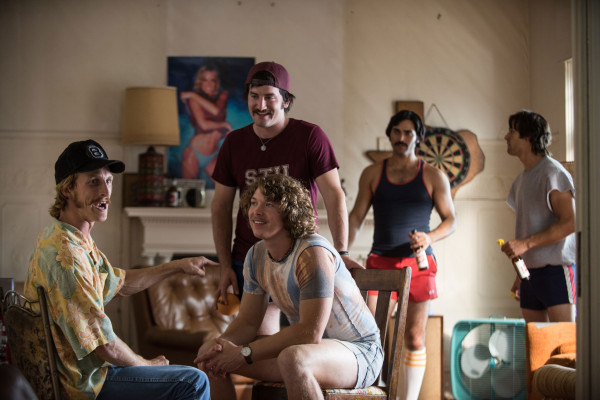 Still from Everybody Wants Some!!

The closest I’ve come to experiencing a coherent statement on film about Texas is probably the wheel-chair ridden former sheriff Ellis’s “This country is hard on people” in No Country for Old Men. He’s just repeating what the movie already knows. The Coen brother’s film is one of the most precise movies about Texas and the Texas landscape ever made. The characters are as Texas made them and the land (around Marfa) wears every event of its often quiet, sudden-violence history.

However, No Country for Old Men is just one movie and putting it together with Blood Simple (the Coens’ first movie) does not a canon make. As Texans, we are still waiting for our great student. I mean student in the way that Ingmar Bergman was a student of the Swedish islands, Fredrico Fellini was a student of Rome, and Martin Scorsese is a student of Manhattan. Each of these directors found a way to tap into how history conspires with landscape and circumstance to create people and lives. For a filmmaker like Scorsese, the flip side of Newland Archer’s uptown Manhattan is the Bowery of Bill the Butcher, and both characters and locations have a great deal to do with Jordan Belfort and Paul “Paulie” Cicero. The theater which creates that legacy can only be New York.

The closest we have to our student is Richard Linklater. He is not a regional filmmaker and I would doubt that he has the building of a Texas canon on his mind, but it just so happens that this Texas-based director has given us a quorum of Texas-based stories. SubUrbia zooms in on the parking lot of a single Austin convenience store. Boyhood (due to the unfortunate circumstances of the family in the film) gives a virtual overview of the state from Houston to Big Bend, from Austin’s bar scene to scrub-land stock tanks. Dazed and Confused and Everybody Wants Some!! trade specifics for an overall Texas feel (football fields, liquor stores, and drinking in cars), while Bernie and Slacker almost have the weight of proper studies, of East Texas and Austin respectively.

Linklater knows Texas intimately and he gets details absolutely correct. In Everybody Wants Some!!, it is a Dr. Pepper can. There was a time, if you remember, when aluminum was thicker and soda cans were substantial objects. It could have been the pull tab that Linklater used to produce nostalgia but it wasn’t: it was the visual weight of the can. That is type of thing that Linklater gets right, the type of thing that cuts across all the circumstantial and specific differences that set various subgroups of Texans apart and brings them together into a mutual understanding. 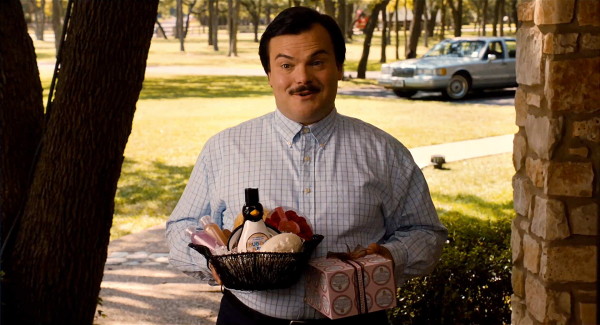 Another one happened in Bernie: the first time that Bernie brings his eventual friend and victim Marjorie a gift of bath products after the death of her husband. You’ll notice that Bernie parks at Marjorie’s house on a dirt driveway and then ambles up a winding sidewalk to the house. That moment is Texas to the core. The fact that the house is set back more than a usual distance from a visitor’s arrival spot is almost a metaphor for Texas’ libertarian streak. We are friendly, but damn sure like to keep our distance. We also like to flaunt our land, though not embellish it. That walk up the driveway is a perfect Linklater detail.

Like Scorsese and Bergman, Linklater movies talk to each other. Some critics have noted that Boyhood ends with Mason Jr.’s arrival at college and Everyone Wants Some!! picks up where it leaves off, showing a few days of its character Jake’s college freshman experience (by extension Jake can be seen a surrogate of Mason Jr., having some hard-earned fun). Everyone Wants Some!! can also be seen as the next step of Dazed and Confused. The 8th graders that we took so much delight in seeing get their revenge on Ben Affleck have now grown into their bodies and are in college, complete with majors and baseball scholarships.

In Slacker, one character goes to see his roommates’ band and is refused at the door while in Boyhood, Mason Sr. too goes to see his former roommates’ band and has the privileged access to go during the sound check. The roommate theme continues in the big white house in Slacker, with multiple narrative stands converging upon it; In Everybody Wants Some!!, it’s the same over-populated situation, only the stories spin out from it rather than to it. Mason Sr. in Boyhood transitions from type of person who would populate Slacker’s world into the type of person who would populate Bernie’s world, God-fearing and country-dwelling.

These moments of confluence and connection (networks extending far beyond his opening car sequences) are how Linklater builds a view of Texas. In a sense, he goes block by block. All of that pining for connection and understanding other people so often present in the conversations of Linklater’s (often overly talkative) main characters (see the Before trilogy) is embodied by the movies themselves. When an older version of Mason Sr. dies, an older version of Bernie might embalm him and make sure he has a proper burial. Dazed and Confused’s Slater’s passion for weed, plus a few years of nuance and sophistication, would easily take on the weight of ritual put forth by the habits of Everybody Wants Some!!’s Willoughby. In Linklater movies, Texas is slowly pulled open and studied, whether through realism or through a Texans’ most common shared lens, which is nostalgia.

However, does a coherent reflexive impulse across an array of films with a singular setting offer an equally coherent insight into the place itself? In other words, is this how Texas works? I can only speak as a Texan, and, for me, it works. As Linklater’s network of Texans increases, it stands to reason that eventually the network is going to get around to you, where you feel but one step removed or even on just the other side of a fine, not very substantial curtain separating you from the people in the film. This happens to me in Linklater films. I feel that the same landscape that made his characters made me.

Bernie is a masterpiece of Texas realism. I’ve often wondered about the reason for this, and I’ve come to center on the fact that much of the film’s success lies in the inscrutability of the film’s main character. We never quite know what is driving Bernie (how could a person be that nice, and, subsequently, how could someone so nice be a killer?), and we let gossip fill out his profile. Delivered in perfect accents (because they are real accents), a succession of interviewees attempt to get at Bernie. This is, of course, how every profile of every person in every small town in Texas is constructed.

The last person allowed to give testimony about their true intentions is the actual person having the intentions. Texas, as a phenomenon of human relationships, builds Bernie right before our eyes. Jack Black is perfectly cast. That Bernie does not quite fit in is embodied by Black, who is a little too California for Texas. The friction lends itself to the oddity and mystery of Bernie. I have to admit that after watching Bernie, you could ask me as a Texan to give a few remarks on Bernie and I’d be happy to do so. I could find words in my mouth like, “I’ve never met the guy, but… ” or, “I’ve been through that part of Texas and I can tell you this… .” Linklater has managed to not only make me nostalgic for Texas but feel like I am directly part of the experience of the story.

Which brings me to the problem of Ethan Hawke. When I survey all of the movies of the Linklater Texas canon, it is Hawke who bothers me the most, but might be an important part of the canon’s credibility. Hawke has impeccable Texas roots. He was born in Austin and his grandfather was a long-time member of the Texas legislature. Like many Texans, he is related to someone from the deep South in that he’s the great-grandnephew of Tennessee Williams (but properly removed as Texans likes to be—close but not too close to the Deep South). That said, he has been gone a long time, dividing his time between Brooklyn and Nova Scotia. 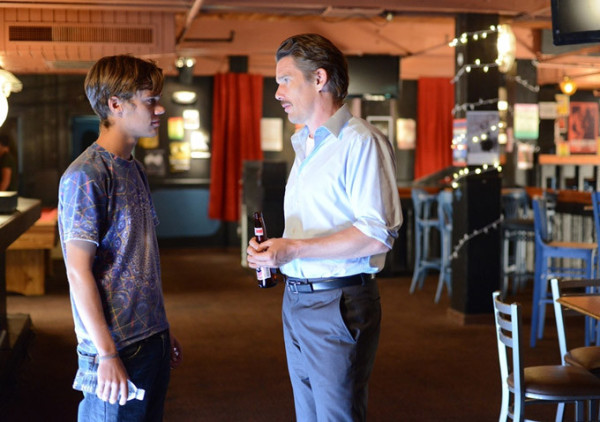 Hawke does not quite fit in Boyhood as Mason Sr. Part of the reason why may come from Linklater’s particular power as a filmmaker, but Hawke (partly due to the Before trilogy) has too much star power, and is too identifiable as an actor to register cleanly in a movie dedicated to, above all, realism. This is, surprisingly, not true of Patricia Arquette, whose ability to overcome that same obstacle is part of what won her the Oscar for Best Supporting Actress. There’s no way for me to believe that Hawke could ever don the jeans and tucked collared shirt of a suburban dad.

But I’ve decided that this friction that I get with Hawke is the friction that I personally feel whenever I visit Texas, a state I haven’t lived in for almost 20 years. I’d like to think that I am fully Texan, a true embodiment of the state, but after you’ve been gone awhile, it’s no longer the case. When you return, you start to notice things you’ve never noticed before; you see disturbing realities that you glossed over when you were growing up, and you start to feel slightly like a fraud. (Though, remarkably, you have trouble understanding the nature of the very thing that makes you feel like a fraud.)
If I were to develop a theory of Texas cinema and what it takes to embody this huge, crazy state, I would have to involve the friction that Hawke offers. There are Hawkes everywhere in Texas: people who have lived elsewhere and have returned. It is a small miracle that this ubiquitous not-quite-Texan makes an appearance in the form of Hawke in Boyhood. It’s also easy to get that type of detail wrong (just look to Cybil Shepherd in The Last Picture Show for proof). But it’s this detail that leads me to believe that Linklater will eventually be Texas’ true student. Thankfully—and I write this with my whole heart—he won’t have to make a movie about the Alamo to achieve that distinction.
1 comment

Keeping Its Own Counsel: ‘Looking West Toward House...

Linklater also exposes Texas’s feelings toward Mexican/Mexican-Americans as brown people are barely, if ever, a part of his Texas. When brown people do show up, they compliment white people’s traits rather than stand as their own characters (like the hokey ‘I’m-glad-this-white-person-showed-me-what-edumacation-is’ Mexican-American character in Boyhood or the doofus bartender who gets no lines but gets into a fight with the most delusional and self-absorbed member of the baseball team in EWS!!). Linklater builds a Texas canon insomuch he speaks for white people’s conception of Texas as this vestigial yet nostalgic cowboy dreamland where Mexicans are background characters rather than an inherent part of Texas/Tejas identity.