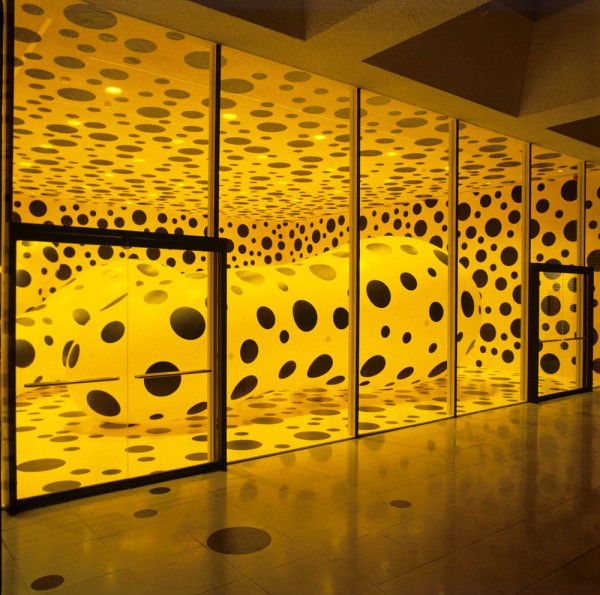 The Museum of Fine Arts, Houston has announced its big upcoming summer exhibition Kusama: At the End of the Universe, which opens June 12. Though an active artist since the 1950s, the 87-year-old Japanese artist has been enjoying a major and extended international spike in attention since her retrospective at MoMA in 1998. (She started doing the dots in the 1960s.)

Of course, before she became a global dotty sensation, Houston’s Rice Gallery hosted a memorable yellow Kusama installation in 1997, proving once again that legendary Rice curator Kim Davenport is way ahead of everybody else.

The MFAH’s show will feature two of the artist’s signature “infinity rooms” which are interactive-ish (and kids will dig it). Via the museum: “Kusama’s Aftermath of Obliteration of Eternity dissolves the viewer’s perception of physical space through the play of light, creating a wondrous but intangible realm,” and “Love Is Calling represents the more physical side of Kusama’s production. Visitors stroll through this mirrored room, where soft sculptures shoot up from the floor and hang from the ceiling, while colored lights within these forms produce a strobe effect.”

The title of the MFAH’s show is after one of Kasuma’s (very small) pen-on-paper works from 2011 titled End of the Universe.

The show runs through Sept. 18. For more info, go here.

No More Free Parking at the MFAH