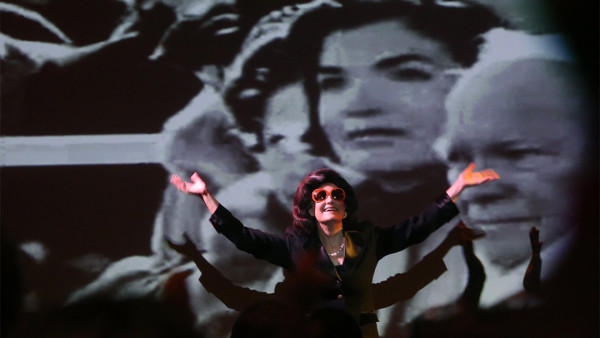 Karen Finley is a performance artist, poet, playwright and musician whose work has been concerned with the viscera of sexual politics, female power, censorship, the holocaust of AIDS, suicide, rape, and more in the panoply of human misery. She’s explored these subjects and associated emotions regarding loss, oppression and injustice in often intense, raw, and wailing performances of spoken word and action—at times using her own body and the besmearing of various foodstuffs onto it—to convey the denigration, pain and rage of her interests.

Finley is also celebrated as a defender of artistic free expression due to her involvement in a 1990 controversy that saw the NEA veto grant recommendations to her and three other artists, out of politicized concerns over standards of public decency. Finley, as one of the “NEA Four,” challenged the decision, and the artists won their case, and financial reinstatement, in the lower courts in 1993. However on appeal the Supreme Court ultimately upheld a “decency and respect” clause for NEA funding deliberations.

On April 1st, Finley presented The Jackie Look at the Kessler Theater in Dallas. The act was ostensibly a dissection of the media’s obsession with celebrity and tragedy, examined through the literal and metaphorical lens of Jackie Kennedy’s ringside seat to her husband’s assassination, and the power of photography to capture and fix within the popular consciousness a traumatic moment or event, while also trapping the protagonists within it and neutering the value of anything they achieve prior or subsequently. The work also drew attention to misogynistic tropes used to define the role of women, whether at the pinnacle of national prominence or in society at large. Finley, dressed smartly as Kennedy, stalked about the stage as a sarcastic and cynical former First Lady, to a backdrop of well-known tabloid images. She proceeded to describe her experiences while complaining bitterly about her lot in life since the president’s murder due to the consequences, projections and stereotypes she has been imprisoned by in the face of misfortune and unending scrutiny.

It was an interesting beginning, but the evening was soon revealed to be a master class of egomaniacal, whirling selfishness, and appalling disregard for the audience’s time and patience. Any intellectual and critical structure was overwhelmed by a litany of indulgences including a rambling script; mortifying audience participation (designed to assist “Jackie” dance the stress away at Studio 54); archaic, petulant crotch-rubbing; and an outdated societal critique which today’s ubiquitous photographic capacity and the social-media age have diluted. Ultimately the more accurate reason for the evening’s program emerged: Finley being given a stage and unsupervised access to a microphone, with which she managed the astronomical task of time distortion, bending 90 minutes into what feIt like an endless night.

Finley as Kennedy unhumorously ranted, for example, that she, not the Sixth Floor Museum at Dealey Plaza, should be entitled to the domain name www.jfk.org, and during an online tour of the museum, publicly humiliated two workers who speak on the site’s video introduction. On she raved, interminably, about the stresses and strains of life lived within whatever stoic mould the public wanted to cast her in until, apparently, Princess Diana’s death provided her with some respite. The most excruciating moments arrived with Finley’s relentless shouting of the phrase, “you know” louder and over, as a criticism of the media’s fixation with Kennedy’s daughter’s (Caroline’s) perceived overuse of the term during interviews when she was considering running for public office, at the expense of her achievements.

This was accompanied by ear-splitting screeching about Jackie Kennedy (and by extension all women) being permitted by patriarchal society a sense of identity only through benignly purchasing clothes at retail stores. The latter assertion may have been within the context of a sixties icon’s life but it was a contributing factor to how hollowed and irrelevant the entire performance seemed for a contemporary audience. While there remains work to be done, Finley seems to disacknowledge any progress that has been made toward women’s equality in the decades since Jackie Kennedy’s era, or indeed, the ascension of Finley’s own career, which is an extraordinarily stunted position to take, particularly in a year when a woman is running—indomitably—for president.

While satirical observation and criticism of American culture, the tyranny of sexism, entrenched gender values or audience discomfort may have been among Finley’s concerns, at the merciful conclusion of the event, interest in her intentions had long since evaporated. What she had achieved was condensing and consigning Dallas’ cultural worth, segments of its vital tourism industry, individual workers, its civic history, and the city’s wider reputation into that one awful moment in 1963, in exactly the way the artist spent her entire show decrying. In some respects the presidential assassination is to many Texans who remember it what 9/11 is to New Yorkers, and it grips the imagination these many years later. But what Dallas artists and their vibrant, evolving community deserve—and should expect—is more than a New York visitor relegating their city’s contemporary narrative to (or reflecting it as) merely a hackneyed singularity of twentieth-century lore. Finlay’s repetitive slide show, diarrhetic text, and hemorrhaging delivery constituted a tiresome, sensorial assault on the ears, eyes, and nerves tantamount to a case of blistering artistic ebola.

Relatedly, and in terms of the general conveyance of sentiment that words can deploy to an audience, one might guide Finley to the readings of her late friend David Wojnarowicz, particularly his contribution to the Needle Exchange benefit at the Drawing Center in 1992. With humor, fear and urgency, his words illicit a sense of wrenching agony and pathos that form a long-lasting bond with the listener. Finley’s work, at the Kessler at least, and despite its similar guttural bent, successfully manages to destroy any such emotive connection.

A final point, highlighted by Finley, is that there’s a staggering narcissism of too many lauded and mythologized artists, who believe, falsely, that their laurels are supporting them, and it often goes unchecked  as they greedily inhale the limited available art world oxygen, rendering an airless environment that younger generations of artists are choking on. The Jackie Look, replete with Finley’s def-con level 1 self-absorption, is a suffocating example.

Great review. She performed an iteration of this at the Society for Photographic Education conference back in 2008 when it was in Dallas. It was the last event on Sunday morning. It was strange, in exactly the way you describe.