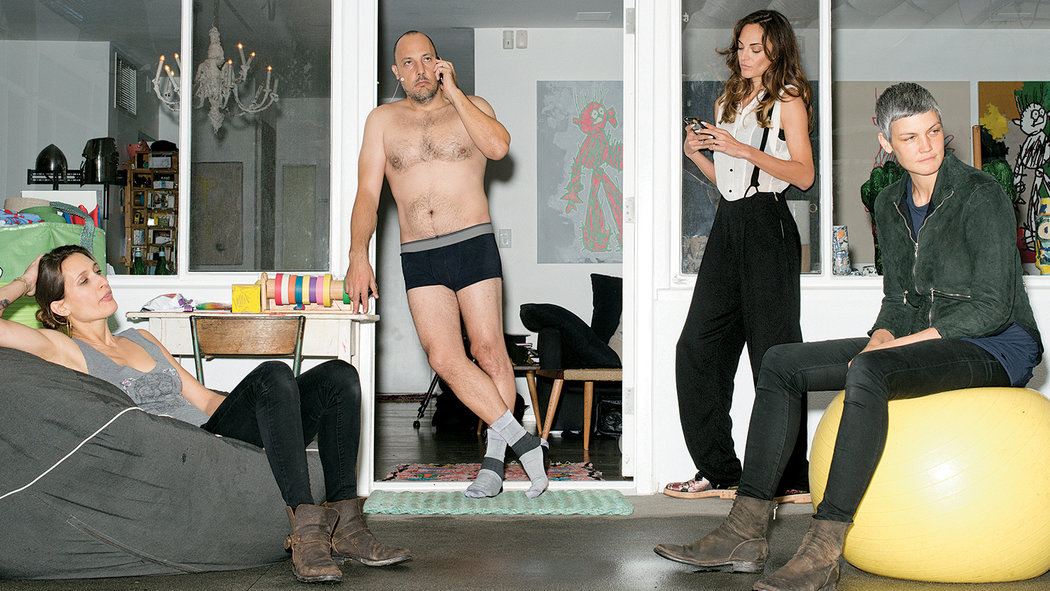 This is how one of our region’s more prominent artists reacted to a panel discussion held last weekend at the Nasher Sculpture Center. I ran into her as we were leaving the auditorium and asked her what she thought. I’ve known this artist for years. All the blood had drained from her face, though her look was resigned.

The panel had featured the notorious art flipper/dealer Stefan Simchowitz (along with some other bigwigs in the art-world; the discussion was a huge draw), and it turns out this artist’s dismay at Simchowitz’s methodical strategy for his… progressive brand of art-world venture capitalism was par for the artists in attendance.

Over the course of the next 24 hours, I’d run into a lot more artists who had attended the event and the refrain from them was the same. They were essentially demoralized by Simchowitz’s attitude toward art and artists (which wouldn’t bother anyone too much if Simchowitz didn’t use his money and influence to try to make and break artists). These artists I spoke to aren’t naive ones who don’t make a living. These are seasoned artists who do make a living. And ‘demoralized’ is the perfect word to describe what happens to art when Simchowitz zeroes in on it.

After listening to him sound off for 90 minutes up on stage, one thing is clear: Simchowitz may enjoy the controversy, but he does not fundamentally recognize why what he does induces cringes from artists and people who love art. And so the problem starts here: he doesn’t have an intrinsic understanding for the transformative, poetic impact that art can have in the world—I’d just say he doesn’t have a “feel” for art, which requires an emotional and psychological spectrum he can’t access. It’s like being tone deaf or color blind. But with art it’s worse, because plenty of people who have no feel for art can still enter the art world by hiding behind academic analytics and language (whereas a tone-deaf person is not going to play in any symphony). In Simchowitz’s case, he just throws a lot of money at his lack-of-feel problem, and recasts art as pure product. His aggressive “commonsense” approach is meant to make art lovers shut the hell up, because we all know money talks louder than anything else.

But art lovers won’t shut the hell up when it comes to Simchowitz. And Simchowitz gets angry and defensive when art people question his methods. At the Nasher, he kept instructing the other panelists to get rid of the notion of a ‘moral high ground’ in the art market. Like most committed capitalists, he objects to the idea that a ‘morality’ should invade something as straightforward as an economy. He has a point, up to a point, and artists and those who love art have long ago accepted that there’s no way to keep art separate from a market. But economies are built on the backs of human ideas and endeavor, and art is one of the most human of endeavors. To demoralize an artist through unchecked capitalism is to also ‘de-moralize’ the art, which essentially strips an artist of his will to produce and disregards the ineffable, undefinable quality that makes us, as humans, value art at its core.

When economies lose sight of the human at the end of the transaction, we have crises and disasters. In Flint, it’s the water. In art, it’s the exploitation of an artist whose career tanks at the hands of mismanagement and greed, and the bundling of that artist’s work into something like a junk bond to be sold to the lowest bidder, or locked away forever, or destroyed like unwanted retail inventory. Simchowitz buys young artists’ work in bulk at huge discounts (what is a discount when you haven’t established a market and Simchowitz is your market?) and then attempts to sell the work off to other moneied people and celebrities who aren’t doing a lot of homework when it comes to art’s meaning or history.

In the art world, any “moral high ground” (when it comes to transparency, movement of inventory, production of editions, payment to artists, i.e. all the transactions that make up a market) as practiced by consensus is really just a convenient term for the much-needed system of ethics and honor toward the art and the artists, as well as the people parting with their money. And people who love art, including many collectors, have internalized that art is worth protecting from the vulgarities of a cold and unchecked flow of money, regardless of how many art fairs are in Abu Dhabi or Hong Kong. Here Simchowitz would have a problem with the word “vulgarity,” because he can’t recognize the shape of vulgarity as it relates to art. On the panel, Paul Schimmel and Amy Cappellazzo seemed almost mystified by Simchowitz’s bluster, because in the end, though everyone on stage was talking about art, Simchowitz was only able to talk about art in his very narrow understanding of its potential monetary value, which while being an aspect of the art world the panelists deal with, is not the only art world that Schimmel and Cappellazzo inhabit. Fundamentally liking art for art’s sake doesn’t have a dollar amount attached to it, no matter how high prices climb.

The artist is unlike any other ‘content creator’ (forgive me); he’s the only one who makes a discrete object that (generally) can’t or won’t be mass produced or disseminated. Simchowitz mostly buys art that’s already been produced, though he very much wants to be a (mass) producer of ‘product’ and he idealizes that business model, no matter its (or his) track record in relation to working artists. Simchowitz claims he got into the art business, as opposed to, say, tech startups, because he likes ideas, and he’s right that art is primarily about ideas. But in art, the idea does indeed usually lead to an object, and the impulses and ideas and direction of objects evolve. An art object can have a life outside the artist’s studio, and all of us who love art are responsible for that object, both as an object and as an embodiment of its originating impulse, and as a place marker in the evolution of an artist. Buying one physical work of art—or dozens or hundreds or thousands of them—knowing full well they are likely to be stored in a warehouse, unwanted and forgotten (as Simchowitz admits is a likely outcome of his buckshot approach to mass buying and producing), is a dehumanizing tactic only the most cynical collector can make. And it’s a route only the most naive and desperate artist—or cynical or conspiring artist—would agree to participate in.

Simchowitz makes for good copy, but there’s so little traction and/or presence in his operation and output that it’s very unlikely people will remember him—or the art he hawks (if you can call it that)—in 100 years’ time, or even ten years. On Saturday, Simchowitz confirmed everything we’ve read about him; he gamely performed the part of the bad-guy art flipper, and he knew he was doing it, and he called out the audience, the press, and the panel’s organizers for setting him up to be the villain. But here’s the thing. He can’t play any other role; he can’t bring any compelling gray area or nuance to his arguments. He can demoralize us, but he can’t surprise us, because he doesn’t grasp the whole picture in the first place.

the problem here is with artists, they are the ones that should be fighting this guy and this type of behavior head on, but they have gotten lazy, and very little know anything about how the real world of business works and how extremely complicated and successful it has been and how quickly one can get over run by the reality of it. artists need to know how to take care of their business instead of begging for someone else to take care of it for them. the past is way, way past and artists and not anywhere near what they used to do nor is the money driven world we live in even closely related. sink or swim, eat or get eaten, or rather, educate yourself and defend yourself from sharks like this dude. also, educate yourself in the ways of business. if you are reading this and you are alive, & you can bet capitalism is not going anywhere else but here, anytime soon, not at all…

Carl, I don’t totally disagree with you, but as an artist who recognizes that we are the most exploited and least powerful players in the art market, it seems kind of unfair to say we’ve “gotten lazy” when people take advantage of us.

if you educate yourself in the ways of business that won’t happen to you, if you don’t do that your asking for trouble in america, where cash is king, and if you don’t do that i call a laziness factor in your game, sorry if that offends but i feel its the truth and its your responsibility to your self and your fellow artists to do right, and artists and art are not what/where they used to be because we have gotten lazy IMO. so its time to work, if not simco (or someone like him not so obvious) is coming for your art and he’ll take it, sell it, and drop you like a you know what (insert something cheap and what not etc. here)

He’s kinda just the new Saatchi. Same strategies and both made their money in the advertising industry.

I don’t really think galleries avoid selling to him due to some kind of higher moral ground — they just have totally different strategies for creating long term value for their artists. Simco’s strategies are incompatible and are arguably more short sighted. He also is making too many enemies, making himself a liability as a collector.

Capitalizing on art as a “commodity fetish”…

A major difference between Saatchi and The Sim is that Saatchi has always maintained a big public space to show the artwork. These spaces (as he’s moved from space to space) are truly massive; no small undertaking in terms of overhead, etc. This alone points to Saatchi’s commitment level and engagement with the art and the art community that Sim can’t (and won’t) touch. Anyone who’s maintained a space and done exhibitions knows how insanely costly it is. Sim would just find this wasteful and sentimental and against his whole model of pure efficiency.

Simchowitz has the Depart Foundation and a big studio complex.

Ah, yes. Sim’s industrial farm. (Do you remember the movie Motel Hell?) I’d say the cost difference between Saatchi’s massive central London space and Sim’s operation is so vast that it’s nearly impossible to draw a direct comparison. (Though of course I haven’t seen the tax returns.)

Right on point, Christina, as usual. Thanks!

An a propos art project: http://rhizome.org/editorial/2016/apr/25/institute-for-southern-contemporary-art/ .

“Institute for Southern Contemporary Art (ISCA) by artists João Enxuto and Erica Love, an essayistic video that doubles as a promotional piece for the Institute of Southern Contemporary Art (ISCA), a proposed artist platform tailored to optimize the creation of art for market consumption. . . . [ISCA] draws on the increased use of algorithmic analysis in the art market. Recently a roster of programs, like ArtRank and Art Advisor, have been developed for the sale of art. ISCA dials the quantification process back earlier in the process of an artwork’s life to its production. . . . ISCA fellows make art that is geared toward maximal market favorability, while the aforementioned supercomputer captures data on their behaviors and creativity, in turn feeding a larger algorithmic system that shapes the production, reception, and sale of art.”