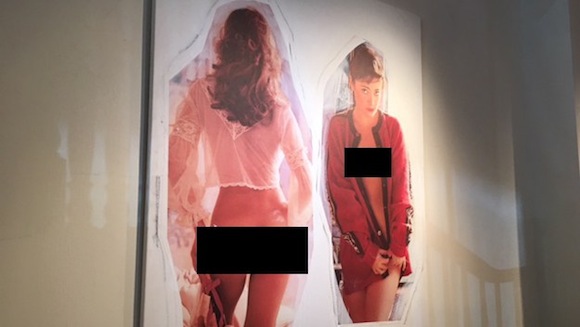 A sassy New Jersey gallerist’s federal lawsuit over an Englewood city code violation it received for displaying artwork of a partially nude woman is making the rounds of national news. Filed last week, the Borghi Fine Art Gallery sued, saying its constitutional rights were violated when it was issued a violation with fines of $1,250 per day and the threat of up to 90 days in jail over artwork showing a woman’s bare buttocks.

The lawsuit was first reported in the Courthouse News Service, which quoted owner Laura Burghi: “The painting was not anything pornographic or offensive, even to children. You see more on a plumber when he bends down.” The art, displayed to the public in its gallery window, showed two women, one from the back with a bare butt. “This is life. You have a penis. I have a vagina, you know?” Borghi said. “What’s going on in our society is a lot worse than what’s going on in my window.” Well said.

Yesterday, Utah Governor Gary Herbert signed a resolution declaring pornography a “public health crisis” at the Utah state capitol. Granted, hard-core pornography is now ridiculously easy for youngsters to access, but we also should be vigilant about how we define pornography.

And, the El Paso Museum of Art has been under the gun in the past couple of days after a man wrote a letter to the editor of the El Paso Times. The exhibition, “Desert Triangle Print Carpeta,” features printmakers from El Paso, Albuquerque, and Tucson, a seemingly innocuous show. Visitor Alberto Rivas wrote, “Few of those prints feature rather unsavory depictions – despite their artistry – with at least one altogether indecent (if not downright obscene) specimen.”

Let’s hope that it’s simply a slow news day in El Paso and that’s what caused a couple of TV news stations to run with the nonstory of an indignant museum visitor.