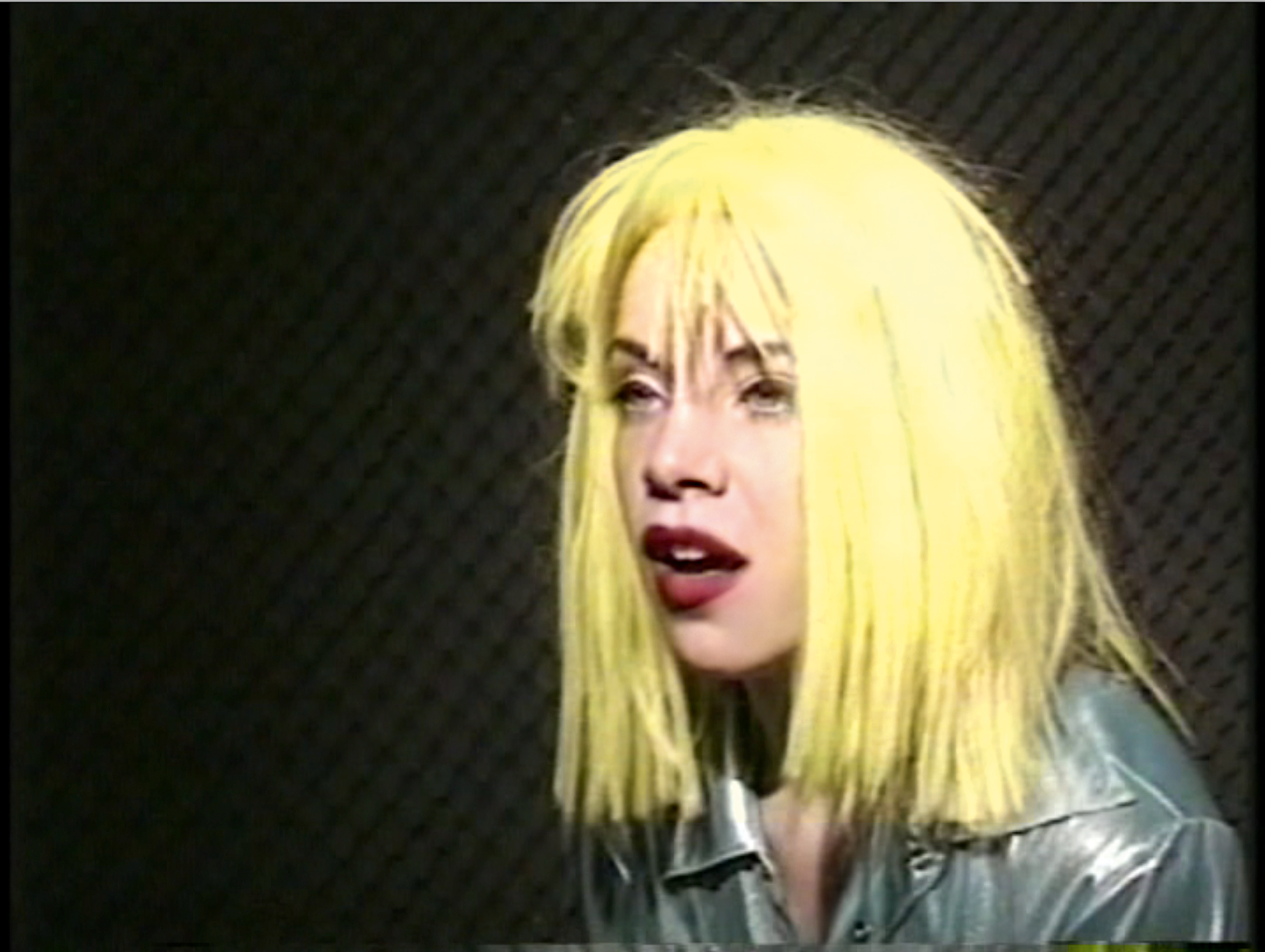 About 10 years ago, when I was in my mid 30s, people in their early 20s (including some artists I showed in my gallery) were mining the mid-to-early ’80s for inspiration: clothes and hair, music, design. They hadn’t even been toddlers when MTV launched, so the aesthetic felt new and fun for them. Hello Kitty, Missing Persons, Liquid Sky, Blade Runner. But this was a here-and-now, hybridized version of it on a speed cycle created by the internet, upgraded with some shimmering digital-age tweaks.

I remember driving with a very young artist to an install in Austin around that time; at my request he brought the tunes for the trip and played me a whole new album by the band Glass Candy, in which I heard all manner of Depeche Mode, Yazoo, Flock of Seagulls, and Bronski Beat—in an unsettlingly spot-on imitation of this ‘80s stuff. But this new-old (old-new?) music was even more emotionally flattened than earlier electro-pop—it was weirdly devoid of the original impulse of tech excitement that had propelled the ‘80s songs. So Glass Candy was eerie to me, because my defensive instinct was to interpret it in the manner of a conspiracy theorist: is the band being ironic? Are the band members even old enough to be nostalgic? Or are they being earnest?

So like a good old-timer, I tried talking to my co-pilot about why this music rehash bothered me so much. He explained that his generation simply liked this kind of sound, and liked it with no agenda. 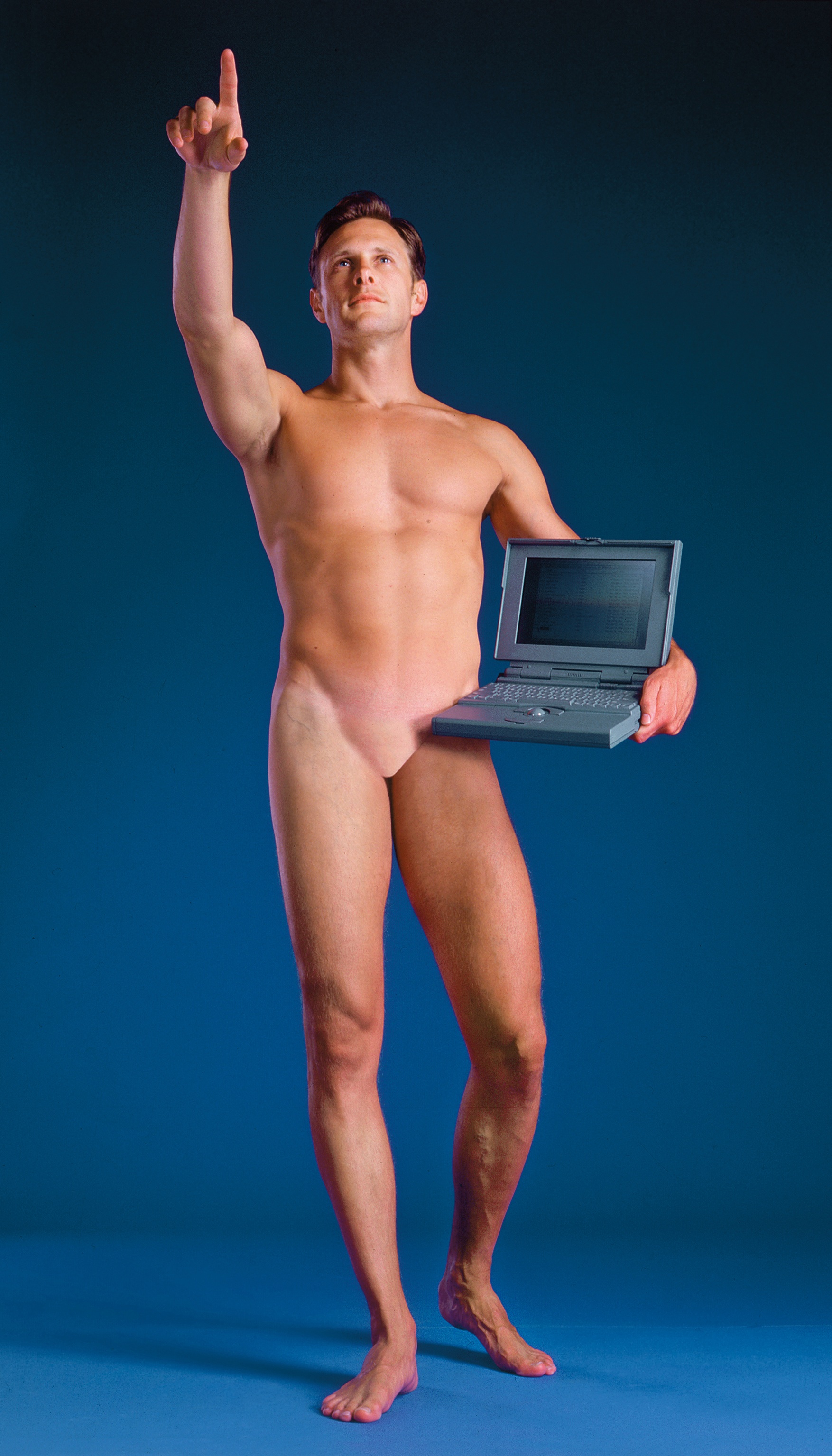 Ten years later: When I walked through the current show at the Blanton Museum of Art at UT Austin, which is a survey show of art in the ’90s and called Come as You Are, I felt like I had entered a psychological Twilight Zone similar to the one described above. It was a busy Saturday, and there were dozens of college-age people milling around the exhibition. Here’s what a lot of college-age people on campuses wear these days: flannel, platform soles, choker necklaces, horn rims, brown lipstick. It’s one thing to see these looks on the street or online, and another to see it while walking through a show featuring 20 year-old work by Alex Bag and Diana Thater. It doesn’t help that, though the show title doesn’t mention the show’s American-ness, all the work in the show was made in the United States, whether by native or foreign-born artists. So despite your happy or dismayed reaction to the idea of a big ‘90s survey—the first one! I personally was psyched about seeing it—there is no Damien Hirst or Luc Tuymans or Maurizio Cattelan here, nor a whole host of other artists who for me helped define the ‘90s. And so in a strangely reductive way the show often feels overly familiar and homespun, and too small and a bit ad-hoc, like something that sprung out of the background in Reality Bites. I’m not trying to be trite here. 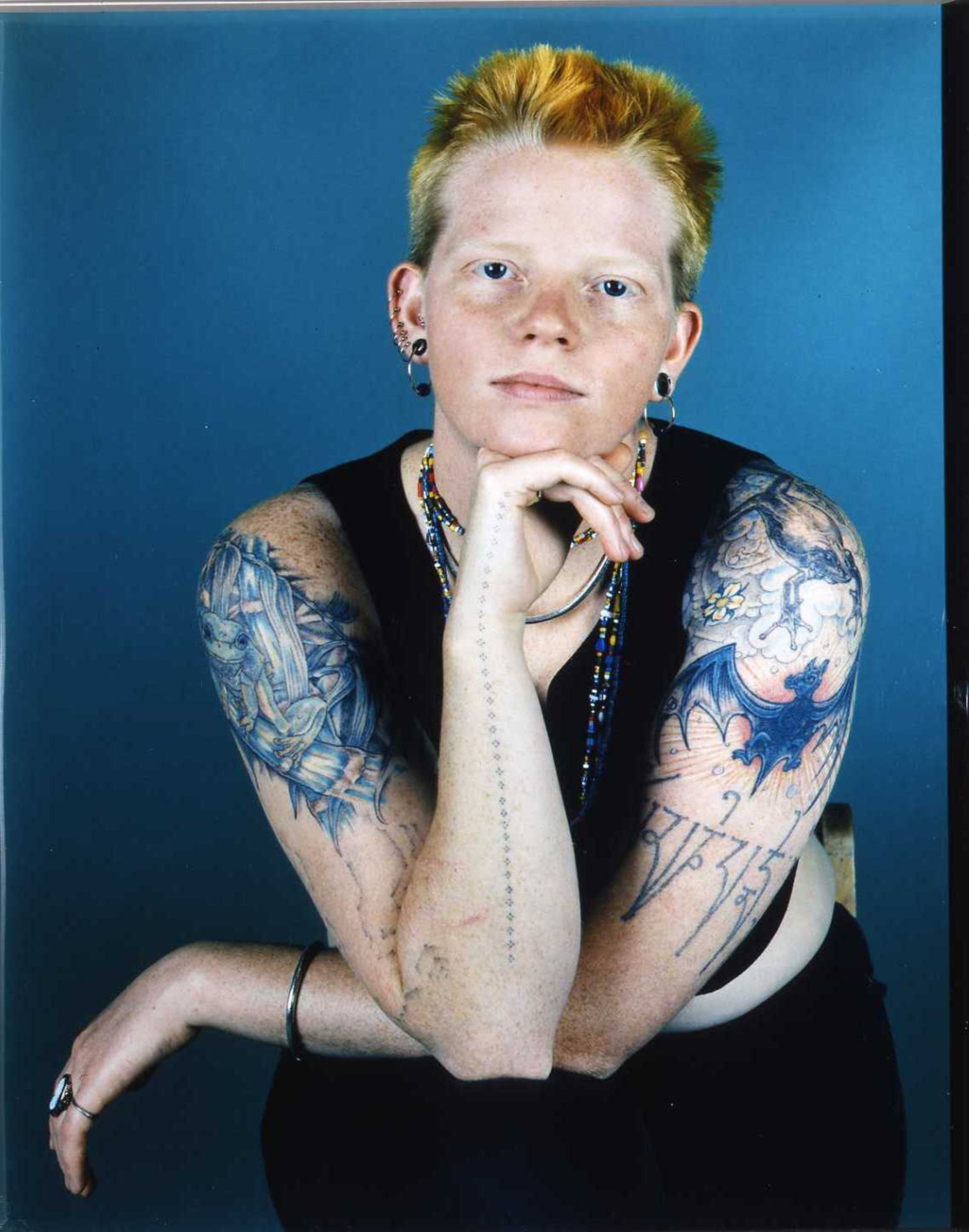 Because despite the tendency of Gen-X and ‘90s artists to downplay any blatant desire for fame and fortune (which really is generational), as individuals they ground out some truly ambitious work, and some subversive work, and some really unexpected work. Not enough of that is here, and in fact as a whole—despite some very good pieces by some very good artists—it feels a bit like a solid MFA show, circa 2016. This is a little creepy to me, because it means one of several things (or maybe some of all of these things).

1) Because social and political concerns haven’t moved on much in 20 years, art really hasn’t moved on much either, as much as we’d like to flatter ourselves that it has. Maybe 2016 really is an atmospheric retread of 1993, even if the language we use has been tweaked (as in: we used to say “3rd-wave feminism,” but we now say “identity politics,” or we used to say global, and now we say multi-cultural). This is depressingly slow movement if you think about it, given the kind of mass dissemination of information we have now. With good reason, Greenpeace still exists and fights a losing battle, and so does Amnesty International, only now there are dozens if not hundreds of other organizations competing for our attention on the same urgent issues. So every generation is agitating about the same stuff? Why wouldn’t they? This is the art-activist version of Groundhog Day.

2) The show’s curators unconsciously revised history through a 2016 lens and made the show look too much like today, which separates it from its 1990s feel and strips it of his historical resonance. In this case, it reads like the curatorial process became blinkered by current and constant media static and talking points. Is Come As You Are a politically corrected look back at a decade that was already working to politically correct itself? John Currin, for instance—one of many bad-boy reactionaries of that decade and certainly its most notable painter—is not in this show, though middling examples of Laura Owens and perfectly okay examples of Elizabeth Peyton and Karen Kilimnik are. How did that happen, unless there’s a meta political correction taking place here?

3) Maybe most artists coming out of MFA programs now are so unoriginal that the things they make are the same things (aesthetically, at least) that were interesting to art lovers once upon a time, including in 1996. People like this kind of thing because it’s familiar, and maybe it sells. So Come As You Are quite unwittingly and unfairly looks like this month’s thesis show. This is a timing problem as much as anything. It’s not the fault of the ’90s artists. 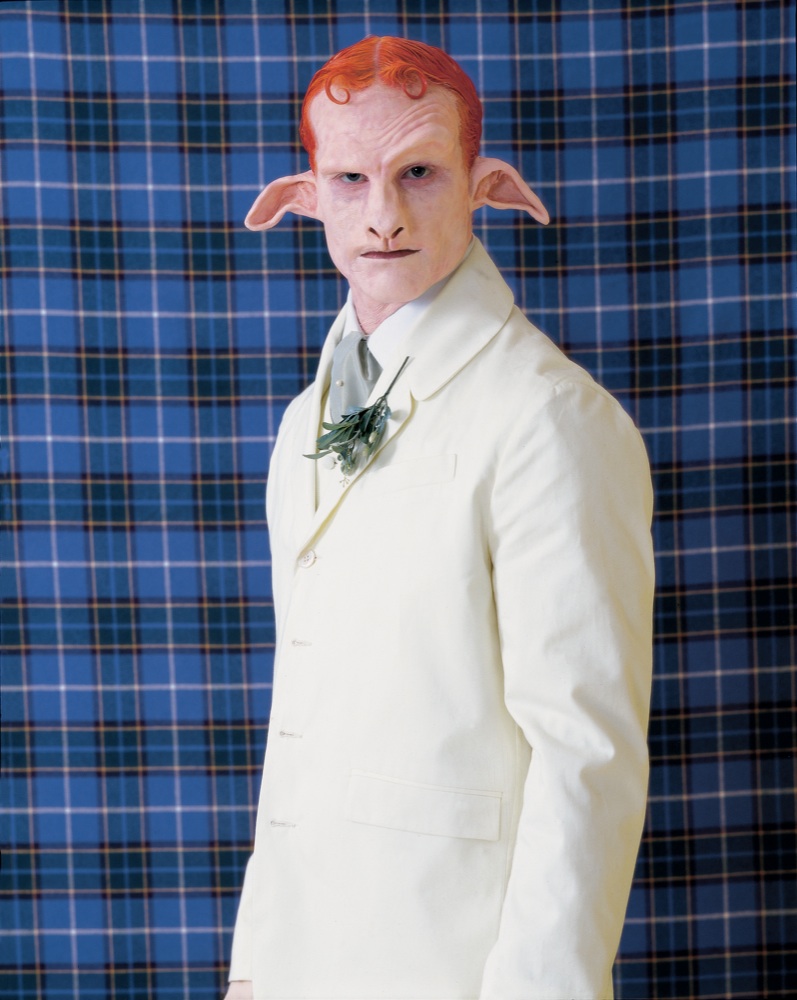 4) Those involved in organizing the show simply did not have the time or resources to mount an expansive and thorough survey of a whole decade’s worth of output, or to borrow more of the decade’s Greatest Hits. (Eighteen months ago, the Modern Art Museum of Fort Worth made a game effort of doing just that with its ambitious ‘80s survey Urban Theater. Whether you liked it or not, they got it all in there.) This show’s title, in this case, could have used a parenthetical or caveat about its own limitations. Come As You Are: Art of the 1990s is an authoritative-sounding statement, and maybe the organizers were a little too into the idea it being the first ‘90s survey to launch. The scholarship here is good, but the end result feels more like a bits-and-pieces presenation. This might be someone’s ‘90s show, but it’s only partially mine. Matthew Barney’s work is limited to periodical screenings that aren’t in the exhibition space itself; for better or worse I didn’t see a second of his Cremaster onslaught. Vanessa Beecroft isn’t here. There isn’t a single Fred Tomaselli pill trapped in resin. The college-age kids walking through the show didn’t seem to mind at all. Why would they?

5) Generally: We’re all retreading culture so quickly now that we’ve already folded back on ourselves. It’s difficult to honestly historicize anything in this environment. 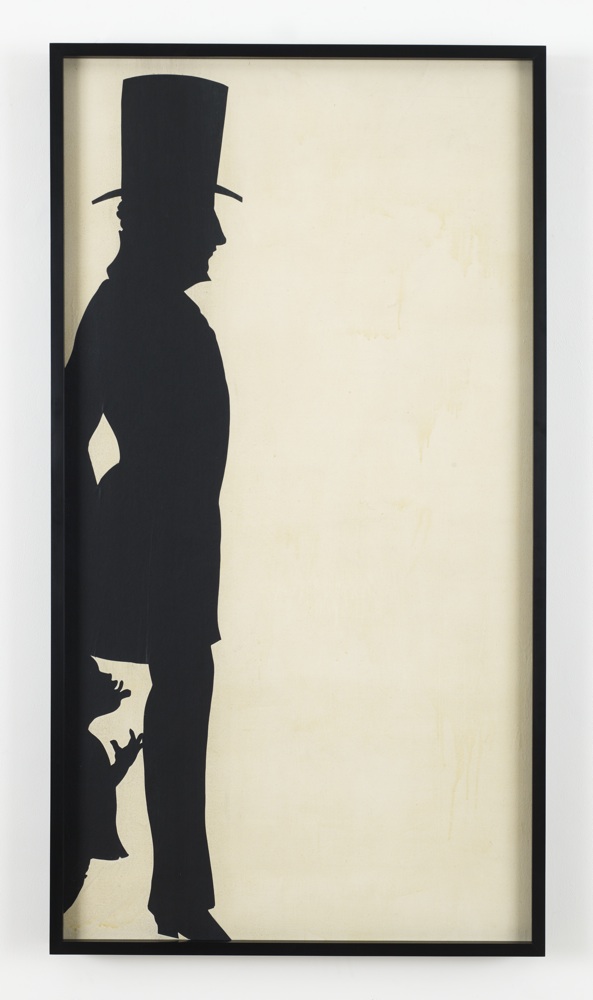 So maybe the show suffers from a bit of each of these. It’s not all bad news: There are some strong pieces by some great artists in this show. Janine Antoni’s Lick and Lather is here; a big silvery version of one of Felix Gonzalez-Torres’ candy installations is here. Black artists get a solid showing, and often their individual pieces are the strongest in the show: Fred Wilson’s Portrait of S.A.M. (Euopeans), Glenn Ligon’s Invisible Man; a Gary Simmons smeared chalkboard drawing. Again, though, there’s often a problem of there not being enough work by any artist to get a feel for what they could do.

That’s the danger of big surveys. If you can’t afford to pull out all the stops, especially in this age of mega-galleries doing museum-quality shows and mega-philanthropic dollars making museum shows look incredibly impressive, maybe do a different kind of show with a different thesis. As much as I love the work of Doug Aitken and Kara Walker and Mariko Mori, they’re represented here by such a small glimpse of what they accomplished in the ‘90s that I was nearly insulted on their behalf. 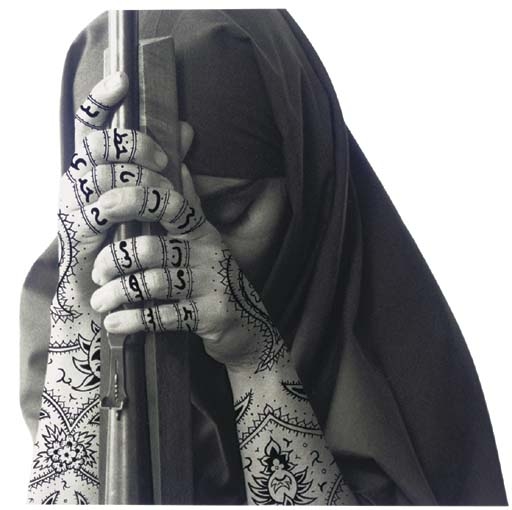 And again, it’s hard to think of work as being in a historical (or historicized) survey when so much of it reads like it could be seen in a “recent acquisitions” show at any museum—right now, today. Shirin Neshat’s untitled woman of Allah—praying and folded around her own rifle—might have posed for her portrait just last night. There is zero separation between her ‘then’ and our ‘now.’ What does this really mean?

Through May 15 at the Blanton Museum of Art, Austin.

You are right on with your thoughts on this show

Bitter sweet time: I’ll go bitter first. One alibi for the similarity you are seeing here is what I call the “experimental music syndrome” you know… you hear something touted as experimental music on late night FM; seems to always sound like someone hunched over a breadboard of soldered transistors and knobs emulating peacocks mating… (just like the “experimental music” made by beatniks in 1958) it has become it’s own genre rather than what its name entails. Contemporary art has become “contemporary art” (you know, that stuff that shocks you and is full of irony and etc etc.) if you don’t know the rest, well, I save you from my super duper bitter pills.

On the shiny side, when one looks at the evolution of trends (isms usually) one can see that since the turn of the century the pace of creative style has been forced to advance exponentially with each passing decade. Artists have been expected to bust through all current trending to invent something completely original to the point that this has become the point. Every attempt at contemporary art must be an experiment. Most artists have run out of experiments. So look what you get: Art that attempts to look like an experiment. Not many new avenues left, hence the rehash. Oh, the sweet shiny part? Oh yes: We’re finally getting sick of the insistency of the incessant new. Its time for the cream to rise to the top where development as alternative to pure experiment becomes valid again.

As far as bucking the Blanton for not pulling out enough stops. I say lets give them a break. Arts funding is a bitch these days, I think we are lucky to get to see what we get and they pulled off something worth seeing.

If I’m feeling optimistic, I might suspect surveys like this are necessary to help artists demarcate the 90’s aesthetics you list from the present moment. The more those artists and their work is from “back then”, the more we will be forced to take stock of how this period is different.

If I’m feeling less optimistic, I’d say we as artists haven’t fully reckoned with the developments of the last 20 years or proposed any new ways of thinking about them. I’d say that’s true of us on a wide social scale, not just artists.

When I was in school (2 yrs ago) this was the look:
http://3.bp.blogspot.com/-L1BBBdjJyAY/UqOqqpFMgPI/AAAAAAAAADk/9VV6CYpiLtQ/s1600/photo.PNG

Glass Candy is just a flat band. Here’s some new-old music that’s better. All from the last 5 years.
https://www.youtube.com/watch?v=khvJQpy0SsQ&list=PLZoYTLjZwNJa1E-ZAHEW8icXo_Dym7roc