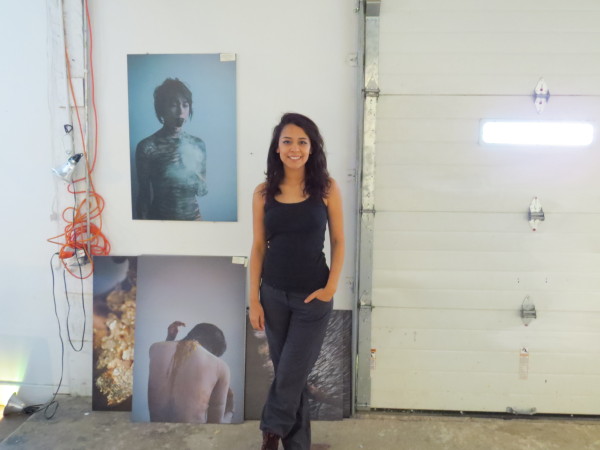 Every year when San Antonio’s Contemporary Art Month comes to a close, the local community votes for the exhibitions and projects that impacted them, and the artists with the most votes in different categories receive “CAMMIE Awards.” This year’s “Best of CAM” award for “the most exceptional artwork” was presented to Daniela Riojas, a young and adventurous emerging artist, for her one-night performance in her ‘Southtown The Arts District’ studio.

A native of the border town Eagle Pass, Riojas’ path to becoming a practicing artist is not a typical one. It evolved from personal trauma. The daughter of a preacher, Riojas has always embraced spirituality but was conflicted between traditional church practices and contemporary pop culture, so at age 18 she fled to  San Antonio and in 2010 studied journalism at Northwest Vista College and in 2012 english and creative writing at UTSA.

While a student, Riojas was involved in what turned out to be a failed relationship that left her pregnant.  She took the abortion pill over a three-week period. Afterward, to cope with the pain and emotional anguish accompanying this process, she turned to digital photography and produced a series of compelling self-portraits.

For Blood History/Self Portraits (2011), Riojas photographed herself in staged scenarios at various moments of the ordeal, including before, during, and after ingesting the pills and suffering their effects, which involves a lot of bleeding. In the left section of a photographic diptych, she presents two images of her bloodied nude body, with each figure extending an arm towards the other in a gesture of support that here references internal strength. Splintered black bands superimposed over the two bodies evoke a host of associations, from prison bars to bandages to scars, while a background of intense light brings spiritual overtones to the scene, as if to remind the young Protestant woman that she is still a spiritual being. In the right section, she bows to a divinely illuminated egg, which is composed of tiny digitally collaged images of various textures; it symbolizes the life that awaits after her ordeal. The photographs reflect Riojas’ background in English literature (think Shakespeare) as well her love of Rembrandt’s use of light, and the popular 19th-century photographic practice of tableau-vivant.

Since then, Riojas has practiced art as a means for self-discovery. Influenced by the ideas of Carl Jung and Joseph Campbell, her development involves ongoing research into ancient Aztec and Mayan mythologies, and these civilizations’ extinction by colonization. During a 2013 residency at the Vermont Studio Center, Riojas turned to the late artist Ana Mendieta as a role model. (Mendieta was a Cuban-American performance artist who explored physical and spiritual connections to nature through performative photographs and sculptures made using her body and actual earth.)

For her photographic series Being and Becoming/Self Portraits (2013), Riojas assumed the role of different Latin American goddesses engaged in a variety of rituals based on myths, and she saw each performance as a psychological journey into the collective unconscious. In one narrative image, she covered herself in and ingested gold leaf, because Aztec mythology considers eating gold to be a cure for neurosis. Other examples deal with cleansing and healing, especially when Riojas portrays Tlazolteotl, who was an Aztec goddess of sexual misdeeds as well as of purification, and thus the perfect vehicle through which Riojas could exorcise whatever Protestant guilt was still lingering from her abortion. Yet, whether we know the mythological narratives underlying the photographs or not, Riojas’ images can be universally understood as being about communion with the cosmos. In every image, Riojas uses light or moving abstract forms to suggest that she is immersed in a deeper or higher plane of consciousness.

From 2014-16, Riojas was classmates with Fernando Andrade and others in the Guadalupe Cultural Art Center’s new Artist Lab program. Encouraged by her mentors and peers, Riojas presented her first public performance, The Indictment of Cora Montgomery, in 2015. Dressed in a white gown, the artist performed a strenuous ritual in which she used a coarse scrub brush to “whitewash” white paint from her arms. which injured her skin, and then attempted to wash clean from a scroll on the floor the printed words of a 19th century racist text written by Jane Cazneau, a New York-born resident of Eagle Pass who used the pseudonym Cora Montgomery in a book filled with prejudicial slurs against indigenous peoples. Throughout the performance, her own blood seeped from a tube stored beneath her clothing, effectively saturating her dress over her pelvic and womb areas. Documentation and relics from the performance were included earlier this year in her second installation at the Guadalupe, along with a video and a participatory installation that consider the San Antonio River as a sacred place and metaphor for the collective unconscious. In studying the history of the river, Riojas learned that its point of origin, the ‘Blue Hole,’ was once a sacred site to indigenous people, which contrasts starkly with its current function as a commercialized tourist attraction.

The first of Riojas’ ongoing river-inspired projects is the music video Frida’s Heart (2015), which she co-produced and co-directed with San Antonio filmmaker Laura Varela for the band Femina-X, which Riojas fronts. An extension of her performance art, the video shows Riojas emerging from the Blue Hole, seeking out and finding ceremonial objects, turning herself over to shamans who take her through a series of rituals, and ultimately cutting her own throat as a form of sacrifice by giving her blood and body back to the river in an act of rebirth.

The related installation, Rio Abajo Rio: River Beneath the River (2016), includes photographs, video footage, clothing worn by Riojas while performing rituals, and found objects arranged to create a ceremonial space in which visitors can, in offering, pour corn (ground by the artist) into water brought in from the San Antonio River. In the photos and video, Riojas documents similar offerings she performed in New Mexico at the Rio Grande and the Blue Lake waters of Taos Pueblo—sites determined by following the direction of the San Antonio River. (While at the pueblo, Riojas learned how cornmeal is used for blessings and purification of water.) 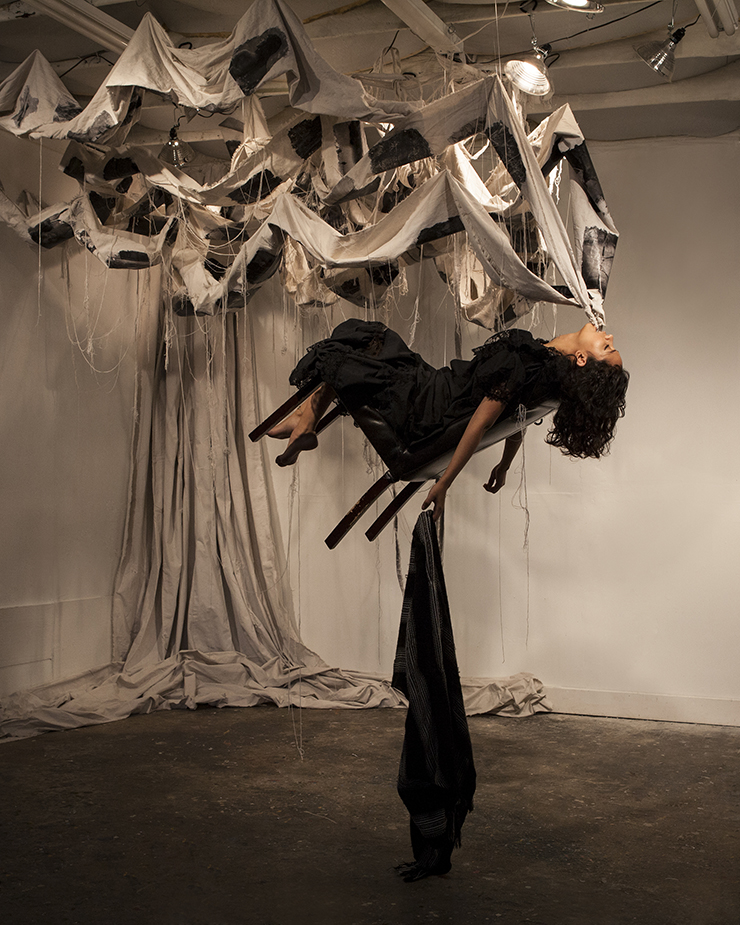 My Well, My Stream, The River, 2016, performance/installation in the artist’s studio.

In her CAM award-winning performance, My Well, My Stream, The River (2016),  Riojas explored her connection to the river by remaining motionless for three hours in a tableau-vivant that echoes stylistic aspects of Bernini’s Ecstasy of St. Teresa, as evident in the artist’s pose and in undulating canvas folds emerging from her mouth that recall the turbulence of St. Teresa’s drapery; the canvas represents the river/unconscious and is imprinted with the artist’s photographs relating to the theme. Seated in a suspended chair with limbs relaxed and head tilted backward, Riojas entered into a state of ecstatic meditation, accompanied by live music performed by local Krishna monks. Here, she turned her art into a personal religion, and allowed herself to become one with the universe.

Video works and footage from performances discussed in this article may be viewed at www.danielariojas.com.