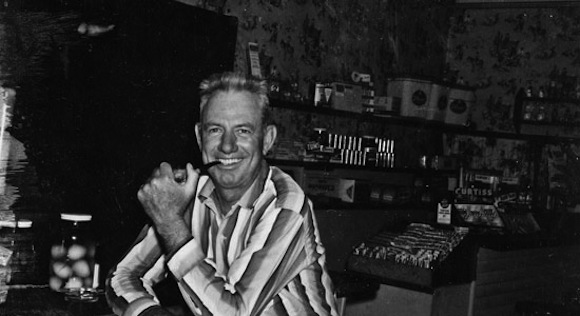 For those who have not heard of one of Texas’ most eccentric painters or seen the 1999 award-winning documentary about him, Austin’s Big Medium at Bolm will screen Forrest Bess: Key to the Riddle tonight, April 4, at 8:30pm.

Bess, who was quite prolific in the 1950s and 60s, almost disappeared after he moved to his family’s isolated fishing camp at Chinquapin, Texas, near Bay City. Described as a “Texan, fisherman, visionary painter, and aspiring hermaphrodite,” Bess died of cancer in 1977.

In 1981, the Whitney Museum of Art presented a solo show of Bess’ work and, in 1988, there was an extensive gallery exhibition of his paintings. As part of the 2012 Whitney Biennial, sculptor Robert Gober curated an exhibition of Bess’ work, along with archival material. In 2013, Houston’s Menil Collection presented the retrospective “Forrest Bess: Seeing Things Invisible.”

According to IMDB, the documentary is a mere 48 minutes long, but its description of the film reads, “This film about a man, wich aliens have a practice of the phsiology lessons on him.They are doing totally dangerous things”

Someone should probably fix that. Meanwhile, here is the preview: