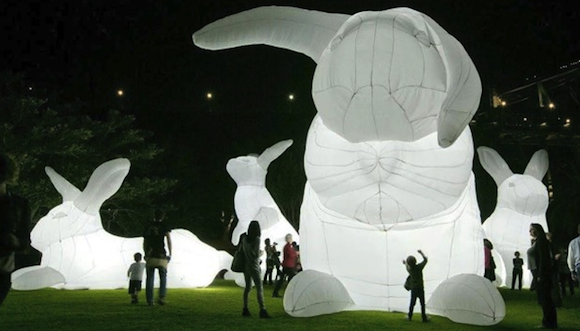 Artist Amanda Parer’s 23-foot tall inflatable installation of a group of rabbits, entitled Intrude, has been shown in many places throughout the globe and now it’s on a U.S. tour. It will be on view in Houston at 1600 Smith Street from May 9th through the 14th. Intrude will make for some fun playtime for the kids, bunches of inevitable selfies, and will light up internally at night.

For the native Australian (now living in Tasmania) Parer, rabbits have complicated and serious implications, as she reports on her website:

Rabbits in artist Amanda Parer’s native Australia are an out of control pest, leaving a trail of ecological destruction wherever they go and defying attempts at eradication. First introduced by white settlers in 1788 they have caused a great imbalance to the [country’s] endemic species. The rabbit also is an animal of contradiction.

They represent the fairytale animals from our childhood—a furry innocence, frolicking through idyllic fields. Intrude deliberately evokes this cutesy image, and a strong visual humour, to lure you into the artwork only to reveal the more serious environmental messages in the work. They are huge, the size referencing “the elephant in the room,” the problem, like our environmental impact, big but easily ignored.

Well…if art is all about context, Houston will most likely just enjoy the cuteness factor. Unless you view it with an ominous soundtrack:

FYI – Tasmania is in Australia…