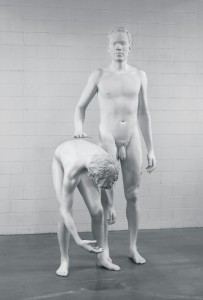 Huck and Jim, Ray’s sculpture rejected by the Whitney

Over the past six months, Houston’s Menil Collection hosted three lectures by Los Angeles-based sculptor Charles Ray. You may have heard of Ray from a recent controversy where the Whitney rejected a sculpture commissioned from him because it was too risqué—the work showed male genitalia and “was rejected on the grounds that today’s Meatpacking District crowd might find it too controversial.” How ghastly.

Ray’s lecture series at the Menil was aptly titled Thoughts on Sculpture and seemed touch on everything: Matisse, bronzes, Rodin, and holes (see our review of that talk here). To those of who who missed it (or don’t live in Houston), the Menil has recently made all three lectures publicly available on YouTube. Go here to watch all four hours and forty-five minutes of sculpture-y goodness.