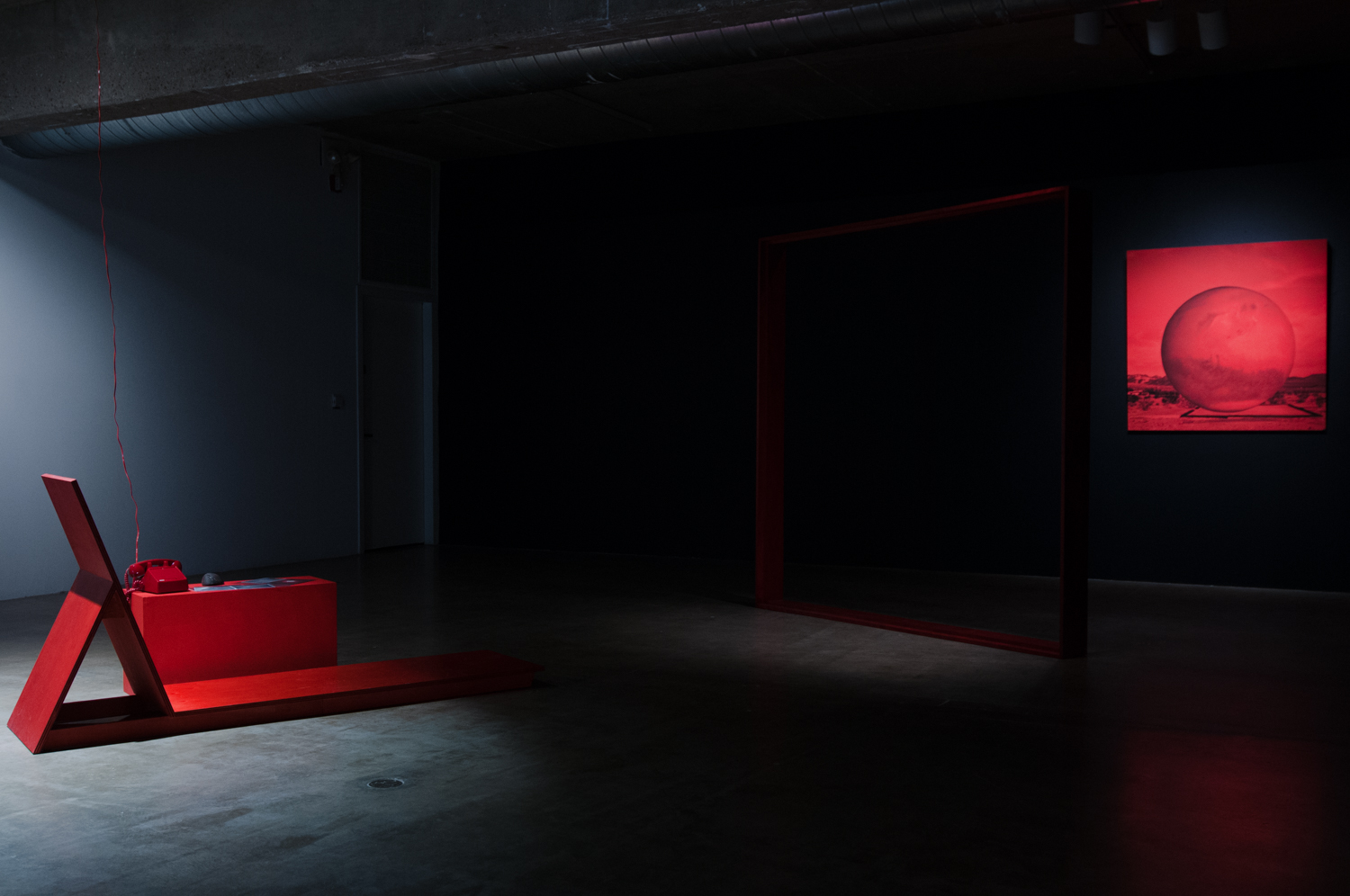 The Interview: Red, Red Future is an exhibition of sculpture, photography and interactive installation at the Contemporary Arts Museum Houston that, according to its prominent wall text, combines “technology with minimalist aesthetics” to “shed light on invisible forces and power.” I don’t know what this means but I do know that what the artist currently known as MPA actually does is create an exhibition that embodies a creepy regression toward religiosity, tinged with UFO hysteria and sweetened with a touch of Big Brother.

While discussing a small red-tinted self-portrait photograph in a Q&A with curator Dean Daderko, MPA describes how, after consulting various astrologers and psychics, she discovered that Mars is a planet associated with violence and aggression. She calls it an “action” planet. The photograph in question is the result of MPA performing these “Mars-Energy” emotions and actions on the foundations of abandoned homesteader shacks in the California military base town of Twentynine Palms. This smells a lot like pagan ritual to me.

The first thing to greet the viewer when they reach the gallery where our Red, Red Future awaits strikes a sour note. It is a sign that reads: “ARTWORK IN THIS EXHIBITION IS INSTALLED ON THE FLOOR. Walk around the artwork. Don’t step over it. Thank you.” Exhibitions that greet me with signs telling me what to do, let alone in a snotty tone, always make me want to turn around and leave. I get enough of that in the Kafkaesque world of social health services I deal with every day. Signs of this sort are less to protect artworks than they are to control the viewer’s experience. I’m not having it. 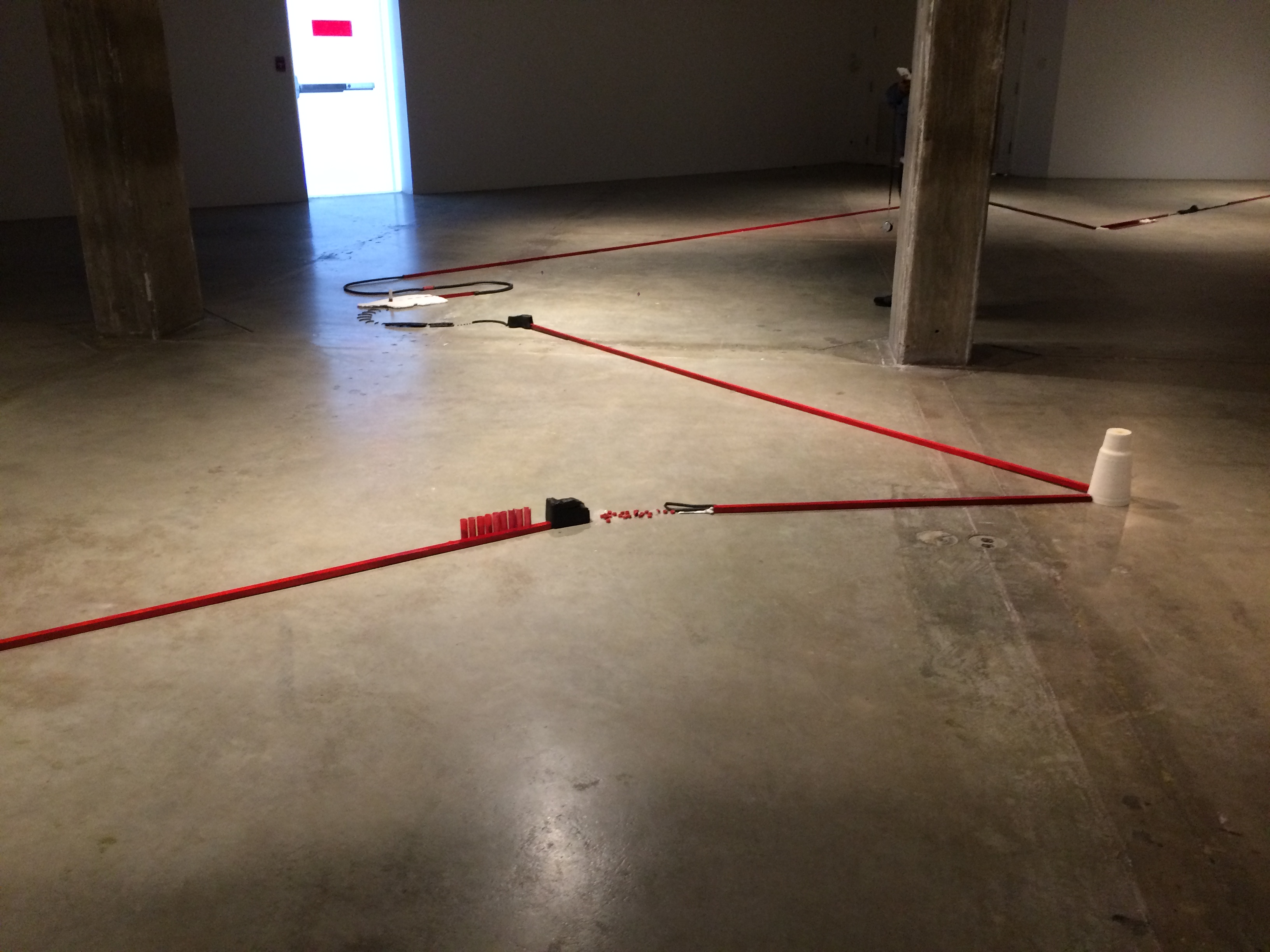 Theoretically at least, the sign was in place to protect The Long Line, a zigzag floor sculpture made of thin pieces of red wood linked by small piles of ritually arranged desert trash acquired on the artist’s walks around Twentynine Palms. In the artist talk Daderko described The Long Line as a “bloodline” that references “colonization” and the “lines used to divide people and property.” To me it obviously evokes the remains of some kind of pagan ritual. Indeed, Daderko makes a point of highlighting MPA’s use of “ritual” as a “call to action.” I’m not having it. 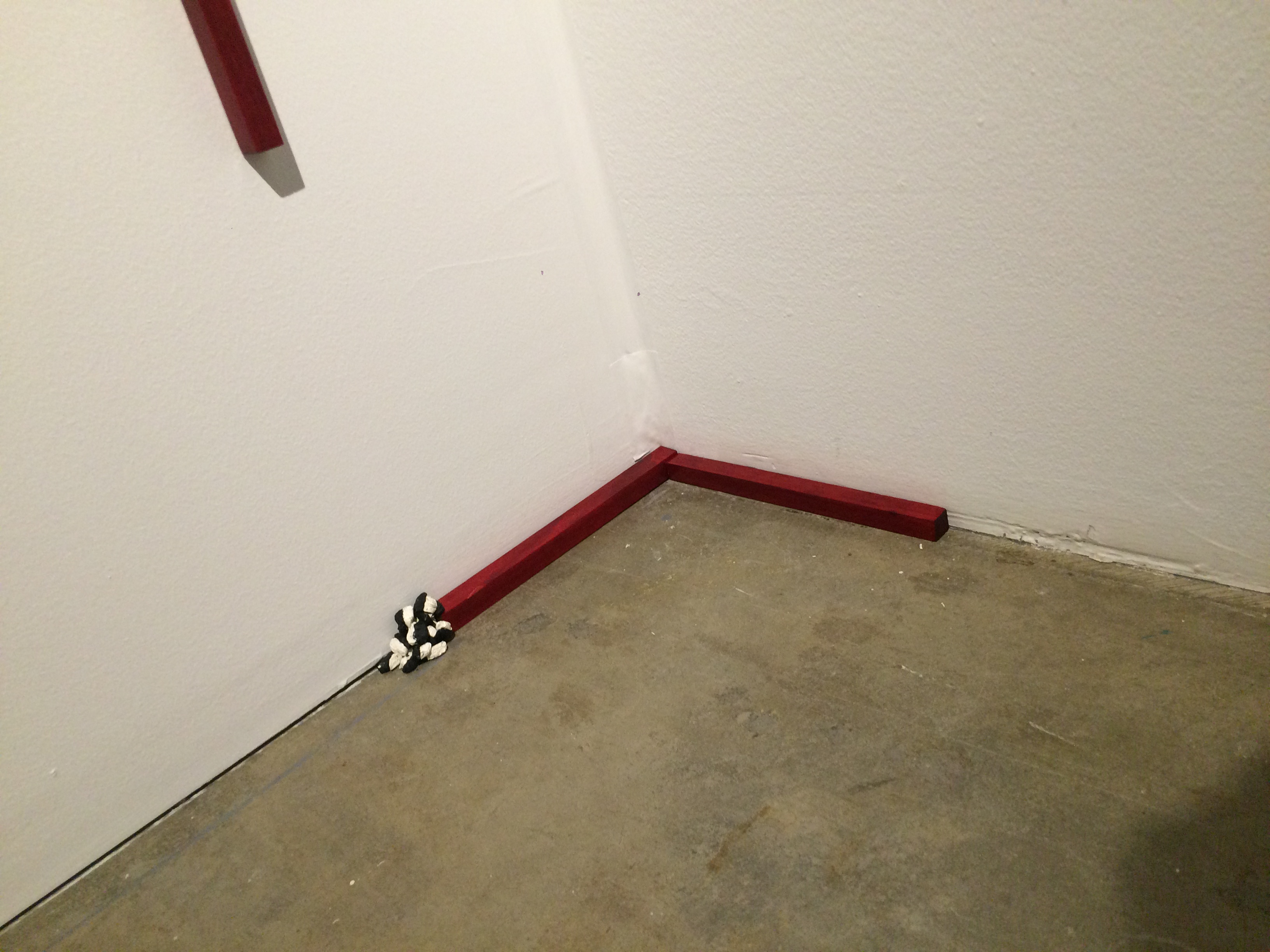 Classic Minimalism, in its reduction and proscription, has always struck me as monotheism in disguise. And its feminist co-option and reinterpretation has always felt like a witchy polytheistic version of the same authoritarian impulse to control people’s thoughts and lives. Spiritualism and religiosity in art make me nervous because, as the late great Christopher Hitchens wrote, and as my own life experience confirms, “religion poisons everything.” 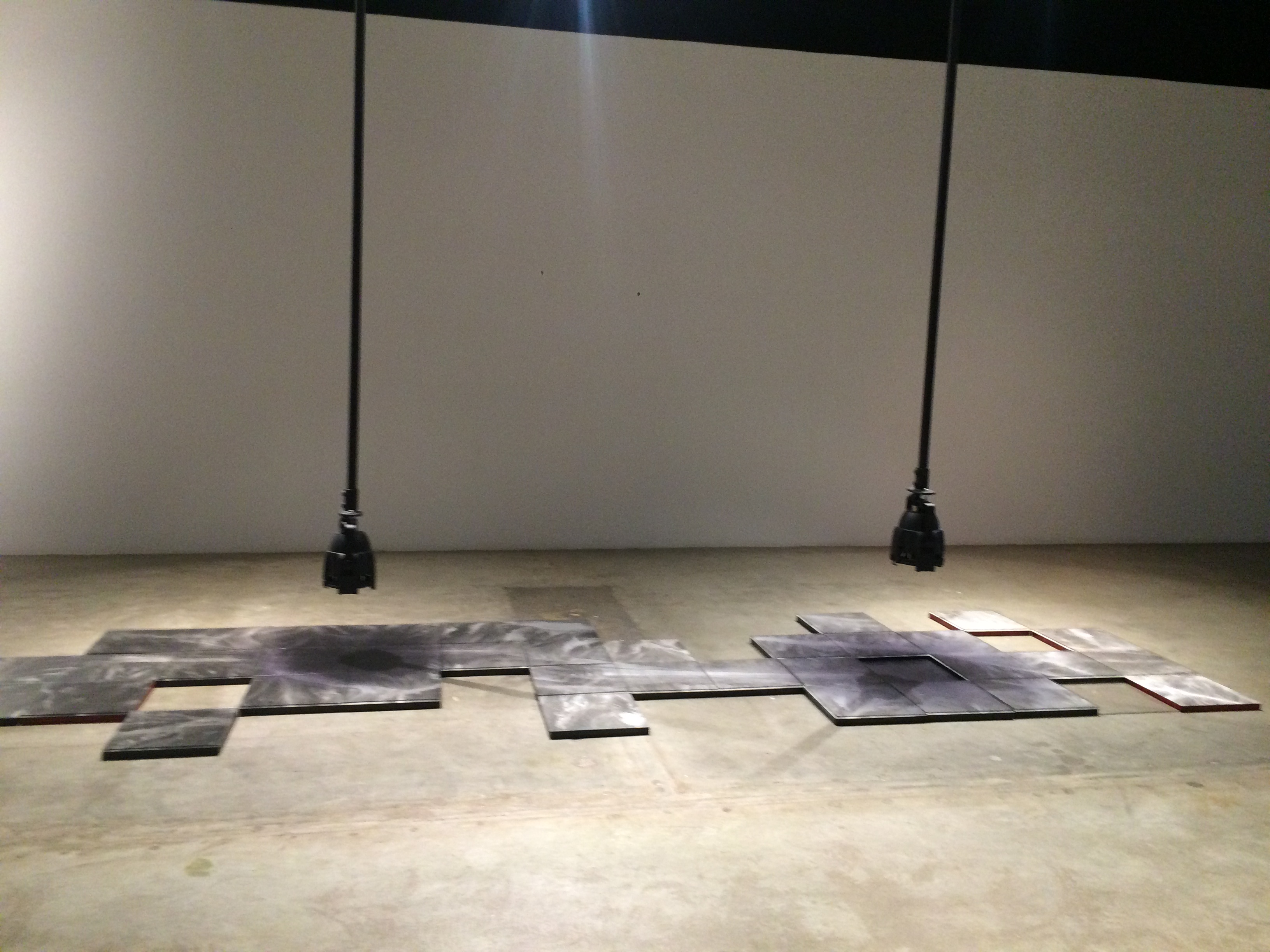 Before you encounter The Long Line however, you approach CODEX, a sculpture featuring an enlarged aerial photograph of ancient geoglyphs in southern Peru known as the Nazca Lines. The photograph is divided into one-foot squares and placed on the floor in the manner of Carl Andre. These squares are installed under specially coated glass that reacts to the UV lights overhead by turning dark. Like a techno-Stonehenge, the lights are timed to switch on and off about every 90 minutes, in accordance with the number of sunrises and sunsets seen from the International Space Station.

Archaeologists generally agree that the earthworks pictured in the tiles were created by the Nazca people for a combination of religious, astronomical and cosmological purposes. Apparently skeptical of carbon dating, MPA consulted the “UFO community” which believes that aliens created the Nazca Lines. After visiting the lines in Peru, MPA said she came away with a strong feeling of “energetic presence.” I don’t know what that means. It sounds New-Agey. I also don’t understand what aliens, the International Space Station or Carl Andre (whether he murdered his wife or not) have to do with colonial India or Africa. Mostly CODEX is an excuse to deploy technology for its own sake. 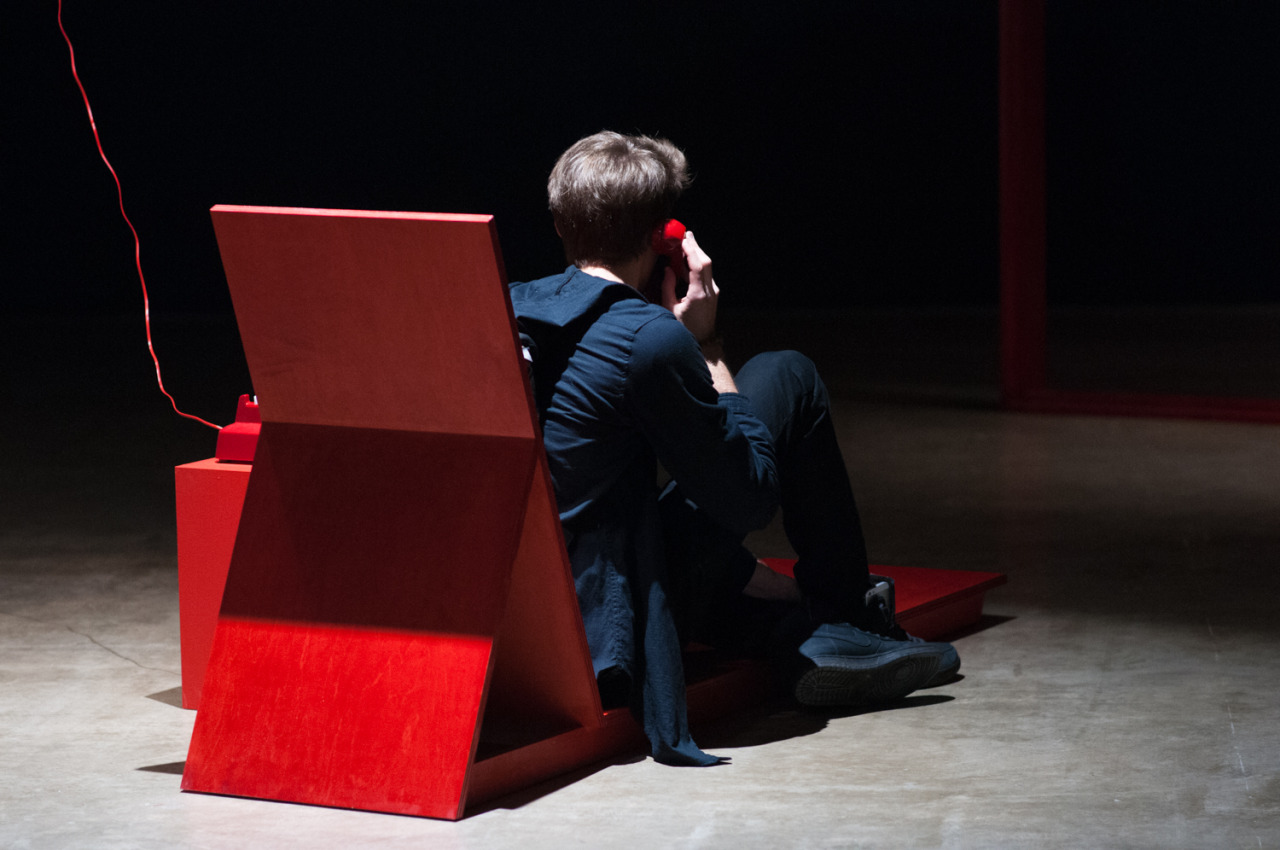 Walking along The Long Line the viewer arrives at The Interview, which might just as well be called Big Brother’s Church of Mars. The viewer is invited to sit down on a rigid, red pew, stare through a red wooden frame into a red photograph of Mars starkly illuminated against a black wall. The viewer—who has now been turned into an art medium—is asked to pick up a red phone and consent to be interviewed by a disembodied voice about their fears and hopes for the future of human life on Mars. The parallels between Catholic confession, planet worship and tapped phone calls on red phones make me wonder how much contemporary art has abandoned reason and rationality.

I try not to turn myself into human capital unless I’m getting paid, so I rarely participate in interactive art. But since my job is to write a review, I thought perhaps I might submit myself to this weird confessional experience, until I was persuaded to abstain by the practical thought that the people who participate in this “collaboration” are probably being recorded for an archive.

But I did listen to several visitors submit to the grilling. One middle-aged lady who was enthusiastically in the midst of reading Ayn Rand’s Atlas Shrugged suggested that Mars might be used as a colony for scientists and artists. Brilliant. While I do anticipate intellectual detention camps one of these days, I confess I never made the imaginative leap of envisioning myself in orange scrubs on Mars. 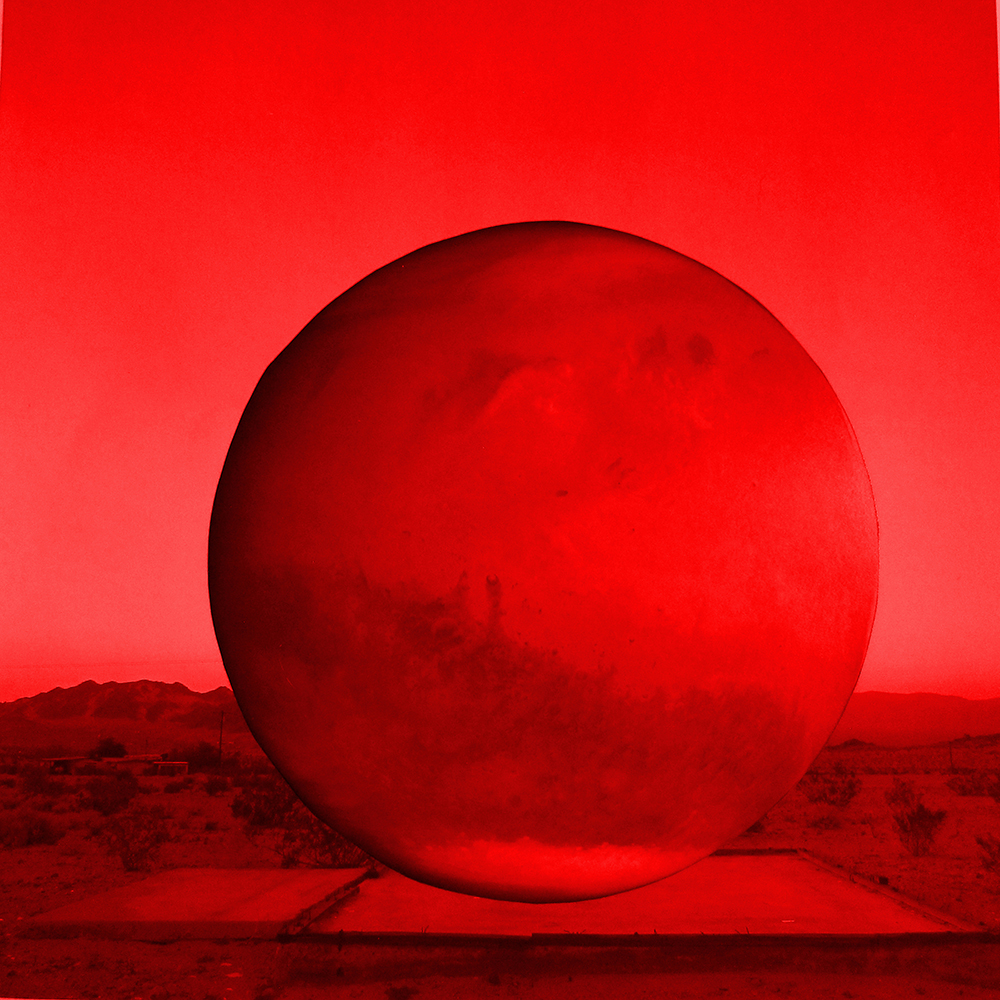 Again referring to the wall text (as we must do in exhibitions such as these) we find that Daderko and MPA ask us to consider the “possibilities for the co-existence of rational and mythical beliefs.” Rationality is not belief. Rationalists must always be prepared to change their viewpoint based on evidence. Rationality and mythical belief cannot co-exist, because while humans may not know much, we do know that myths are not true.

Let’s take a final moment to contemplate how far into Neverland so many young leftist artists have drifted. The old-school, escaped-from-the-Holocaust-Left-Wing-Frankfurt radicals must all be kvetching in their graves. Theodor Adorno wrote a hilarious and frightening little book called The Stars Down to Earth, an entertaining deconstruction of the ways in which the attitudes and behaviors inculcated by horoscopic advice and planetary worship clog the intellectual arteries in the parts of our brains needed to discern whether or not we’re living in slavery. Unfortunately Daderko and MPA obfuscate rather than clarify our reality.

Through June 5 at CAMH.