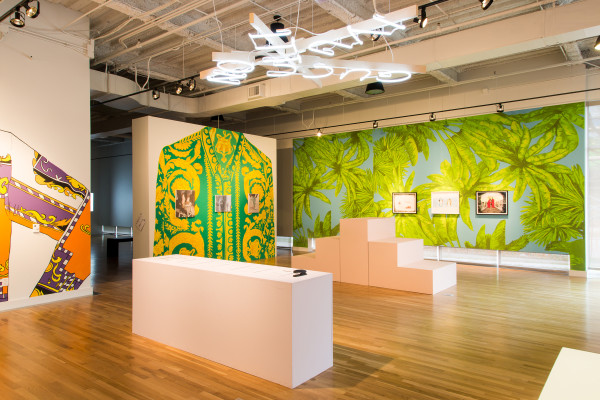 Installation view of What Shall We Do Next? Photo: Lynn Lane

DiverseWorks’ current show, What Shall We Do Next?, is designed to make a statement. In one fell swoop, this exhibition uses the gallery’s recent move to its new space as an attempt to address the organization’s main challenge: simply get people through the door. The exhibition’s design, a collaboration between Miami-based artist collective Versace Versace Versace and DiverseWorks’ curator Rachel Cook, is primed to do just that. Towering, impressive Baroque murals, visible from the outside, line the walls of the gallery in an attempt to pull the visitor into the space. Once inside, custom-built furniture entices you to stay for a while, giving you a place to put your feet up and lounge. And once the visitor has fallen into the trap of the clever exhibition itself, they realize the show sells exactly what it criticizes: the impact of advertising and technology on our physical bodies and our perceptions of spaces. 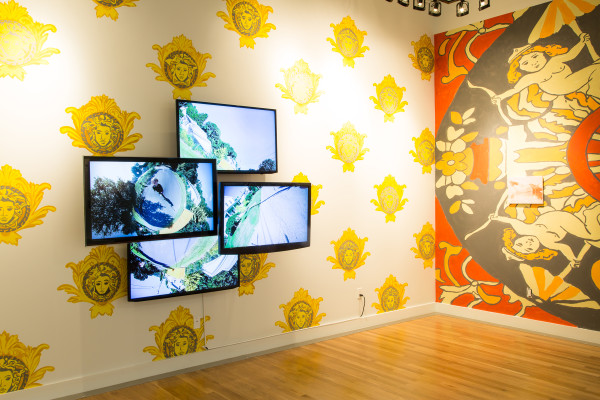 The exhibition opens with a four-channel video by Kristin Lucas. Situated across for a bleacher-style seating arrangement, the video plays simultaneously on a collage of televisions mounted to the wall, each depicting a different camera angle of Lucas walking through an old residential neighborhood. Backed by an echoing, dreamlike monologue of non-sequitur statements that talk about staying connected, Lucas’ Go-Pro-like cameras track her every step, creating a virtual reality-esque, in-the-round portrait of her movements. 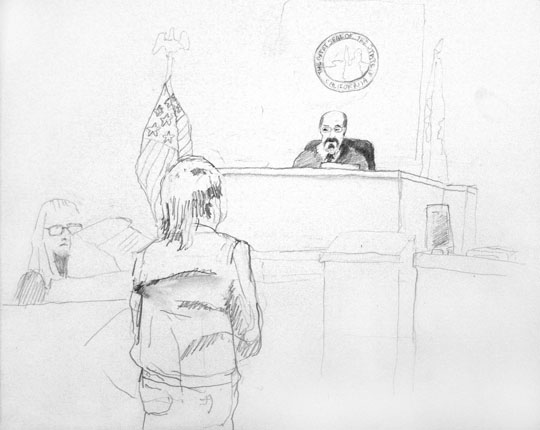 Her other piece in the show, Refresh, stays within this theme of self-reflection. Formatted as a takeaway zine, Refresh documents the court proceedings of Lucas’ 2007 name change in which she appeared before the Superior Court of California to change her name from Kristin Sue Lucas to Kristin Sue Lucas. In this work, Lucas does something that is exceedingly hard to do well—she makes art about the internet without using visual references to the internet. Artists like Hito Steyerl and Josh Reames make art about the internet by referencing the visual style so prevalent on the web. Lucas’s performance, however, thinks like the internet does. She expresses a pure desire for renewal, for a clean slate, even if it means erasing a previous version of herself. She creates a new login, a new username, and forgets her password; there is no thought towards self-preservation, no archiving that is done beforehand. It’s a clean break. 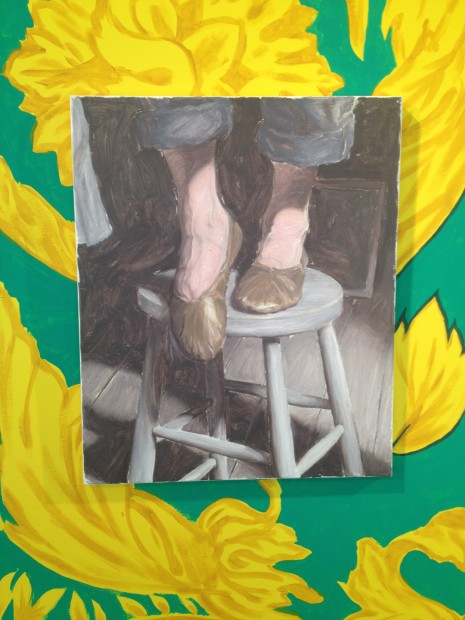 Works by Danielle Dean and Versace Versace Versace dominate the middle of the exhibition. Upon closer inspection, VVV’s wall murals don’t seem up to snuff. While impressive from a distance, up close they are streaky and a little sloppy. This, whether intentional or not, fits with the show. From a distance the murals are the advertisement—a lush, beautifully crafted Big Mac, and on closer inspection they’re a let down, a shoddily put together sandwich that’s missing half of its toppings. Works by Dean and two of VVV’s members, Loriel Beltran and Aramis Gutierrez, are hung atop the murals, highlighting their (dis)functionality as nothing more than space-eating decoration. Dean’s drawings serve as studies for other pieces in the show, depicting fantastical landscapes and video sets that reference a Nike branded shoe. Beltran’s paintings abstract and reappropriate porn centerfold spreads, and Gutierrez’s highlight un-idealized feminine features, such as the veiny feet of a ballet dancer. 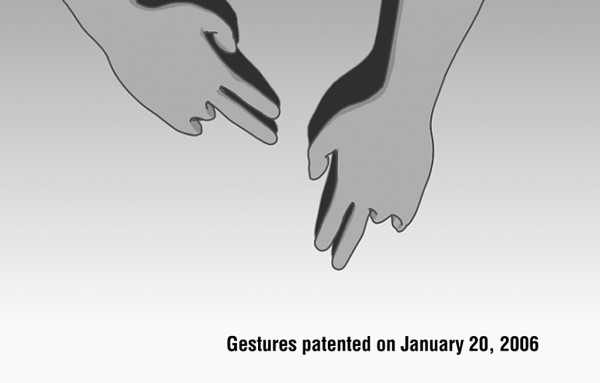 Still from Julien Prévieux’s What Shall We Do Next?

The back portion of DW has been turned into a screening room. The gallery houses two videos by Paris-based artist Julien Prévieux and one by Dean. Prévieux’s video What Shall We Do Next? is by far the strongest piece in the show. Consisting of animated hands, the work demonstrates gestures that were patented from 2006 to 2011. The video begins tracing these gesticulations from when expanded technologies were quite literally just at our fingertips: the iPhone came out in 2007 and the first Android phone came out in 2008. Reasons for the gestures, however, are left out of the video, and there is no contextual information for what the gestures are used for, or what individual or company patented them. In this vagueness, the motions become ritualistic, symbolic of an alternative reality that they both connect to and detached from. They are so nuanced that the same gesture seems to appear again and again. (Unfortunately, Prévieux and Dean’s other works in the room detract somewhat from What Shall We Do Next? The video’s quiet contemplativeness is broken by the noise pollution present in the space. Still, What Shall We Do Next? stands out.)

In its new space, DiverseWorks is off to a solid start. This first show brought in interesting national and international artists, while still capitalizing on local talent (Dean is a MFAH Core resident and Lucas is a professor at UT). Add to that DiverseWorks’ access to a black-box theater space in the same complex, and I’d say they have great potential to put on some serious and thought-provoking shows.