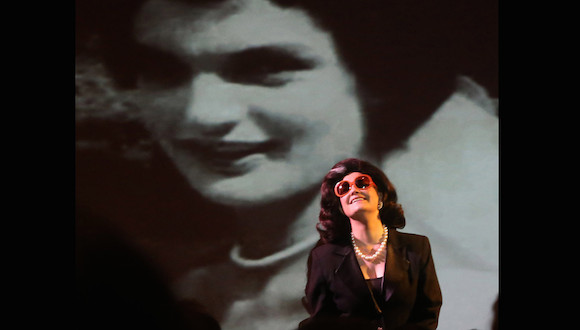 Karen Finley doubles down on her title as “First Lady of performance art” in her piece The Jackie Look, which she’s bringing to Dallas’ Kessler Theater this April. The work, performed most recently at The Broad in Los Angeles (see a review of the performance here), involves Finley playing the role of Jacqueline Kennedy Onassis to examine our culture’s fascination with images of trauma. The Jackie Look was first performed in 2010 and has evolved with the cultural zeitgeist—the Broad performance, for example, included references to the November 2015 Paris attacks.

Finley is known for her provocative work. She was part of the infamous NEA Four controversy in 1990, in which she and three other artists had their NEA grants revoked due to ‘indecency.’ The conflict was a major cause of the NEA’s decision to stop funding individual artists.

In 2013, Finley returned to Houston’s DiverseWorks to re-perform excerpts from We Keep Our Victims Ready, the performance that caused the NEA backlash. The Jackie Look will premiere at the Kessler Theater on April 1st at 8 p.m. Tickets start at $25 and can be found here.

Video: Parliament of Owls at DiverseWorks