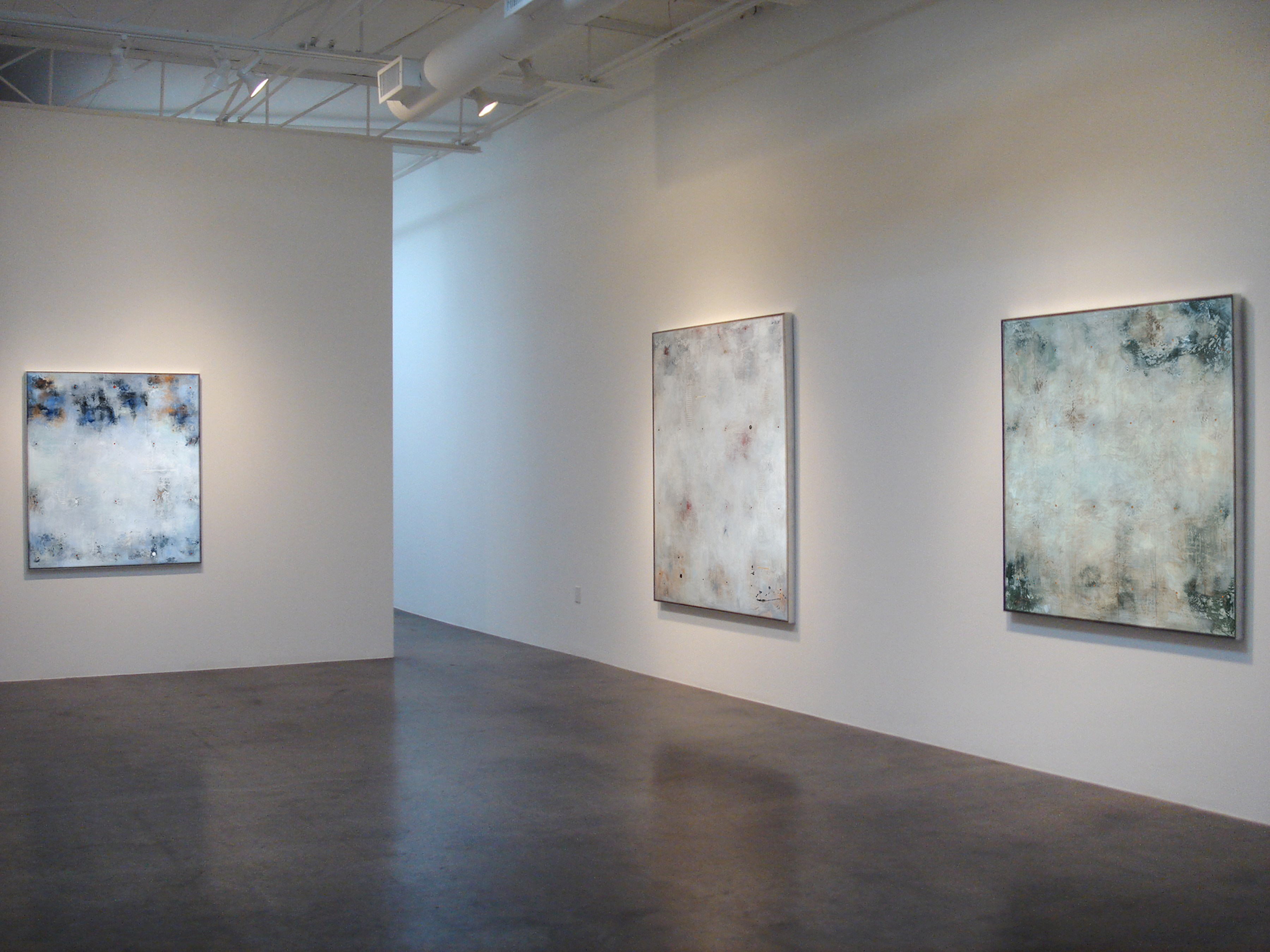 The paintings’ materials listed in Raphaëlle Goethals’ exhibition checklist are wax, resin and pigments on birch panels. That’s the recipe for traditional encaustic painting: pigment, beeswax and Damar resin. And Goethals works the medium for all it’s worth in this show in which the surfaces suggest atmospheric effects and invite certain contemplative and emotional associations.

Dust Stories (Grey) is a smallish work where grays (I’ll spell that word like an American here) fade from warm yellow to aqua to almost violet. The yellow gray perhaps recalls Eliot’s “yellow fog that rubs its back upon the window-panes.” Such an ethereal flavor harkens back to the northern European sublime of Caspar David Friedrich, or Turner. It’s a Romanticism for the 21st century—a Romanticism after Rothko’s suicide, as it were.

Softly visible beneath the painting’s translucent wax surface lie traces of rectilinear structure—like sheets of paper collaged to the underpainting. Edges appear as subdued lines and color shifts. That foggy yellow abuts a dimly cool gray passage along a straight line. Along the left side, two tall narrow rectangles bear ripples of lighter gray caused by tiny variations in the thickness of the painting medium. Near the bottom a casual X of dotted lines sinks into the paint. As with other works in the show, a grid of quarter-inch dots anchors the surface and asserts the very front of the atmospheric space while pushing the rest back. 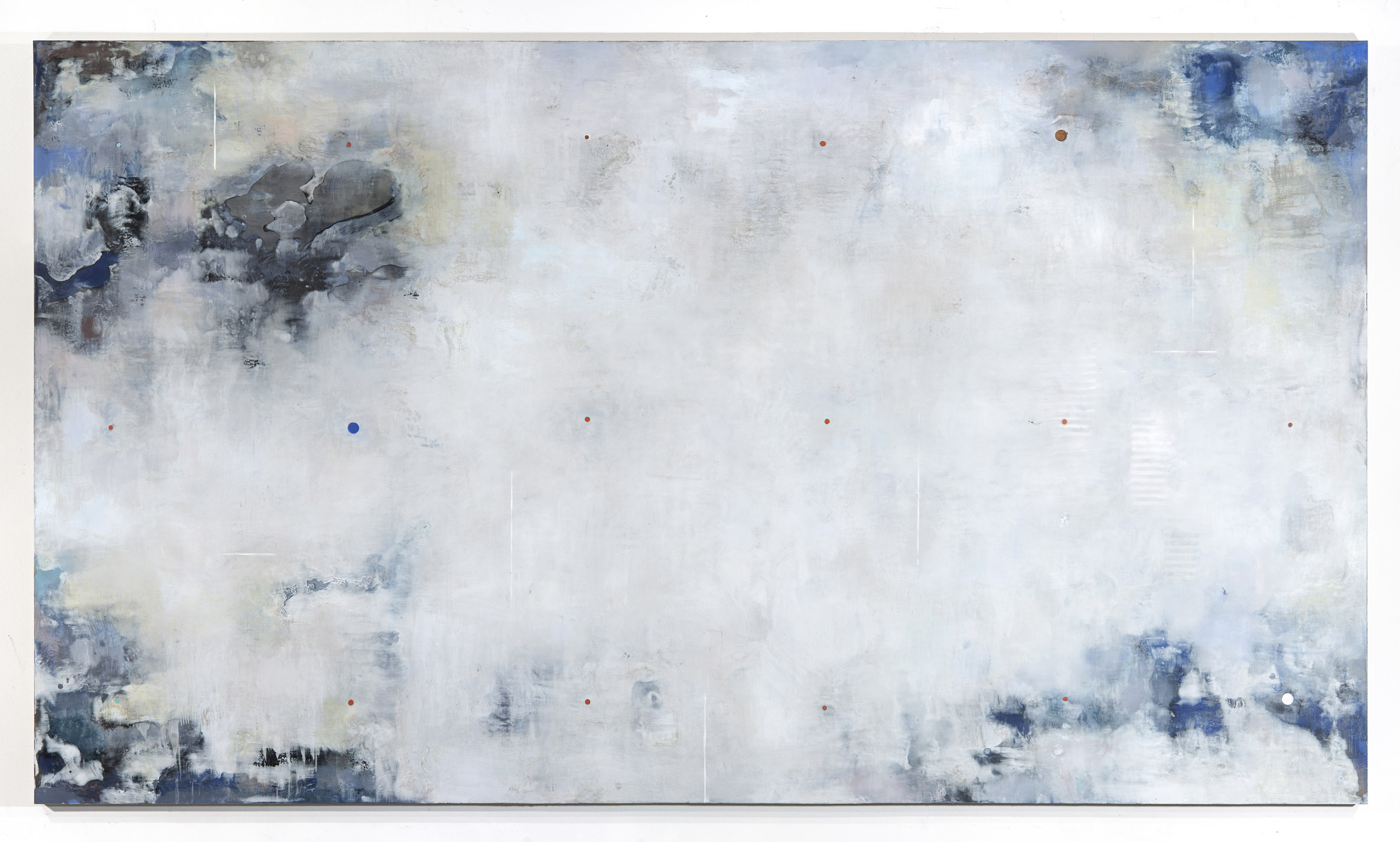 The larger Fragments comprises a wider range of pictorial incident, with darker blues and gray greens in the panel’s corners. Edges again appear as though incised into an undercoat, with imperfectly vertical lines and tiny meanders. Again, a grid of dots floats before the implied space, this time in complementary burnt orange. The effect is not really like early an Larry Poons painting, but play of multiple spaces in a mark-and-picture-plane dance is certainly there. The darker passages recede into an illusory depth. 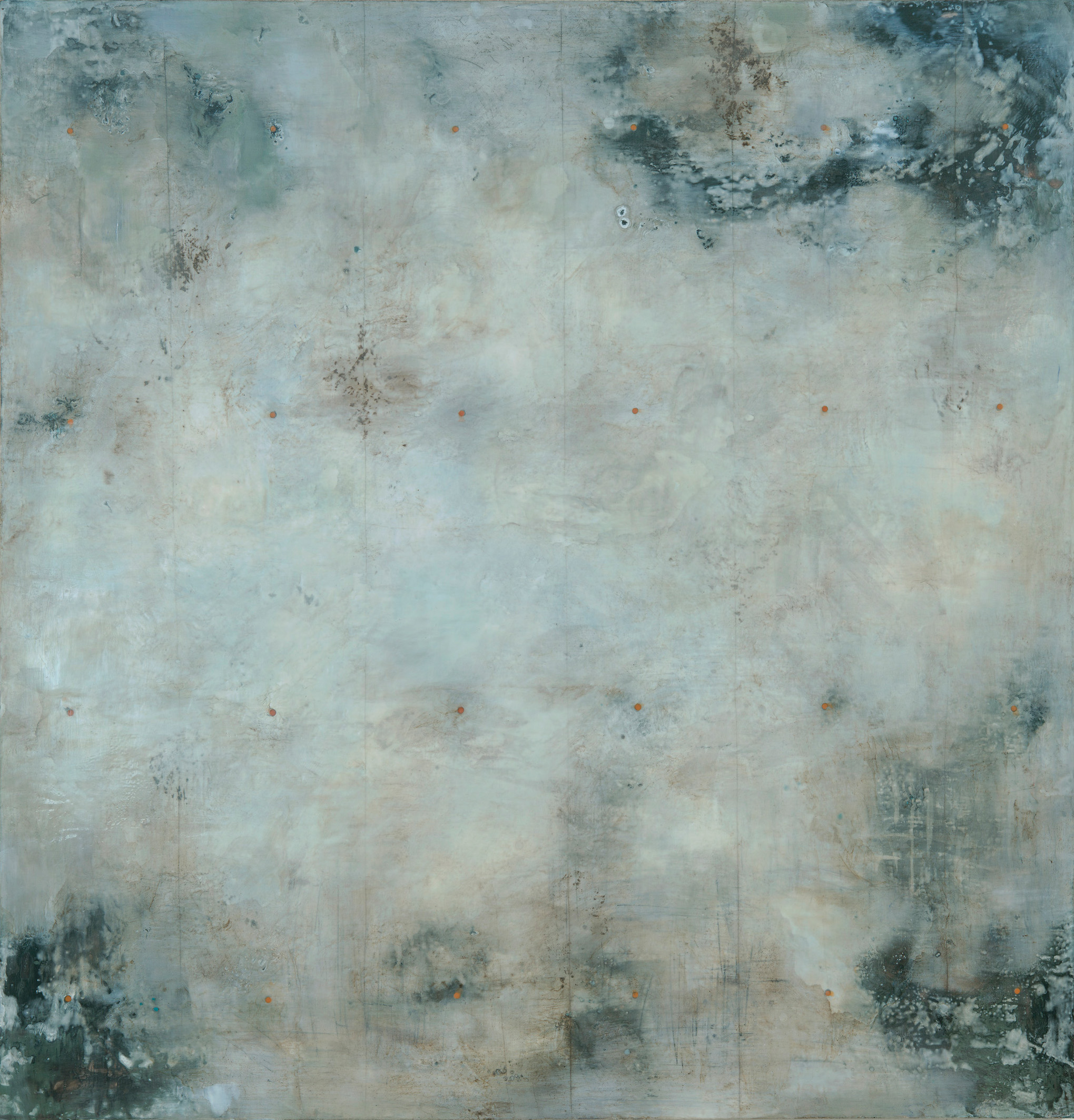 The actual material of these paintings is certainly layered, but it is not laid on thickly at all. Any depth one sees is painted, not actual. One gallery visitor remarked that it was like looking through stained ice to what lay below. 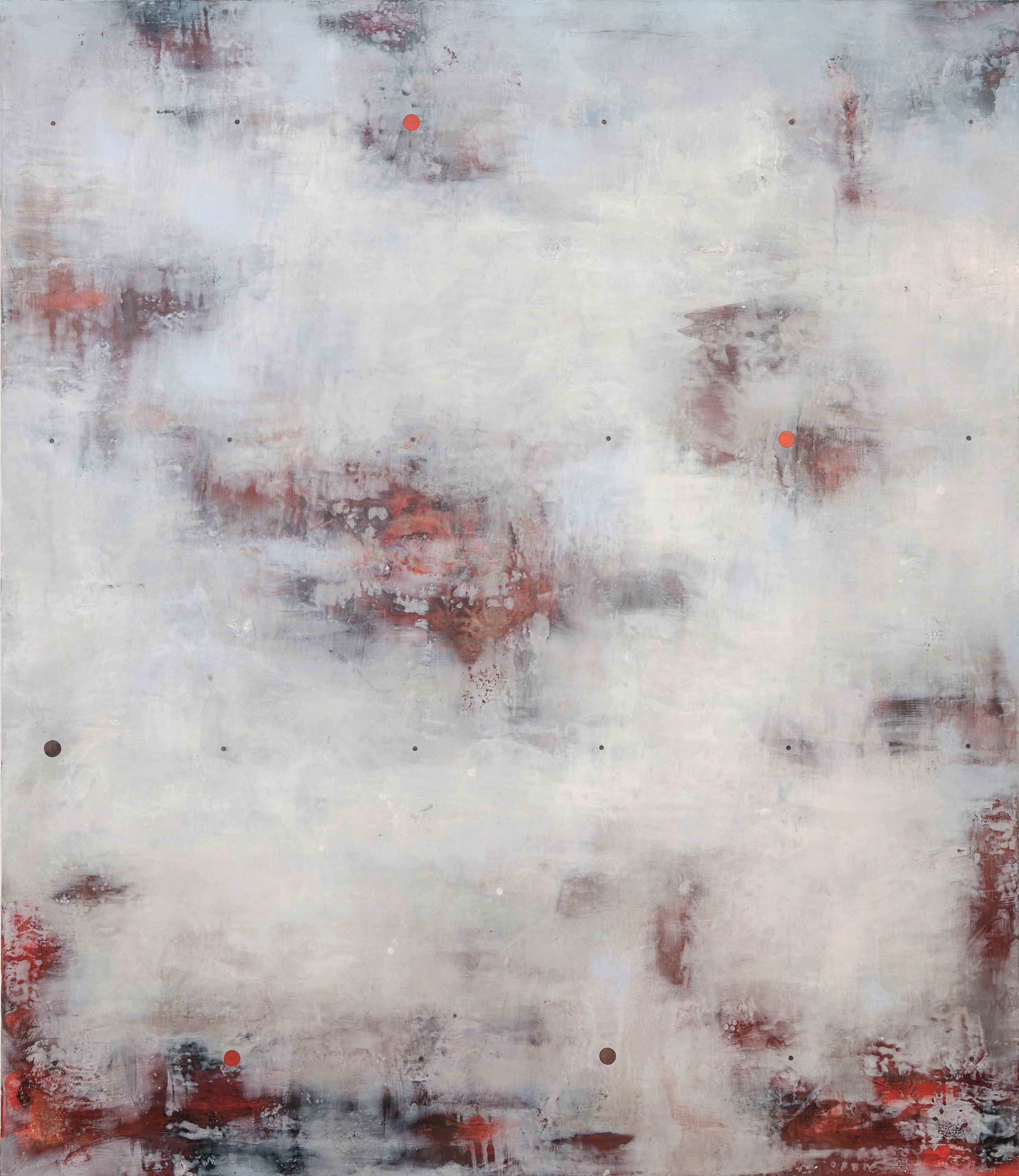 I can’t resist thoughts of spiritual abstraction: Rothko, say, or westerner Clyfford Still (Goethals is a resident of New Mexico). Or Stiegliz’s “equivalents”: there is a cloud-like cast to many of the paintings. Desert light and sky of her home. One painting is titled is Sky’s Falling, and it does offer areas of sunset red behind a nimbus of pale grays. In that painting, the grid of dots gets what appears to be an impulsive variation: in five instances, the mostly small, evenly spaced chocolate dots inflate to about an inch in diameter. Three of them turn orange according to no pattern I could determine. The spatial effect (grid in front, atmosphere behind) rocks up a bit because of the proportional shift.

The larger dots appear in other paintings as well. In a larger painting titled Dust Stories 1105, the cream-gray field is overlaid with a dot grid, the dots mostly about as big as a pencil eraser, but again the artist arrhythmically enlarges a few and lays on blue/orange complementaries slightly off register. An area of softly rendered parallel bands in the upper left of the panel appears to emerge from the surface, like a scar or a boot print. The skin of the paint begins to take on an emotional cast.

And that scar-like subdued pattern whispers from beneath the skins of other paintings in the show. Meditative and slow to unfold these paintings may be, but I think the romantic rhetoric I succumbed to above may be a dead end, or at least too limited a response to these paintings. Skin seems a richer metaphor: a sensual surface, inviting touch, suffering injury. They are not utterly flat: small ripples punctuate the panels here and there like more scars, wrinkles, and blemishes on a body that has endured a measure of living on this Earth. 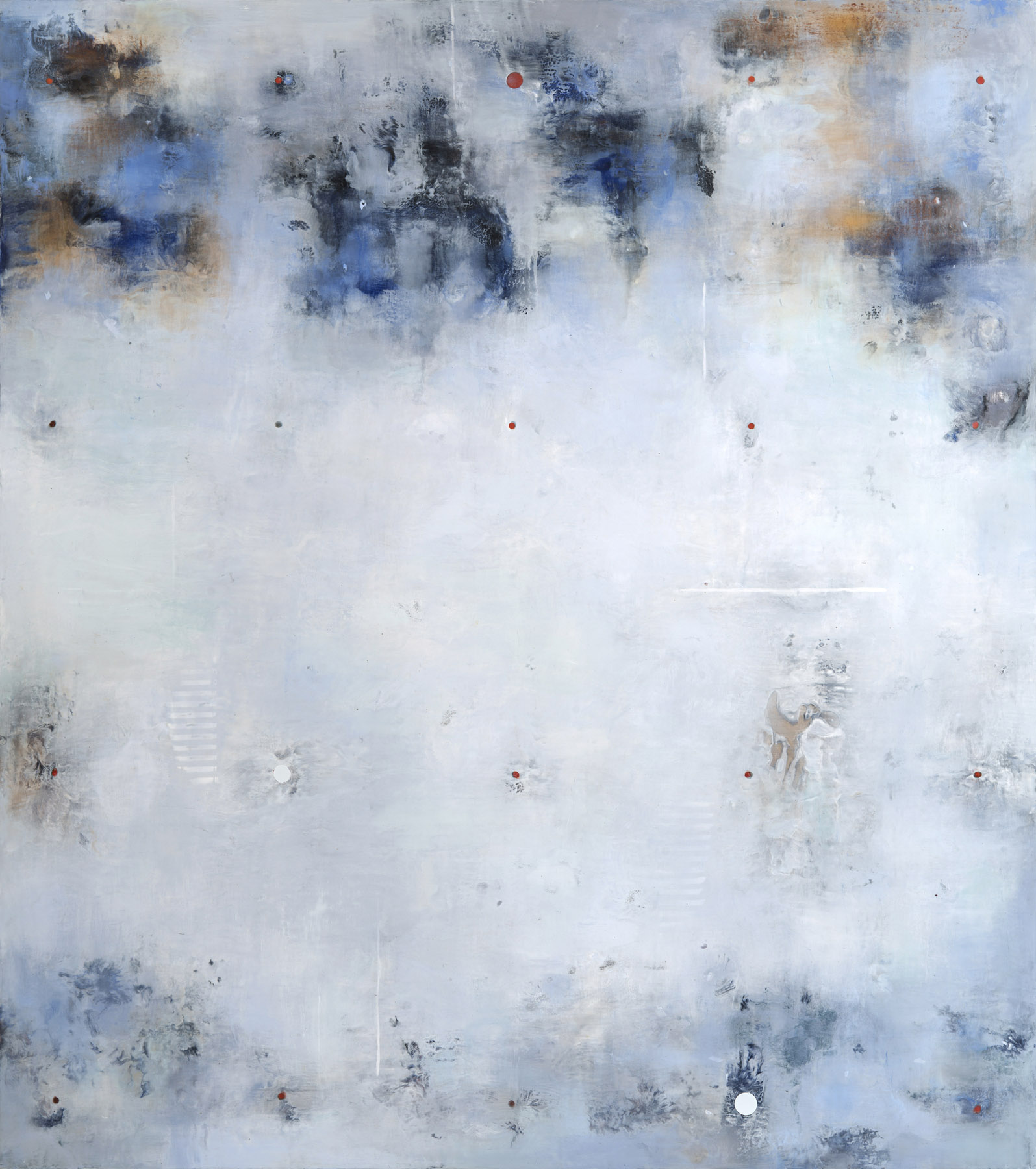 I don’t believe that conceptually shifting from skies to bodies undoes the idea of a meditative aesthetic. I can contemplate the spirit in the corporeal. Eliot seems to say as much when he writes in The Love Song of J. Alfred Prufrock: ”When the evening is spread out against the sky/Like a patient etherized upon a table.” A celestial observation is made bodily, morbidly material.

When Ludwig Wittgenstein wrote “The human body is the best picture of the human soul” in his Philosophical Investigations, he was simply observing the ways we understand our fellow humans and the ways we let them understand us. We look at each other.

The spirit is in the flesh. Being in a skin is how we be.