Recently I was complaining to a curator about a museum in Texas that rarely shows Texas artists. The curator replied, “Why do they have to show Texas artists?”

The reasons for showing local art aren’t obvious. Even the term “local art” conjures sad images of street fairs where “artists” sell their unfortunate paintings and rooster sculptures alongside handmade soaps and wind chimes, and talk about the creative life they’re living in the Hill Country. These people may be lovely human beings, but they’re not artists.

Rare as it is, there is such a thing as great local art. But while some Texas institutions are getting better at showing it (notably the CAMH), there’s little glamour in it for them: for one, it’s not going to put a feather in any curator’s hat who’s looking to move up to fancier pastures. It doesn’t necessarily fire up the patrons or the board, either—if they haven’t seen the stuff in New York or Miami or Venice, what’s the point? 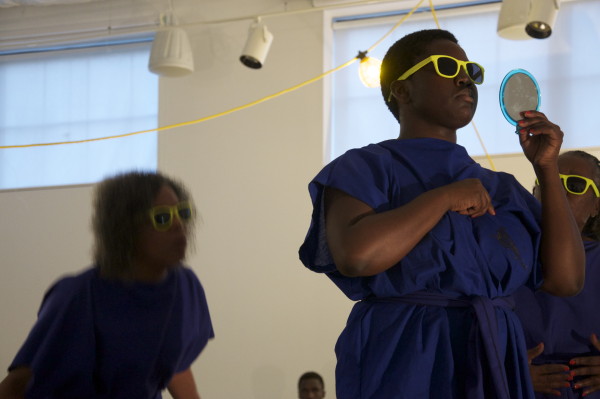 Performance still from “Wall” by Autumn Knight in 2015 at the Contemporary Arts Museum Houston. Courtesy of the artist and the Galveston Artist Residency.

Part of this is natural: we’re hardwired to notice and appreciate the exotic, and overlook the familiar. Most collectors will see a painting at a Texas gallery differently than they’ll see the same painting in a booth at the Frieze Art Fair. Maybe the director of that booth at Frieze is onto something that they missed? They’re not completely sure (contemporary art being the fickle and faddish thing that it is), so they need to trust certain indicators of quality, and location is a good place to start. (It’s also way more fun to tell your friends you got a painting at Frieze than at a local gallery, which is one of the reasons why the gallery system as we’ve known it for decades will probably be unrecognizable 10 to 20 years from now.) 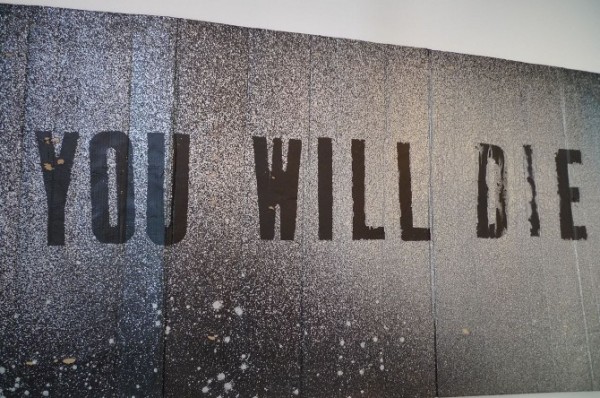 The CAMH’s exhibition of Mark Flood opens this April 29th.

I’m not suggesting that most of the art being made in Texas is good. A solid 80% of Texas art is crap. You have to be choosy. But having a worthwhile art scene doesn’t just mean institutions that show famous names. It also means having artists nearby who live in the same world you live in, and who look at that world and make interesting work about it. Which means you have to trust that the place you live is interesting enough to inspire art that’s worthwhile. Nobody realized debris that washed up in Captiva was interesting until Robert Rauschenberg started doing his thing. Nobody realized cans of soup could be interesting until Warhol.

Which leads me to the Galveston Arts Center.

For the past 20 years, Clint Willour has been the curator at the Galveston Arts Center and he’s pursued a program of exclusively showing Texas artists. It’s not always sexy, but it’s important. It’s important to give serious consideration—clean, thoughtful shows that travel, often with catalogs—to artists who have deliberately resisted the centrifugal forces of the art world and chosen to live in Texas. It’s important because of that 20% of the work here that is good, and that won’t necessarily be shown in other institutions.

These days in Galveston “The Hurricane” means Hurricane Ike, of 2008—as opposed to the Alicia of my childhood or the Carla of my parents’ youth (or of course The Big One, in 1900, which is still the deadliest natural disaster in American history). Ike had wind, of course, but what wrought the most damage was the storm surge, over 12’ high in places. The water flowed over Galveston from the bay side, inundating the old section of downtown, which unfortunately included an 1878 bank building with soaring ceilings, home of the Galveston Arts Center. They had a show up of Helen Altman’s work at the time. The water rose ten feet up the walls. The building was crippled, with extensive masonry damage to the brick pier foundation. Altman’s work was destroyed.

Fast forward seven-plus years, and the story of the GAC’s reopening is one of tremendous grit and perseverance by many people, and of generosity by many funders, including a deux ex machina, 11th-hour $1 million gift from the Moody Foundation. I visited the gutted building in 2012, and again this week, to see how the phoenix rose from the ashes. It looks great. Here are some before-and-after pictures. 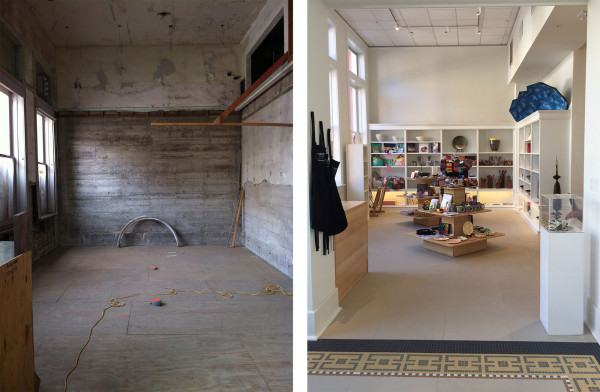 The GAC shop. The tile floor is a replica of the building’s original entryway. 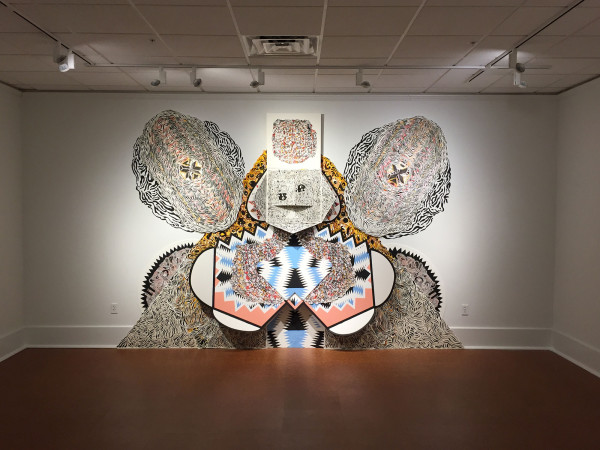 Natasha Bowdoin’s work is on view in an upstairs gallery. New lighting has been installed throughout the building.

Willour is retiring this summer, and with him will go an encyclopedic knowledge of Texas artists. Hopefully the GAC can find another curator who appreciates the sumpy, seedy, remote charms of Galveston, and who shares Willour’s vision for finding excellence in unlikely places. The Galveston Arts Center is not at the center of the Texas art world, much less the national one. But good stuff is everywhere. You have to look. You have to look.