Sebastien “Mr. D” Boileau, a French-American artist who established Eyeful Art Murals and Designs in 1998, is responsible for a number of huge murals throughout downtown and midtown Houston. Perhaps best-known for “the biggest mural in Houston” (God as graffiti artist a la Sistine Chapel ceiling), there is also a giant gator and a big gorilla, among many other murals scattered throughout town.

Now, Texas Direct Auto has asked him to paint an entire building across the street from the Toyota Center. In a TV interview yesterday, Boileau showed a number of shots of him and his team working on the project. He explained the theme: “Houston is known as Space City, so it’s a space theme with a twist.” 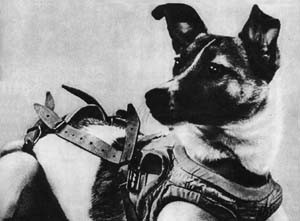 “Laika (Soviet dog).” Licensed under Fair use via Wikipedia.

It’s big, colorful, playful, and sure to be an eye-catcher for Rockets fans searching for parking spots. But that side of the building makes it difficult not to think of Laika, the Soviet dog sent into space in 1957’s Sputnik 2 with no plans for her return.

I’m hoping to like the completed piece more than I like the screen grab but I’m not going to hold my breath.