I have no idea what political and economic forces converged to cause The National Gallery, The Centraal Museum, Utrecht, the Sarah Campbell Blaffer Foundation and The Museum of Fine Arts, Houston to put cash on the table to bring Pleasure and Piety: The Art of Joachim Wtewael to H-Town. Whatever those causes are, the exhibition itself is at least worthwhile in its ability to help us realize how unsatisfying to the soul competent painting can be.

The MFAH’s press release claims that this exhibition allows Wtewael to take his place among the best of the Dutch Golden Age is pretty funny and totally untrue. Although he continued painting well into the 17th century and the first part of the Netherlands’ ascension to the greatest European power, Wtewael remained a Dutch proponent of an Italian Mannerism, and unluckily sandwiched historically between the sharp wit and subtle brush of Pieter Brueghel the Elder and the heartbreaking humanity of Rembrandt.

A friend and I have a theory that all artists, even now, basically split along the Northern and Italian Renaissance divide: poop, sweat and death versus transsexual, classicized aliens who lounge around with overfed putti getting drunk. Even as a student I always sensed that the Northern guys made paintings about Jesus because they had to and the Italians made them because they wanted to. The Germans and the Dutch did art a huge favor by radically secularizing religious content in painting on the back of the Protestant Reformation. Frans Hals was a Realist in style and subject two hundred years before Courbet and Balzac. 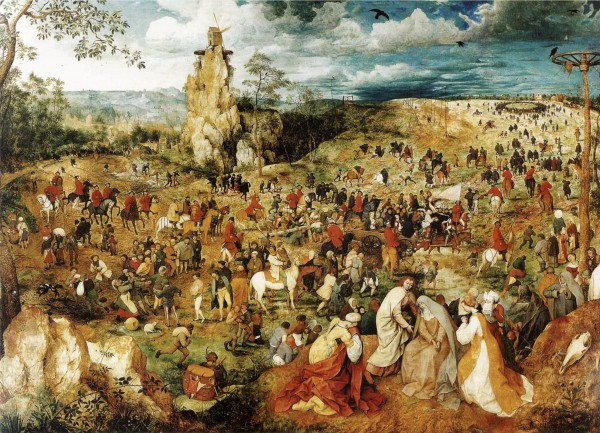 Pieter Brueghel the Elder, The Procession to Calvary, 1564

The Northern pictures generally stand up as representations of human behavior with or without the religious or mythological allegory. In Breughel’s Procession To Calvary it doesn’t seem to matter all that much if it’s Jesus or Johann getting nailed up that day—good times either way for everyone but the family of the accused. Similarly, in Brueghel’s hands, the dramatic fall of the mythological Icarus is a funny and very minor event in a picture focused primarily on a farmer tilling his hillside soil overlooking a busy port. The Germans were even more heavy metal than the Dutch. Holbein’s rotting Christ doesn’t look like he’ll be resurrecting himself or anyone else anytime soon. 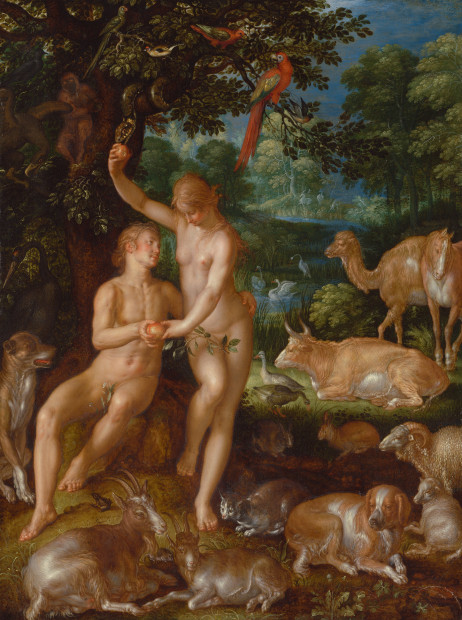 Like many Northern Mannerists, Wtewael exists awkwardly between these two worldviews. For him, everyone seems to have gout including Andromeda, and who knew God gave Adam and Eve a domesticated lap dog in their School of Fontainebleau garden? Sometimes his (or his patron’s) Calvinism collides hilariously with his attachment to Michelangelo’s lumpy, bodybuilders-gone-to-seed fantasy world. In his depiction of the incestuous Biblical tale of Lot and his Daughters Wtewael manages to be both chaste and “rapey” by delicately concealing the daughters’ pudenda under a gossamer shred of fabric while their dad, surrounded by blocks of stinky cheese, cops a feel of a plump little boob. Ted Cruz would probably approve. 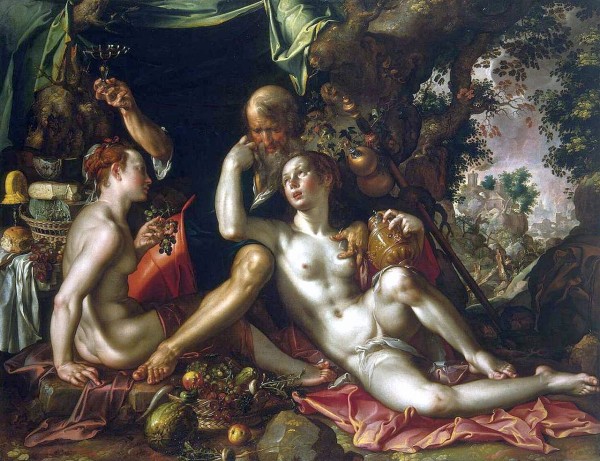 Joachim Wtewael, Lot and His Daughters, 1600

If some of this sounds entertaining, it is. And the exhibition is free, installed in the museum’s permanent Renaissance galleries so it’s worth a visit. I also can’t say the show isn’t timely. The title, Pleasure and Piety, has particular relevance in early 21st century America. Wtewael’s thin glaze of prudish morality over a body of work that is basically about fucking, food, money and war is also pretty familiar for Americans who live in a culture that shutters abortion clinics and turns teenage girls into pop-culture fuck dolls. The Dutch Golden Age was also a time of art fairs and a booming market. It’s estimated that 1.3 million pictures were painted in the 20 years after 1640. That’s probably 1.297 million pictures too many.

All the handwringing (including my own) over so-called Zombie Formalism is nothing new.  Wtewael brought technical competency to the hollowed-out husk of High Renaissance Italian Idealism and dressed it down with bits and pieces of gouty Northern pragmatism. We seem to live in Mannerist times again. Maybe we always do. Mannerism these days consists of the stylish shell of 20th century Abstraction produced under the sign of the Pop Art assembly line. In times like these let us turn to the wisdom of Bon Jovi, who opened the timeless anthem Wanted Dead or Alive with the words, “It’s all the same; only the names will change.”

I wasn’t rushing to see this show, but thank you for giving it more relevance and making me interested.