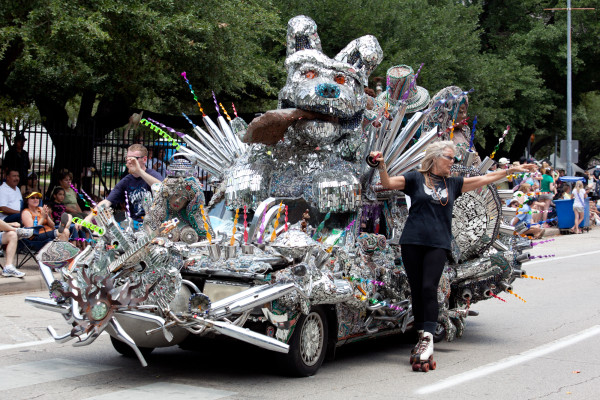 The Orange Show is now taking applications for Houston’s 29th annual Art Car Parade, which is set for April 9th. The entry fee is $35, and the parade does not turn anyone away! The deadline for applications is March 1st, so you have about a month and a half to turn that hunk of junk into a masterpiece.

The parade accepts vehicles in different categories, including decorated bicycles, slabs (so you can swang through the parade), and cars created by youth groups and schools. Other categories include:

The Art Car Parade was founded in 1988 by The Orange Show with support from the Houston International Festival. It grew out of the success of a parade organized by Rachel Hecker and Trish Herrera in 1986, in conjunction with the New Music America Festival which was held in Houston that year (and which included, among many other performances around the city, John Cage performing the in the MFAH’s Cullen Sculpture Garden). Today, the Art Car Parade attracts over 250 vehicles from across America, Canada and Mexico. It also brings a live audience of some 250,000 spectators.

Go here to see submission details for the parade.

Dalí Would Have Driven The Banana Car