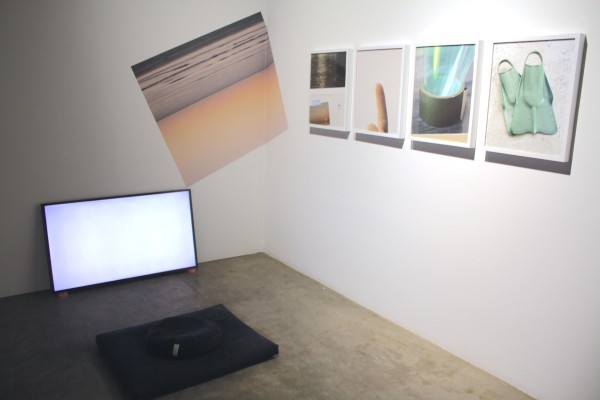 There’s a risk of corniness in centering an exhibition around a particular place. Yet the Contemporary Arts Museum Houston does so unabashedly in its current downstairs exhibition, Island Time: Galveston Artist Residency—The First Four Years. This isn’t totally on purpose, though; GAR by no means requires its artist residents to make work about Galveston, yet strangely, so much of this work echoes the beach town’s sentiments. Even more strangely, it works.

I imagine that as a resident it would be difficult not to make work about Galveston. It’s a swirling black hole of beauty and charm and repulsion. The water is gross, but the ships and barges lurking in the distance are always strangely beautiful. Pleasure Pier is garish and exciting. Galveston is a tourist town that has no shame—it relentlessly pawns its crappy trinkets, but it’s also filled with nuance and life, which is almost a secret except for those who take the time to look past its surface. It’s an unlikely LGBT mecca, with rainbow flags peppering the streets among biker bars and dives called The Poop Deck. The ghost tours, dilapidated architecture and lush Victorian homes reveal the palimpsest of a city decimated by hurricanes, combined with a determination to rebuild itself. It has Texas-sized strip clubs and Mardi Gras. In short: there’s a lot of material to mine. 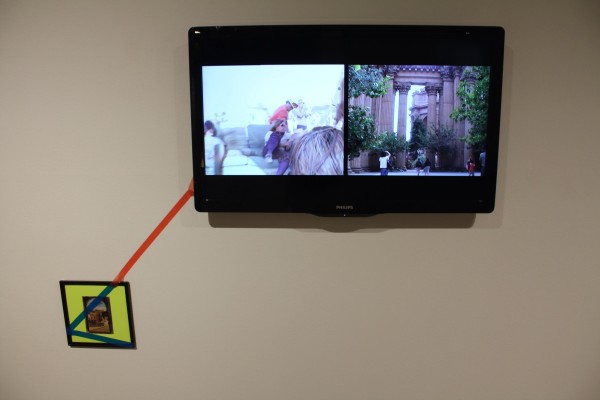 Not all of the work in the show directly relates to Galveston, or needs to. But what makes this show’s curation so strong is that even the work that doesn’t relate to Galveston indirectly feeds into this earnest, sincere exploration of such an odd and unassuming place. 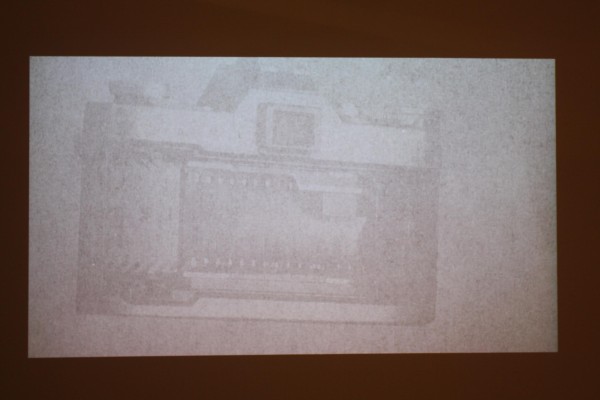 The first thing that hits you as you begin to descend the stairs is the droning cacophony emanating from Kelly Sears’ A tone halfway between light and darkness (2015), Joe Joe Orangias’ Spaceship Earth (2015), and Grace Ndiritu’s An Idealized History (2007). In a brilliant curatorial decision to have them permeate the space and commingle, it feels like a gay seance. But upon reaching the very bottom step, prepare to be deflated (annoyed) by William Powhida’s and Jade Townsend’s Map of NevADA Art Fair in New New Berlin (2014)—a drawing that comes off as snarky and short-sighted. Indeed, Island Time is at its best when it seriously and sincerely explores its landscape, and not when it off-handedly comments on it.

This is why the floor sculptures by Josh Bernstein, Orangias, and the hanging installation by Davide Savorani are the strongest works in the show: not because they are decisive, but because they are resolutely ambivalent, and because they read like constructed artifacts that resonate in a contemporary landscape yet simultaneously feel like monuments from decades ago—objects that we could plausibly chance upon at the beach, in the corner of an old restaurant, in the middle of a lonely park. 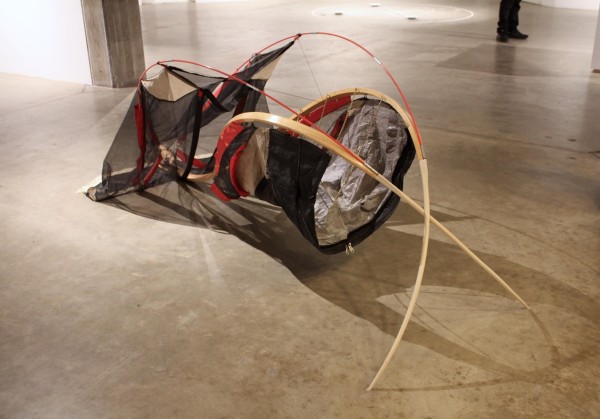 Nearest to the stairs is Bernstein’s Mosquito King (2013). It is elegant and male, its luscious curvature residing somewhere between furniture and a spine. And I think this is precisely what makes it feel both transitory and permanent; as the tent drapes and sags, the wood fuses into spindly tusks in a kind of domestic exoskeleton that looks as though it could take off walking at any moment. The backstory of Bernstein’s performance and research of Cabeza de Vaca feels negligible here; Mosquito King holds its own and tells its own story. 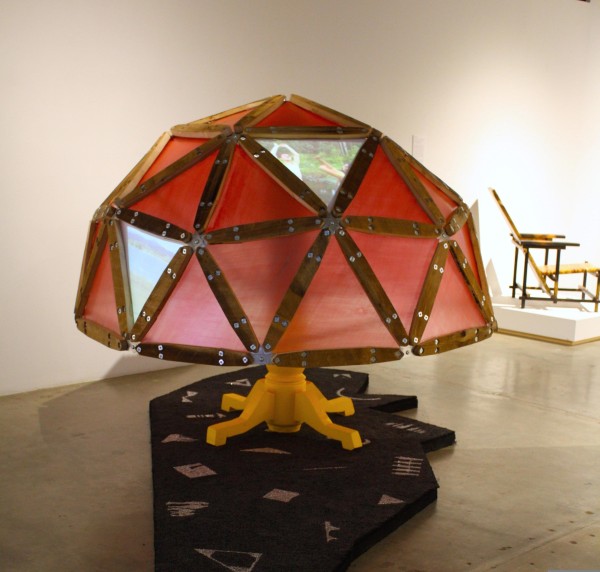 Further behind Mosquito King is Orangias’ and Leuli Eshragi’s Spaceship Earth, a glowing pink dome lamp hovering above an angular black peninsula. While made in 2015 after his residency at GAR, Spaceship Earth nevertheless expounds upon various projects Orangias explored while in Galveston, like creating sculptural maps of the island, and his Pink Dolphin Monument. Despite its title, Spaceship Earth doesn’t feel extraterrestrial: its intimate pink glow and enveloping canopy make it read as warm and embryonic. As video projections of unspecified male rituals loop on two panels, we can’t help but buy into Orangias’ contagious optimism; we want to believe in this model of a gay utopia. 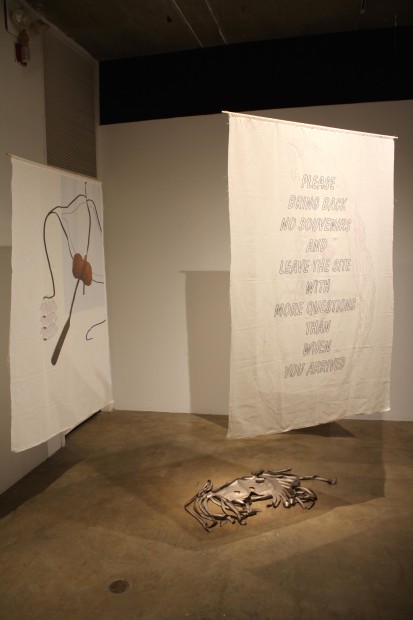 Diagonally across the gallery hangs Savorani’s installation comprising of four works deriving from his series Notes for a Stressed Environment. Like Orangias, Savorani made these in 2015 after the conclusion of his residency at GAR, and similarly to Orangias, many of the sentiments explored during his residency—namely that of frustration and isolation—crop up in his current work as well. Although, interestingly, the works drape and declare more of an ambivalence than outright cynicism. Untitled (No Souvenir) seems as curious about Galveston as it is exasperated by it; it’s as if Savorani hangs onto a belief that this place holds some kind of confounding knowledge to be unearthed. With Untitled (Stressed 27), are we to believe the oar up his ass leaves him stranded—a utilitarian object rendered useless? Or has he repurposed it for pleasure? And Untitled (Mask) ripples and writhes on the floor like a flayed, post-party octopus.

Island Time doesn’t take Galveston for granted. Like most of the work coming out of Galveston Artist Residency, it takes on and grapples with the subtle esoterica and blatant overtones that make the island what it is.