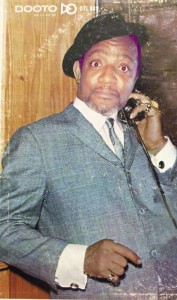 It’s official: ArtPrize Dallas is kaput for now, due to insufficient funding. Frank Artsmarter, the elusive figure behind the competing ArtSmarter Prize, claims responsibility for the demise of the Dallas offshoot of the Grand Rapids contest.

“I knew that my prize was gonna be huge,” Artsmarter said in a phone interview with Glasstire. “I’m polling really well with the all the media and all the religious groups in the world, and I just have more energy than those guys. Now that the Michigan folks have totally capitulated, as I knew they would, Dallas can finally get the prize it deserves. We will threaten the hell out of the status quo that was threatened by ArtPrize.”

Artsmarter’s prize includes approximately 27 artists (“a few more people want to join, so it may be a solid 30”), whose submissions will be unveiled at an event in Dallas during the Dallas Art Fair weekend next April. Stay tuned.

Newcomers Make Up Almost All of the ArtPrize...

A parody isn’t nearly as funny or effective if what you are lampooning doesn’t exist.

Hence the premature demise of the Dallas ArPrize.

There are plenty of other artists, venues and people in the Dallas/Fort Worth area and beyond, that would have appreciated an art collaborative effort of this magnitude that featured work by artists other than the recognizable approved assortment, presented through the same approved exhibit pipeline. If you consider what the Grand Rapids ArtPrize does for the creative community, the city and the people of Grand Rapids, for the two weeks the event runs, you would recognize the ArtPrize is bigger than showing art work. It allows people who might never go to an art museum (because they are too intimidated by it) or venture out to gallery night, or walk through an art fair, to actually be interested in engaging in this thing we call art. It energizes the public and allows them a comfortable alternative opportunity to experience what we do as artists. It’s a great chance for artists to share their work and their process with a broader audience like those who claim they can’t draw a stick figure or say, “I don’t really understand art!” You see it in their eyes when the light goes on and they say “Ohhhhh- I get it now.” It’s the connection that is transformative.

All the work in the ArtPrize event isn’t gallery worthy or high art or “contemporary”. It’s not meant to be, but a lot of it is truly outstanding and the likes you have never seen because it is rarely given a stage on which to perform. The ArtPrize offers a window of opportunity for lots of people especially kids to begin to touch or be touched by art. Art is meant to be experienced by a far wider range of participants than we typically consider in our practice – namely the public. We as creatives do ourselves and the rest of society a tremendous disservice when we think we are too cool to do work that normal people, families and kids can begin to engage with. So yes ArtPrize Dallas isn’t going to happen. Not because it wouldn’t work or that, “Dallas doesn’t need an ArtPrize” It’s not going to happen because we have forgotten that art isn’t just for an elite few. Or at least it shouldn’t be.

Clearly Peter Moskowitz didn’t enjoy, appreciate, or attempt to engage in the event itself (he only mentioned one work he saw and spoke to one artist) but had so much more to say about the politics behind the who what and where and his private jetting to and from some rancid place called Michigan. Typical New Yorker. His statement about the work, the artists involved and the overall relevance to “The Art World” is an ideal example of the contemptuous attitude that this elitist holds towards anything that falls below his high standards or possibly outside of New York City Limits. I don’t know- I’m just guessing.

He states “Despite the millions of dollars awarded over the last seven years, ArtPrize has hardly made a splash beyond Michigan state lines. It’s actually kind of a joke in much of the art world, where populism and a democratized aesthetic are often frowned upon. Sure, there’s some coastal snobbery contained within that criticism, but that doesn’t delegitimize the critique: ArtPrize, with few exceptions, has not produced artwork of note, has not launched careers or changed discourse. Its greatest achievement is that it has made a few lucky people who will never have success in the actual art world moderately rich and somewhat venerated for a few days each year.”

Wow- what a completely dismissive attitude that completely misses the point of something like The ArtPrize. Who knows- maybe Dallas could have added some legitimacy to something like the event. Nahhh- who am I kidding. It’s not cool enough to spend any energy on. We are wayyy better than Grand Rapids.

My very late video submission to the ArtSmarter Prize. I hope it will be considered.

now this is confusing…