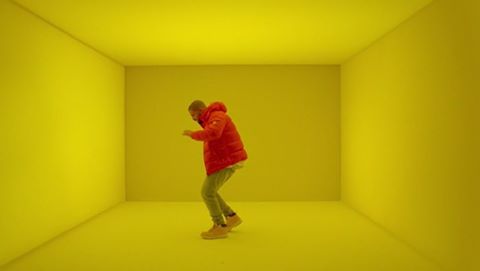 When Canadian rapper/singer/songwriter/actor Drake released the video for his latest single, “Hotline Bling” on Monday evening, social media went crazy. It was mostly about his less-than-professional dance moves that left most viewers declaring that Drake has proven that dorky is now sexy. Or, as music video director Director X explained the popularity of the video to Entertainment Weekly, “Real men dance.” (To accentuate the Dad dancing, someone set a clip of the video to the Charlie Brown theme song—watch it at the end of this post.) 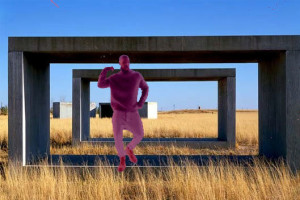 But what caught the attention of fans of contemporary art was his blatant rip-off of light installation artist James Turrell. This should come as no surprise to art-loving Drake fans because in his 2014 Rolling Stone profile, he stated: “I fuck with Turrell. He was a big influence on the visuals for my last tour.”

The Huffington Post even picked up on it and posted a number of stills reimagining the video as if Drake were a big fan of other artists, such as Donald Judd.

Turrell released a statement through his lawyer Donn Zaretsky (and writer for the Art Law Report). Zaretsky posted it yesterday in an article entitled “What a Time to Be Alive.”

“While I am truly flattered to learn that Drake f*cks with me, I nevertheless wish to make clear that neither I nor any of my woes was involved in any way in the making of the Hotline Bling video.”

Zaretsky may have helped Turrell craft that sentence, but the response proves that Turrell is even cooler than we thought.