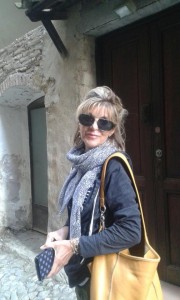 Meredith Francis Wilson died at the age of 58 on Monday, October 5th in Kerrville, Texas, after a 2 1/2 year battle with ovarian cancer.

Meredith spent most of her young adult life immersed in art history, both in Houston and Italy, and took a final trip to Italy earlier this year. She taught at the Houston High School for Performing and Visual Arts, and ultimately became the educational curator of the Contemporary Arts Museum Houston until 2001. Meredith was an avid collector of local contemporary art and leaves behind countless friends in Houston, Austin, Kansas City, and Kerrville. The fourth child in a close-knit family of ten children, she is survived by many relatives, including her three children, Camille Zarsky-­Jacobs, Bianca Vance, and Marcus Baloutine.

Memorial services will be held Saturday, October 24th from 1-3pm at the Southside Place Clubhouse, located at 3743 Garnet Street, Houston 77005. In lieu of flowers, memorial donations may be made in her name to the University of St. Thomas Art History department or the Peterson Hospice in Kerrville.

Meredith and I met in 1987 in Florence , Italy . Her sister Alison introduced us, who is married to one of my best friends. So we have been in each others lives for a while. A great friend and patron, always encouraging. I have never laughed as hard as with her. I will miss her dearly, her children and Siblings will miss her dearly. Love to you Meredith, Brooke

I’m incredibly saddened by this news. While we eventually lost touch after she moved to Austin around 2001, Meredith was, for me, one of those people we all need to meet at crucial points in our lives. In late 1996 when Meredith accepted me into the CAMH’s FAQTeam (the CAMH’s docent program — though I always liked to point out that we got paid), she did me, as the kids say, a solid. I have to believe that Meredith gave me a leg up into the Houston — and Texas — art world, opening doors (and some windows) that would easily have taken much longer to open, and in doing so, opening up opportunities I might never have had as quickly during my years in Houston. Even now I can hear her musical laughter and I remember with intense fondness the li’l touch of rebellious imp whose appearance that laughter always signaled. Thank you, Meredith, for everything and anything I ever neglected to thank you for. Rest in peace and love.