MASS Gallery in Austin has brought in some heavy hitters for its current exhibition, Mons Dew. The show consists of five artists, four based in New York as well as a staple Austinite, Andy Coolquitt. 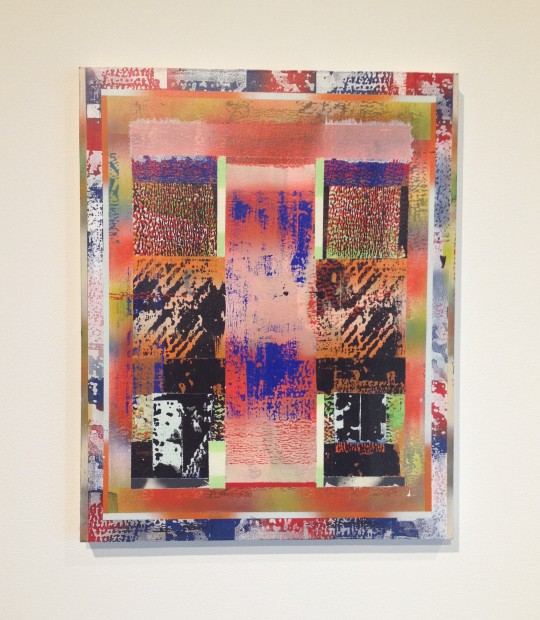 Though it’s a group show, the exhibition is arranged in sections designated to each individual artist. Works comingle in sight lines while each individual artist has his or her own space. Upon entry, the visitor is greeted by a salon-style hanging of works by Patrick Berran. The five pieces share a similar aesthetic, using acrylic and toner to create layered, abstract compositions. The paintings, all untitled and created this year, appear at first glance to address the tradition of painting. Their surfaces are hard-edged and taped-off, and there are gestural expressions through the transfers. But the more I examined them, the more they reminded me of computer glitches and messed-up screens. Looking like iPhones that have been dropped on the pavement one too many times, the paintings take on a techy glitchiness that points well past painting to a flawed digital world. 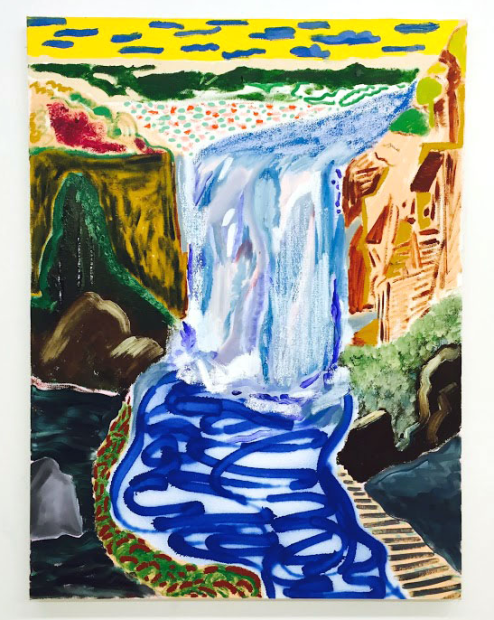 In the back room of the gallery are paintings by Shara Hughes and an installation by Austin veteran Andy Coolquitt. Hughes’ previous work contained abstracted, caricatured figures, but in these works she paints landscape environments populated with plant life. Her pieces feel fantastical and sublime while maintaining a banality that seems intentional.

Coolquitt’s installation consists of a number of works that are individual pieces. As his sculptures generally do when shown together, they seem to meld into one big “piece” that could at first glance be read as random items plucked from a garage sale. His sculptures work nicely with Hughes’ paintings for two reasons: 1) they share that flattened, banal delivery, and 2) their titles reflect similar thought processes. Both artists tend toward titles that are humorous or dismissive of their subjects; Hughes’ titles recall figural elements absent from her compositions, such as That Highschool Trip, as well as quippy one-offs like Yeah, But That’s Not Real. 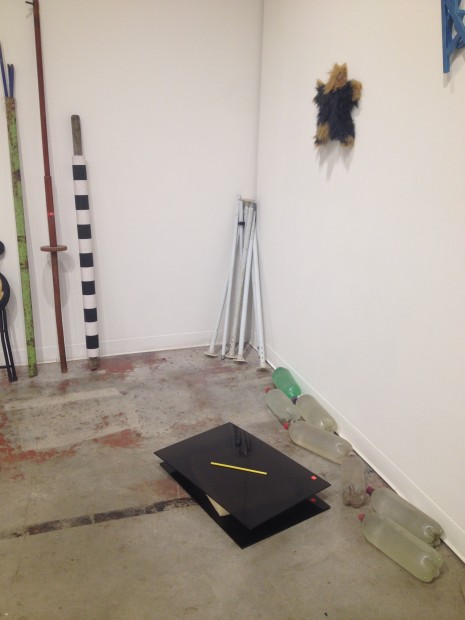 Coolquitt’s titles are all over the place. Some echo the way a piece physically looks, while others are somewhat awkward jokes (such as a black-and-white striped pole titled Michael Jackson). He references art history while making fun of both it and the art market with his $$4.00 Malevich, which consists of thrifted glass that still has bright orange price tags attached. This method of titling shared by Coolquitt and Hughes seems to come from a very young sensibility, which is more interesting once you realize the artists are nearly twenty years apart in age. 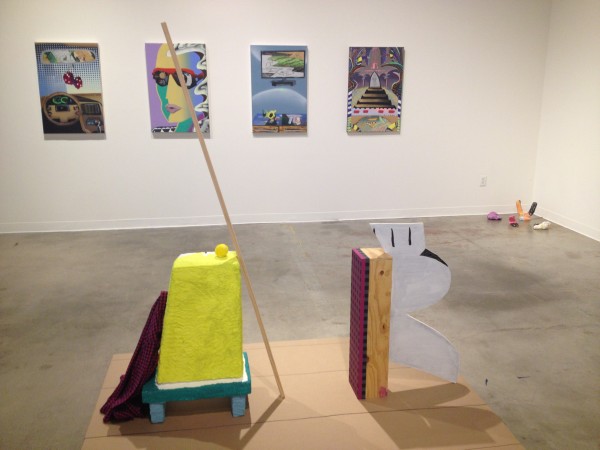 The front gallery space contains sculptures and assemblages by Stacy Fisher and paintings and a video work by Melissa Brown. Fisher’s pieces focus largely on their own materiality and the individual ways they’re constructed. This is further perpetuated by her title choices, such as Wall Work and Purple Sculpture with Wall and Lumber. Her largest piece is a sort of combine in the middle of the gallery space and evokes Coolquitt’s aesthetic in the way it’s constructed. A shirt hangs loosely on a yellow-green box that also supports a piece of wood; it looks like it would be a cinch to rearrange or knock over the structure. But because the forms and the surfaces of Fisher’s sculptures are more worked and altered than Coolquitt’s found objects, they feel more like traditional “art objects.”

My big takeaway from the show is the work by Melissa Brown. Her paintings are particularly striking in their graphic quality, but from a distance they have a somewhat mystical presence. They’re very processed based, and involve silkscreen, linocut, oil, acrylic, and more. And small portions of the paintings are covered in resin—mostly things in the paintings that are screen-like, like a rear-view mirror and sunglasses. The resin is covered by lottery scratch-off ink. Brown uses the ink as another surface and draws into it to create images within the screens. 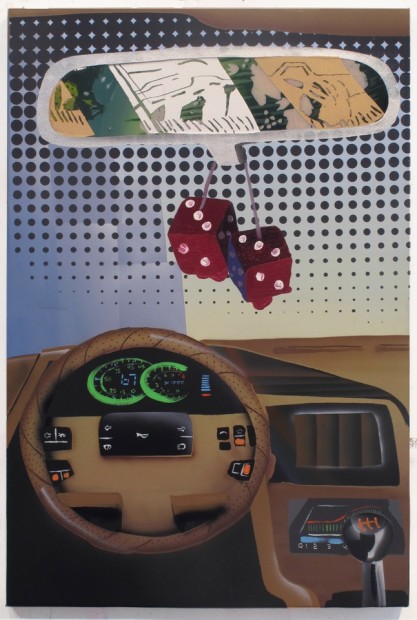 Brown’s paintings turn the quotidian into a surreal experience. Sometimes it’s done gradually, like in Dice & Dash (west side highway) where the car appears normal until you realize the dice seem to be slowly melting away and the Benday-dot-esque background begins to mess with your relationship to whatever is outside of the vehicle. Some other pieces are immediately fantastical, like Night Trip to the Temple, which creates a ceremonial entryway to a tomb-looking door that, for no evident reason, is inscribed with a heart.

Overall, the works in Mons Dew go well together. They encompass an increasingly popular aesthetic while retaining a sort of freshness. Brown’s pieces are the standouts in the show and, for me at least, share attributes with video works by Ed Atkins and Hito Steyerl. Go see them before they disappear back into the hip black hole of Brooklyn.

Mons Dew is on view at MASS Gallery in Austin through October 24.

austin hipster dumpster art. another reason there are like 15 artists who live there outside of UT art students. can’t be takin as anything more than inpired by 80’s pop culture, art in america and jorts. this work brings nothing new or challenging-constant celebration of the absurd

Jorts? Had to look it up. That is just unkind.
But funny.