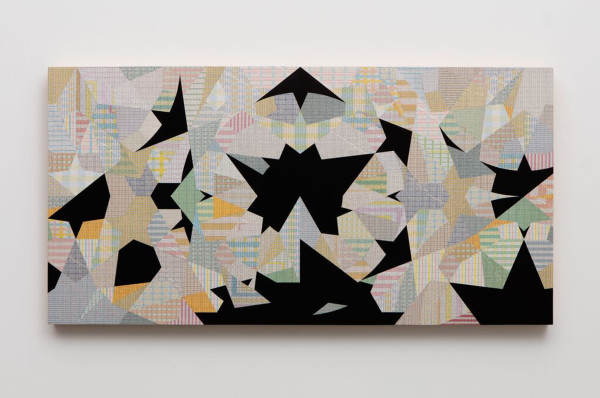 I saw Matthew Cusick’s show of tight, intricate collages at Holly Johnson Gallery last week and went back to see it again this week. Neither time, while in the gallery, did I pay more than cursory attention to the specifics of his source material, though some of it’s clear just through looking. But the artist takes pains to write out and provide long explanations for many of the works, and to make handy a complete bibliography of texts he uses for his research and as his raw physical material. I studied it all when I got home. Cusick’s bibliography for this show, in fact, consists of nearly 100 sources, listed alphabetically but ranging wildly from The Anatomy of Melancholy (Burton, Robert; both the 1927 and 1979 editions) to Homer’s The Odyssey. Also recent security envelopes and medical bills, almanacs and atlases. But of course most good artists pull from a multitude of sources, whether they tell us about them or not. 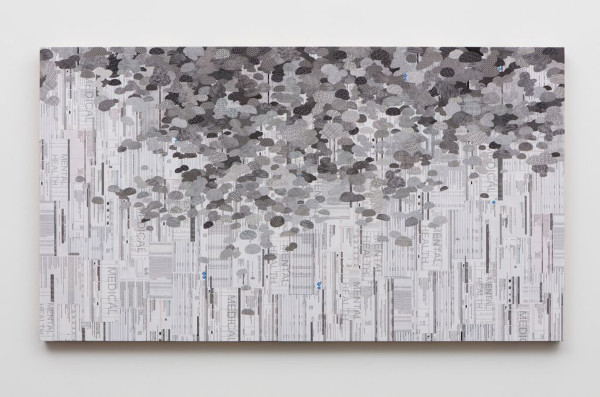 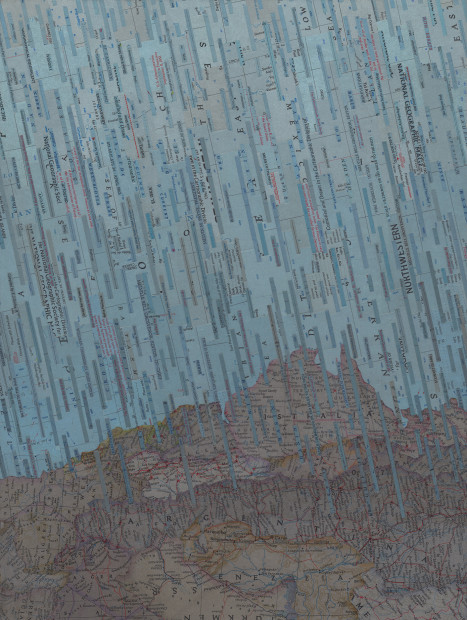 Cusick, like any good collagist, is an obsessive—not just visually and organizationally, but personally—and much of the work in this show is centered on some point of his combined rage, sense of betrayal, and a warning shot to anyone who cares to delve into it. The world’s geopolitics and military bloodlust that have played out over centuries (but really more specifically the clusterfuck that’s followed 9/11) have left him feeling raw, and he’s responded not by lashing out but rather diving deep. In the end, I don’t know if his emotional boil (and me learning about that through reading about it after seeing the work) helps to snap the already sharp collages into sharper focus, or if this information is simply an unnecessary add-on. 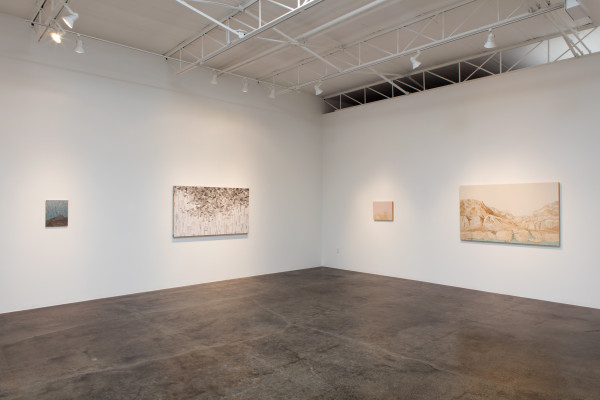 You wouldn’t know there’s anger in the work by walking into the space. The works look out at you with a kind of quiet precision that demands intimate attention. Even the colors (all cut from his listed materials) are muted; many of the texts he uses are older and faded. 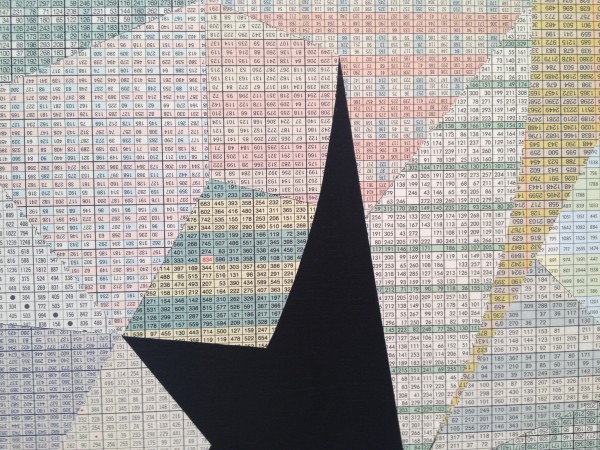 Detail of Rendition No. 2

His technique is wonderful, and varied, and that for me is the first and last appeal of his work: I lean in closer not because I need a primer on the clash of the three major Abrahamic religions, but because these collages look fantastic. Though in fact, the complexity (and time context) of the source material itself radiates out from the individual works in a subtle hum, and that, my friends, is where the art really is; his visuals are subtly infused with his message and the effect is reassuring, rather than jarring. I think he could ditch the bibliography and play-by-play altogether and let all his viewers internalize the work through the implicit rather than explicit. Enigma goes a long way in Cusick’s work (enough to get me back into the gallery a second time), and that’s an invaluable asset to an artist’s delivery. The X Factor, if you will. 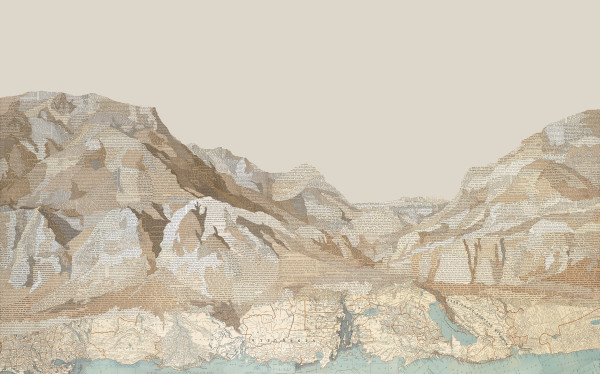 World Without End, 2015. Inlaid text, maps, and acrylic on panel.

In some of his works, the puzzle pieces of his collages are precisely razored out of (mostly) books and pieced together, edge to edge, like jeweled inlay. They are visually so satisfying to study up close that you get lost in them, and even if your mind is trained to read any legible lines of text, the pattern connections there are secondary to the works’ aesthetic impact. Still, each collage honors its own visual logic and dialect of joins, fusions, and overlaps. Some of the collages create abstract compositions akin to diamond-like kaleidoscope bursts, and some stick with the tradition of using collaged materials to create something figurative. In Cusick’s case, the more figurative creations evoke place: landscapes or even new maps of fictional histories (grounded in political history); I slightly prefer the abstract collages by measure of their being—again—less explicit. They feel both wiser and more beguiling, which is an interesting sweet spot to hit. 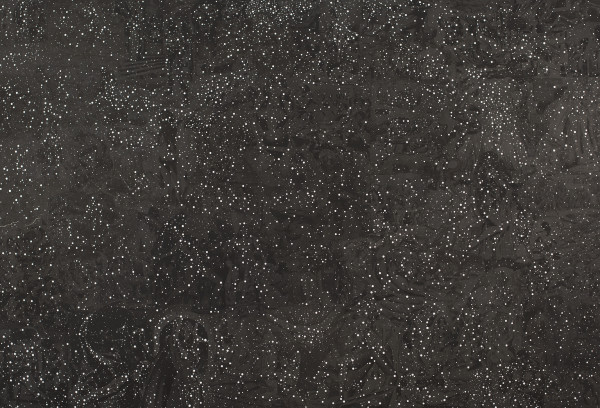 The best piece in the show is the least politically pedantic. It’s called Cimmeria and it’s a fluid, exploding collage of Conan the Barbarian comics washed over with velvety black sumi ink (the characters are just visible via their darkening contours and outlines) and the whole is shot through with countless points of light, creating a gorgeous, shimmering alternate-universe constellation. This night-sky galaxy is actually created with a tiny hole punch after the fact (there is a white underlay), though Cusick tricks your eye by touching the edges of some of the holes with a powdery halo of white, making it look like the stars are additions rather than subtractions. You absolutely cannot fully appreciate this piece, despite its size, from across a room. You have to encounter it within a few feet, or even inches. 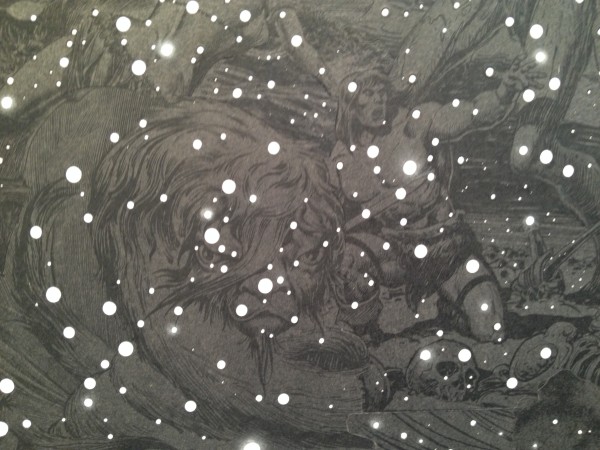 Which I’m very happy to do (I wish I could take it home) without a sheet of paper telling me exactly what it’s about. Although my notes didn’t come with a prescribed explanation of Cimmeria. Which is even better.

Matthew Cusick is at Holly Johnson Gallery, Dallas, through Nov. 14. Photography by Kevin Todora and Glasstire.