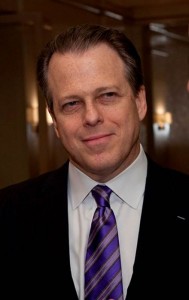 Anderson on his departure: “After nearly four years at the Dallas Museum of Art, I have decided to accept a compelling new opportunity at the New Cities Foundation, among the most innovative urban-focused enterprises in the world. It has been a great privilege to work alongside the Board and staff of the DMA, and to play a role in helping shape the Dallas Arts District Foundation as its chairman since 2013. My growing interest in how cultural districts can shape cities led me to this new, exciting opportunity in New York City.”

Anderson “played a key role in orchestrating” the 2014 New Cities Summit for the foundation, where he was formerly a trustee. In his new role, he will “help develop ways of supporting NCF’S focus on urban innovation, with a particular emphasis on how digital platforms can improve the lives of city dwellers internationally.” Anderson has had a soft spot for tech going back to his days as director of the Whitney Museum, where he oversaw the seminal 2001 show Bitstreams and the techy 2000 Biennial (the first Biennial catalog to include a CD-ROM of images from the show). More recently at the DMA, he’s launched a data mining initiative that trades free admission for visitors with capturing their personal details, in order to make a “personalized” museum experience. Not sure how well that’s working out: on my last visit, the guards seemed visibly crestfallen when I demurred from creating a personal profile at the iPad stations near the entrance.

So with this move, Anderson is apparently trading art for technology. As overheated as the art market’s been, there’s still more money in the latter. In Dallas, Walter Elcock, the President of the DMA’s Board of Trustees, will serve as the museum’s Interim President. Let the search speculation begin!