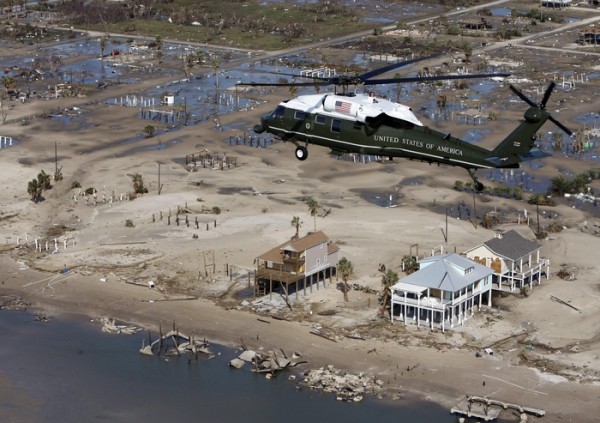 My summer ended this year with a trip to a new beach house on the Texan coast of the Bolivar Peninsula on Crystal Beach. My wife and I were invited to stay a few days in one of those precarious, spider-like houses that dot the beaches along the Gulf Coast, waiting for the next storm. Since our return I’ve wondered about the ways that the landscape of the Texas and Louisiana coast of the Gulf of Mexico shape the artistic values formed in Houston. In Houston we’re accustomed to a low hum of collective anxiety that buzzes loudly when the rain falls too heavy and the wind blows too hard. When I moved here a decade ago, people were trading stories about the destruction of Tropical Storm Allison. I experienced Ike, and spent eight hours trapped in a car with my wife, two cats, a dog and an open litter box while fleeing Rita, who never came.

Stories of storms are part of the culture of coastal people. But my stories and experiences were trivial weighed against the televised experience of watching New Orleans wash out to sea. I didn’t feel the full weight of the human disaster of Hurricane Katrina until years later and the gravity of it has only grown in my imagination since then. Artists who live along the poisoned waters of the Gulf of Mexico have developed a unique relationship with a landscape that demands the ability to live within the cognitive dissonance between idealism and nihilism. The special madness required to build a million-dollar house a few yards from the beach on a peninsula, wiped out eight years ago by the largest North Atlantic hurricane in history, collapses idealism and nihilism into absurdity.

We’re accustomed to a state of mind that ricochets between elation and terror. The awareness of our helplessness in the face of storms breeds certain types of artists who, knowing their city can be destroyed at any moment but remain out of necessity or desire, sublimate their existential uneasiness into artistic identities. The Gulf Coast artist’s physical environment is a topographic symbol of the psychological environment inhabited by many artists in this country. At the same time that an incredible proliferation of technological innovation offers us the hope that science may yet save us from ourselves, the arts and humanities in public schools and universities are under economic assault from a state sinking ever further into barbarism.

Only those artists who can distinguish between technological religion and political reality can inhabit these two opposed perspectives simultaneously. But living and thinking in a rational space between extremes in a civilization that worships extremity seems inconceivable, so the majority of young artists break to one end or the other on this philosophical spectrum. Houston, like many contemporary art communities, is home to diverse groups of politically engaged artists whose work functions within the language of activism and liberal democratic reform. Activist artists remind us of the ignored people in our cities upon whose theoretical liberation many bad-faith postmodern art strategies are built.

But because these artists too often hold on to the illusion that institutions can act as levees against the emptiness of a state that demands the enslavement of women to their ability to reproduce and the execution of the poor, the brown and the insane, they must accept the institutional charades of artist town halls and mayoral cultural initiatives designed to arrest the righteous anger of disillusioned young artists with enormous university debt, and hurry them into art institutions before they metamorphose into underemployed forty year-old Nietzsche-reading anarchists. The structural lesson of New Orleans showed us that levees always break under the pressure of catastrophe. Plugging holes in the old ones after the water has receded will not hold at bay the storm of historical memory loss and emotional apathy that threatens the decimation of art and literature. If artists cannot distinguish between art objects and simple propaganda, their existence is threatened.

If non-profits and thinly funded museum outreach put restless young debtors to work attending workshops on levee building, then the big, beautiful shark of unfettered market evil swallows up the young nihilists who are too cynical to trust institutions but have nevertheless been programmed to covet the wealth and fame produced by them. After all, if God is dead and we’re all on our way to a watery grave, salvation might just as well be found in the temple of the art fair as a Wendy Davis rally.

Living in a politically corrupt, culturally degraded state in the absence of these two comforting strategies, the artist is left straining under what Nietzsche called “The greatest weight.” Nietzsche asks what a person might feel “…if some day or night a demon were to steal after you into your loneliest loneliness and say to you: This life as you now live it and have lived it, you will have to live once more and innumerable times more; and there will be nothing new in it, but every pain and every joy and every thought and sigh and everything unutterably small or great in your life will have to return to you, all in the same succession and sequence… .”

Nietzsche rejects the illusion of State benevolence and the comfort of market success for the artist or anyone else, and asks if in the absence of metaphysical belief and ceremony, our lives are worth living. Hope for carrying art, in its most meaningful form as symbol and metaphor, into the 21st century lies not in stacking sandbags against the deluge or drinking champagne on the deck of a drowning empire, but in crafting a moral life and an ethical artistic practice for which there are no universal commandments. The epoch of grand artistic narratives is over. Artists as a class no longer enjoy the support of the State, and the romance of the flâneur, the intellectual, and the punk has been sold as lifestyle in spite of the fact that romance is still free.

When the demons do finally come to us in our loneliest loneliness in the early morning, after the gamblers have moved on to better bets and we’ve watched the Ship of State steer the same doomed course while each new captain helplessly stands watch over a locked wheel, whatever remains of us as artists if anything does, will be nothing less than our contribution to the foundation of an inconceivable future: the thing we call Utopia.

Forgive me for sharing (from “Lapis Lazuli” by William Butler Yeats):

“I have heard that hysterical women say
They are sick of the palette and fiddle-bow,
Of poets that are always gay,
For everybody knows or else should know
That if nothing drastic is done
Aeroplane and Zeppelin will come out,
Pitch like King Billy bomb-balls in
Until the town lie beaten flat.

“All perform their tragic play,
There struts Hamlet, there is Lear,
That’s Ophelia, that Cordelia;
Yet they, should the last scene be there,
The great stage curtain about to drop,
If worthy their prominent part in the play,
Do not break up their lines to weep.
They know that Hamlet and Lear are gay;
Gaiety transfiguring all that dread.
All men have aimed at, found and lost;
Black out; Heaven blazing into the head:
Tragedy wrought to its uttermost.
Though Hamlet rambles and Lear rages,
And all the drop scenes drop at once
Upon a hundred thousand stages,
It cannot grow by an inch or an ounce.

“On their own feet they came, or on shipboard,
Camel-back, horse-back, ass-back, mule-back,
Old civilisations put to the sword.
Then they and their wisdom went to rack:
No handiwork of Callimachus
Who handled marble as if it were bronze,
Made draperies that seemed to rise
When sea-wind swept the corner, stands;
His long lamp chimney shaped like the stem
Of a slender palm, stood but a day;
All things fall and are built again
And those that build them again are gay.”

This piece literally conceived my feelings as an artist living in Texas in such an overwhelming way.

Damn, Michael! You post this eight days after I purchase and move into my very first house, which is less than a hundred yards from the Gulf. After many decades in Houston and its occasional magnificent disturbances, I feel quite comfortable here in the (beautifully described) space of “the cognitive dissonance between idealism and nihilism.” I do try hard to craft a moral and ethical life within everyday boredom and mesmerizing weirdness, but please don’t ask me to reread Nietzsche! I’m just slowly and politely grooving towards Utopia.