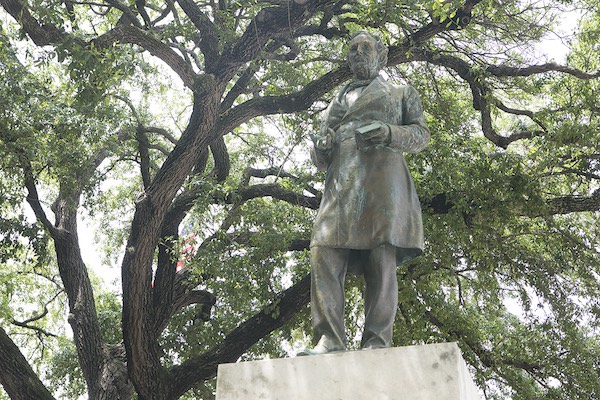 Image via The Austin Chronicle

There has been lots of attention recently on the statue of Jefferson Davis that’s been located on UT Austin’s campus since the 1930s. Along with physical attacks to the statue, the student body has organized a change.org petition to protest the statue’s presence:

“Statues serve to glorify and memorialize the values of what the subject stood for. Given Jefferson Davis’ vehement support for the institution of slavery and white supremacy, we believe this statue is not in line with the university’s core values—learning, discovery, freedom, leadership, individual opportunity, and responsibility.”

In March of this year, the UT student government voted to remove Davis’ statue from the campus. Additionally, UT’s president, Gregory Fenves, announced that the statue will be relocated to the Dolph Briscoe Center for American History.

But as of August 14th, moving the statue has been delayed due to a temporary restraining order requested by The Sons of Confederate Veterans, the same group that lost its case before the Supreme Court last year trying to force Texas to offer a license plate with the Confederate battle flag. The SCV claims that “moving the statues violates the will of George Littlefield, a major donor to UT-Austin who paid for the Confederate statues’ construction.” (Meaning the SCV is cleverly using the same argument that certain members of the art press passionately use to argue against museum deaccessioning…)

While the statue of Davis is being relocated, four other Confederate statues (including those of Robert E. Lee and Texas Revolution hero Albert Sidney Johnston, which we discussed shortly before the graffiti “Black Lives Matter” appeared on the statues earlier this year) will remain in place on the campus. Instead of moving them, “Fenves will consider adding explanatory plaques to place them in historical context.”

Long story short: UT has made a move to move Davis’ statue. Now we must wait for it to play out.

Letter From the News Editor: One Year On