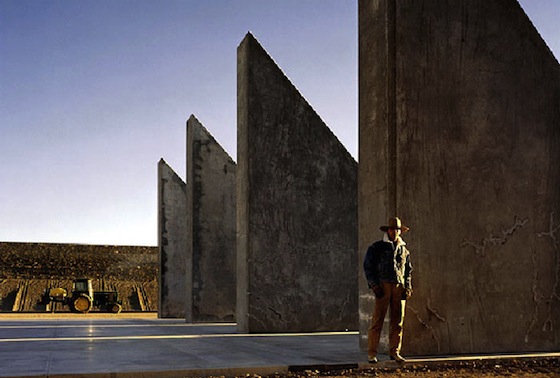 Senator Harry Reid, who last year spearheaded efforts to conserve the region, stated, “This is representative of what desert is all about in Nevada,” as reported by the Las Vegas Review-Journal. “And to make it extra special you have this work of art that he’s been working on for 48 years,” Reid said of Heizer. “You’ve got petroglyphs all over the area. I think it is very important this not be ruined.”

In 2010, Heizer announced he would bulldoze the entire work if the Department of Energy followed through on its plan to construct a rail line for carrying nuclear waste through the area. (It didn’t.) Last year, Senator Reid introduced a bill to protect the area. (It didn’t pass.) This year, the art world joined in and, as Hyperallergic reported in March, the Los Angeles County Museum of Art (LACMA) began promoting a petition on social media. On June 10, the White House released the announcement of the designation of the new national monuments.

One of the other sites that became protected on the same day is Waco’s very own Waco Mammoth site, a significant paleontological area featuring well-preserved remains of 24 Columbian Mammoths.

You May Have Heard This Already: Two Important...

So, feds bumbling around to move radioactive waste where it won’t spill on someone’s house, but don’t have a real plan. Spend years not coming up with one. Nobody likes the idea of a half baked plan. Feds know it’s half baked and cancel. Never let a screw up go to waste —