Last weekend I visited the Philip Worthington installation Shadow Monsters at the Museum of Fine Arts, Houston. I use the museum’s term “installation,” although that’s rather lofty for something that’s really just a well-designed narrative playscape. You stand in front of a lit wall and your projected shadow bristles with animated fins, fangs, teeth and hair. The museum provides props, including a rolling cart of hula hoops. It’s fun. 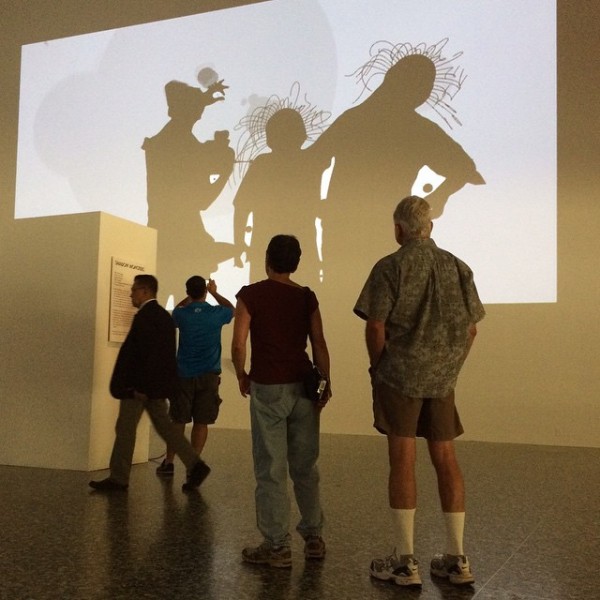 The same unwieldy space in the MFAH’s Mies van der Rohe building was also the site last summer of the memorable Houston Penetrable, designed specially by the late artist Jesús Rafael Soto. That was also fun: as Bill Davenport said in his review for Glasstire, “The kids loved it, I loved it, everybody loves it. It’s effect art, and it sure is effective.” 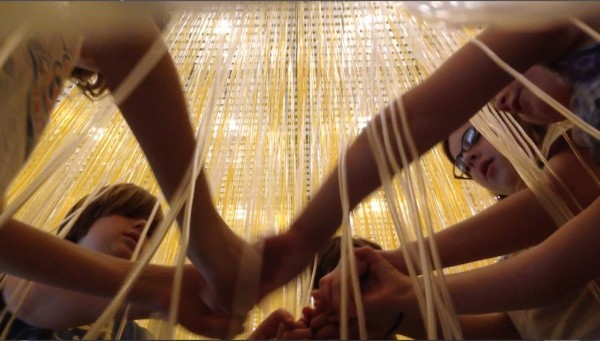 Inside the Soto Penetrable at MFAH, 2014

And that’s what these things are. They’re not art, not really. They’re very smart, very high-concept playgrounds, complete (in Worthington’s incarnation) with comfy bean bags for hanging out and viewing.

The MFAH, of course, is not alone in its embrace of friendly, cool, artist-designed “immersive experiences.” The Nasher Sculpture Center has hosted a number of such “installations,” from Martin Creed’s balloon room, to Katharina Grosse’s painted mounds of dirt, to Ernesto Neto’s crocheted balance beam (with its unthreatening title Cuddle on the Tightrope). The DMA has long hosted its “late night” series where children are invited to visit in their PJs (and have been seen climbing on the art). This week, the LA Times critic Christopher Knight sniffed that the Rain Room installation by Random International “which NY Times dissed as a ‘carnival-worthy gimcrack’ at MOMA” would be coming to the Los Angeles County Museum of Art. 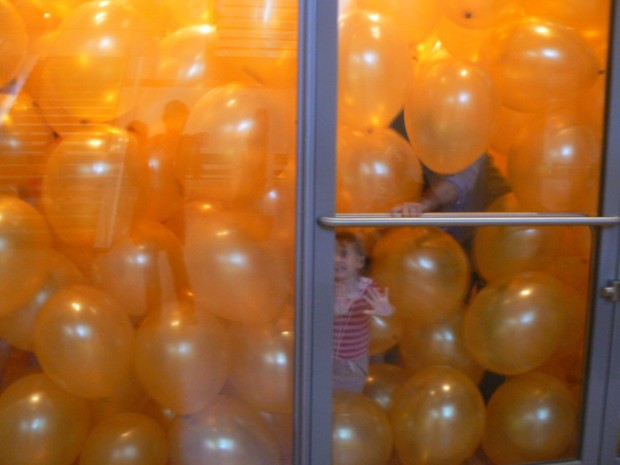 As for me, I’d like to experience Rain Room. Wouldn’t you? You walk through a gallery where it’s raining, and the rain automatically stops wherever you are. Sort of an opposite Charlie Brown experience. Is it art? Mmmaybe. Do we care? Well…

Just as churches have always used shock, awe, and high entertainment value to reel in souls (nowadays the big ones look like rock concerts), museums are ratcheting up their offerings to dazzle the masses and get bums in seats.

It makes sense: if museums are the new churches—sacred spaces of hushed voices, holy objects and an amorphous, ennobling sense of “spirituality”—then they too must work to get crowds in the door. Even the Chinati Foundation recently brought in flamenco dancers, because hey: austerity in the desert will only get you so far. At some point, some manna’s gotta fall. 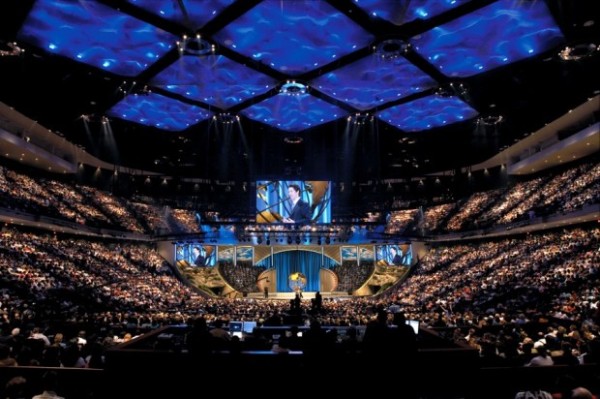 Houston’s Lakewood Church, a.k.a. “The Oasis of Love”

So playscape installations in museums are not really art. Fine. There’s a reasonable argument that anyone who’s overly hung up on such definitions, or who thinks museums shouldn’t try to entice unsuspecting non-art people (“they might stumble into a room with a Franz Klein and just love it!!”) is just uptight, elitist, naïve, and—worst of all—disinterested in the bottom line.

But there’s also a reasonable argument to be made that all this crap fun entertainment in museums cheapens the profoundly important human activity of drawing attention to an idea or philosophy through an intentional object or action (i.e., making art). That if it looks like pandering and smells like pandering, well, maybe it should be wrapped up in the Sunday paper and tossed out. That is, if there were still such a thing as the Sunday paper…

[In the MFAH’s case, some credit/slack has to be given to them for finding enjoyable uses for a virtually unusable space—did Mies actually talk to any artists before he designed that terrible mezzanine, with its band of light reflected from the street? Let’s hope they’re involving artists in the design of the new contemporary building. As an artist friend of mine remarked recently: you wouldn’t design an operating room without getting input from surgeons.] 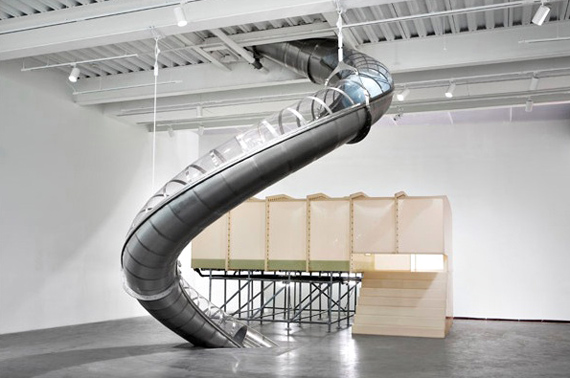 Maybe it’s not these non-art playscapes and pandering to non-art audiences that’s wrong; it’s our definition of what a museum should be (or do) that’s wrong. It’s an idea that has, of course, been discussed extensively elsewhere, in articles, more articles, books, you name it (including here on Glasstire). And frankly, we’ve already come out on the other side: museums have obviously concluded that the art and the playground can and should go together, and we all can just relax, lie back, and enjoy our enrichmutainment. After all, this argument is nothing new: as Raoul Hausmann wrote in the first issue of Der Dada in 1919, “The masses couldn’t care less about art or intellect. Neither could we.”

Art and religion have always been inextricably linked. You could even say that religion is an art form, given the definition above. And just as religion’s job is partly to make us feel bad, it’s job is also ultimately to make us feel good. By installing a few playgrounds, aren’t museums just letting us have a little fun before we suck it up and go look at the serious stuff that’s good for us, that nobody but a handful of uptight, elitist, naïve snobs like anyway?

Or so the argument goes. Me, I just want to go see that rain room. 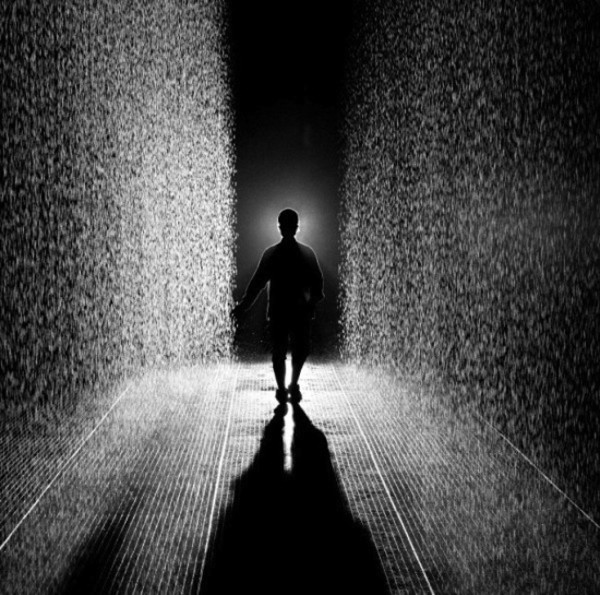 Think I’ll set up an enrichmutainment center at my house.

So What can art not be fun ? I do not tHink that tears and political exclamations nor deep philosophical pondering so is what makes good art. We live in such antiquated ideas of Art in our head. There is good art and bad art? Perhaps this is a better question. How do you know? Probably the same way one knows good wine from bad. Of course for a shortcut there is always Art Rreligion. They’ll tell you! Or will they? Maybe “they” just want your affiliation = money. A tar baby this is. For the moment, let’s have fun!

You started off the article be declaring that several pieces were NOT ART, but never explained why. It would be interesting to hear about your personal definition of what IS ART.

Wow Rainey, the word “enrichmutainment” is new to me – but I’m embracing it. You know, I don’t mind the summer art audience friendly exhibition/installation/thing. One woman’s crap is another woman’s masterpiece. I appreciate your eloquence in highlighting art versus decoration/fun stuff in the revered museum space.

Marshall McCluhan was right, the medium is the message and it’s gotta be as hot as a steaming pile to catch anyone’s attention anymore, and don’t we feel the thrill when it does?

Rain room! Rain room! I want to see it too!
And enjoy my enrichmutainment when I’m in the mood.
Thanks for the thoughts and varied perspectives, Rainey –

To broaden the options of the Visual Diary that we might all draw from to make art we have Universities stepping forward in using words like: Visual Culture, Visual and Media Studies, Historical and Cultural Visualization. And the talk is like that not to have regular folk scream BU::Sh::T but to be open to wonder as media moves all of us along in all of our senses as possibilities of making art.

What is ART? Art is the spirit of the gesture of God. Intangible as that might be.