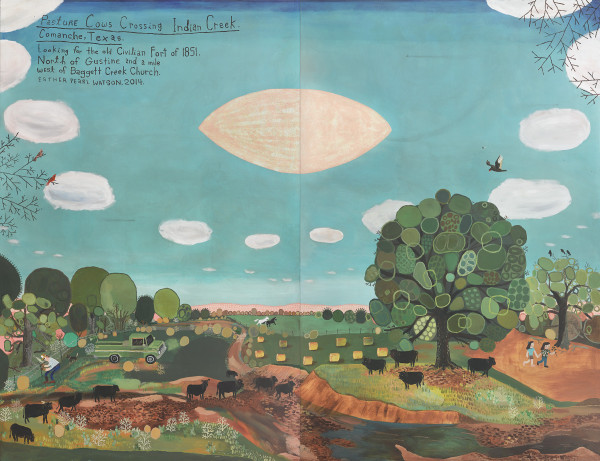 Esther Pearl Watson “Pasture Cows Crossing Indian Creek, Comanche, Texas. Looking for the old Civilian Fort of 1851, North of Gustine and a mile west of Baggett Creek Church,” 2014. Acrylic and glitter on canvas. At the Amon Carter, courtesy of the artist and Webb Gallery.

Esther Pearl Watson grew up in Texas with a father who built scrap-metal spaceships out in the yard. Gene Watson believed he could sell the interstellar transportation gizmos to NASA or Dallas billionaire Ross Perot. He wrote letters to U.S. presidents, seeking funds for the inventions. Wherever the family lived—Sachse, Wylie, Comanche County—this obsession caused problems, especially with landlords, and the Watson clan was often on the move and dealing with more than their fair share of uncertainty. Watson, now 42 and living in California, recently installed her largest-ever painting at the Amon Carter in Fort Worth.

Esther Pearl as a girl was embarrassed by her father’s eccentric hobbyhorse. But when she went off to college in California, two things happened. She learned about the world of outsider artists, and she ventured into the pages of Douglas Curran’s 1985  book, In Advance of the Landing: Folk Concepts of Outer Space. In the latter she read about dynamic, creative individuals like O.T. Nodrog, shown here in Curran’s 1982 photo at the Weslaco Flea Market. While selling wheat berries, honey, and avocado plants at the market, the Santa-whiskered space commander was also predicting that a doomsday cataclysm was a-comin’ to “Time Station Earth” and only those who had undergone his group’s survival training would be rescued on UFO-ish “Time Ark Service Modules,” which had already begun to “functionate interdimensional power exchange.” 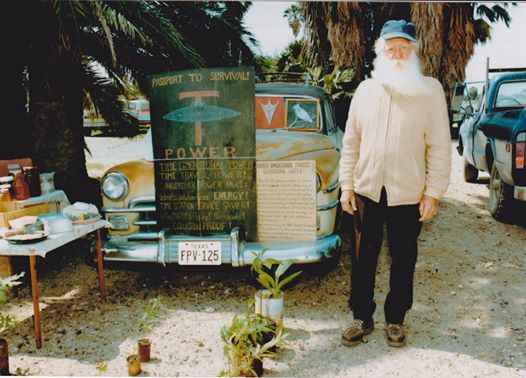 Watson came to see her father as a visionary and an artist. In 2003, she began putting flying saucers in many of her own intentionally primitive “memory paintings.” Because she functionates in an art-world context, some have called her work “insider-outsider” and “faux naïve.” When I first saw her work on the Webb Gallery’s website a few years ago, I sent some links to an artist friend in Los Angeles. His reaction surprised me as he groused that Watson was appropriating a style she shouldn’t because she’d been to art school.

My friend needs to get over it. I’d expected him to find her paintings—as San Francisco artist, journalist, and educator Kristin Farr did—“so genuine in nature and narrative that… it’s impossible not to love them.” Or at least cut Watson some slack and appreciate her “peculiar but sophisticated adoption of an outsider aesthetic,” as D art critic Peter Simek does. 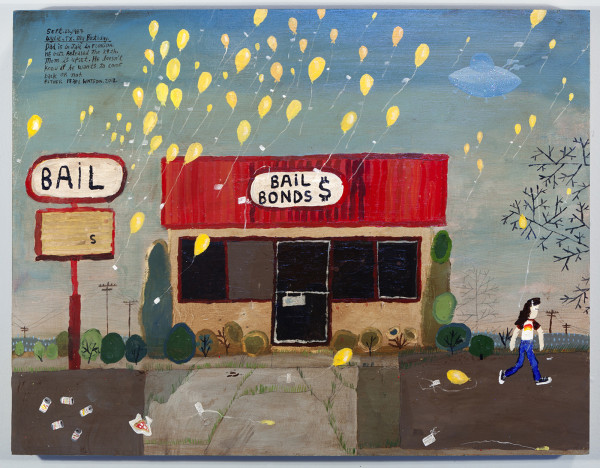 Moreover, her creative DNA was pretty outsidery from the get-go. Surveying her work over the last decade, the snapshot-storyline texts scrawled in the paintings’ corners chronicle an upbringing filled with a heavy duty dose of adolescent anxiety about such basic needs as a roof over the family’s heads. “Moving before the landlord finds us Sachse, Texas” is written on a painting that shows family members hurriedly packing garbage bags of belongings into a car, with the latest homemade spaceship sitting in the yard. A skeleton of a saucer-in-progress, a car engine on a hoist, and a battery on the ground adorn “Sunday March 1989 We got kicked out of church for having head lice” as one sibling examines another’s scalp. And a faintly rendered image of a saucer filled with colored dots hovers over the scene described as “Oct. 17, 1987 Dad’s in jail again with a $3000 fine! I wonder what will happen next Wylie, TX.”  At some point, Mr. Watson quit his job at Texas Instruments to work at Domino’s Pizza in order to have more time to work on his futuristic vehicles. Several paintings show him bringing home “mistake pizzas,” pies that for one reason or another were not sold to customers.

Yet despite the instability caused by her father’s obsession with space travel, most of the narratives in Watson’s paintings are imbued with a sweetness of memory. Even the recollection of her father’s suggestion to fly her to middle school in one of the saucers implies a fond remembrance rather than massive pre-teen embarrassment: “One day in the future Gene Watson told me my friends would want to ride in the saucer. It would have flashing lights and play my favorite music,” is written on a painting depicting two people in a pink saucer that hovers over Wylie Middle School. Another, featuring a guy in a funky spacesuit heading into Richardson Square Mall, explains that “Gene Watson wore clothes from the  future to the Garland High School art show.” 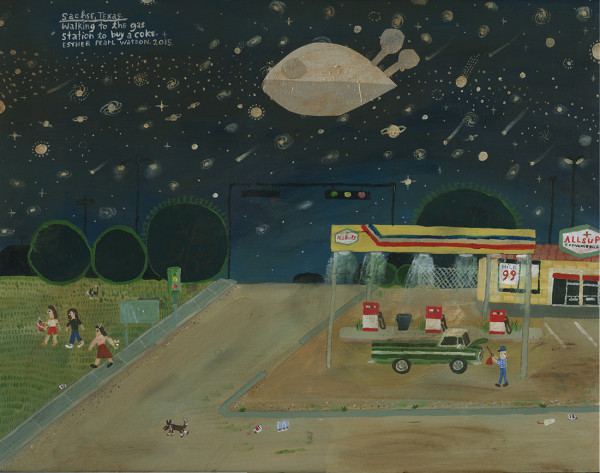 Walking to the Gas Station, 2015. Mixed media on wood panel

The new mural-sized work at Amon Carter definitely engenders comforting associations. Titled “Pasture Cows Crossing Indian Creek, Comanche, Texas, Looking for the old Civilian Fort of 1851, North of Gustine and a mile west of Baggett Creek Church,” the 13′ x 10′ painting depicts a peaceful day in the countryside with a UFO. Watson’s grandfather, who operated a cattle ranch near Comanche, mends a fence as cows with disarmingly expressive eyes mosey across the creek. Horses play in the distance as the girl Esther and a sister or friend go hand-in-hand in search of the old fort. Hay bales dot the field. In the center of the aqua-blue sky a luminescent pink saucer floats above the bucolic scene, creating the mix of pastoral serenity and campy sci-fi, present in many of Watson’s works in rural settings or in small-town neighborhoods depicting sites like Bill’s Dollar Store and Cowboy Dance Hall. I visited the Amon Carter during the June monsoon, but those who’ve seen the painting on a sunny day say they are mesmerized by the way the glitter-sprinkled saucer glows as late afternoon light floods the atrium where it hangs.

A smaller study for the painting is is in Mother Popcorn, the group show of work including Watson (and artists Julie Murphy, Martha Rich, and Nancy Mladenoff) currently on view at Webb Gallery in Waxahachie. The study is a night version, its dark sky vivid with luminous stars. The heavens glow in another night scene, “Walking to the Gas Station,” in which Esther and two other girls head home from the Allsup convenience store with soda waters as a gray saucer with bulbous extensions hangs in the atmosphere. In “Lady Saucer Sightings,” a work in pencil on brown bag paper, a tin-foil UFO soars past a sculpture of a Glen Rose dinosaur.

Narrative drama continues in the Webb exhibition with works like “Safeway,” which shows Mrs. Watson and the kids leaving the grocery store as a riveted silver airship bobs in the sky. “Garland, Texas, 1986,” the inscription reads, “At the cash register. We realized we had no cash. Mom spoke in tongues & that was that.”

A pencil drawing with a silver saucer continues the saga, “We moved to Garland, TX, 1985, in a van Gene Watson bought for $400. It only had a driver’s seat, everyone else had to sit on a shag carpet in the back.” A painting of a bail bonds business dated “9-23-87, Wylie, TX” evokes family crisis: “Dad is in jail in Florida. He gets released the 29th. Mom is upset. He doesn’t know if he wants to come back or not.” 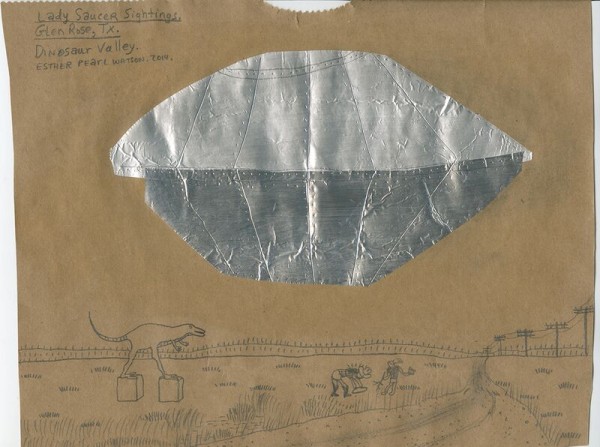 Five years later, in 1992, Gene Watson moved back to his native Italy (not Italy, Texas). His blog describes him as “a retired Italian American who invents things mostly out of junk and has unconventional propulsion ideas. He likes flying saucers, electric motorcycles, electricity, welding, circuits, vintage computers, rockets, nuclear fusion, physics II, drones, space, philosophy, and theology. An all around mad scientist.” Short videos on the blog page show his levitation of a saucer and other experiments, and there is a drawing of a “Dielectric UFO Power Generator (Redrawn For Clarity).”

The page includes a link to information about the book Gene Watson Flying Saucers and Generalized Propulsion by Esther’s brother Stephen Watson:

Gene Watson claims his concepts may be responsible for some of today’s UFO sightings as America secretly perfected his designs that have never been revealed before… Learn about AC ionic thrust (with lab photo examples), cascade burning rockets, cyclotronic rockets, hypersonic jets, gear reduction flying saucers, plasma, nuclear fusion, and much much more! There’s even a human flapping wing design that Gene Watson claims will work!… . Gene Watson is a modern day Leonardo da Vinci who was way ahead of his time encompassing the spirit of the Wright brothers in trying to build a real working flying saucer. He even attracted the attention of Ross Perot during the 1980s and DARPA before he had to flee the country and permanently move back to his native land Italy.

Visiting her father in Italy, Watson gave him one of her paintings, which he proudly hung next to his Donald Duck poster. And one of her earlier works, of a scene from two years before she was born, does seem to acknowledge that Pops was onto something. “Gene Watson built a saucer that flew a few meters off the ground 1971,” is written on a painting that shows a saucer achieving lift-off. “I love my childhood story,” Esther Pearl told blogger Meighan O’Toole in 2009. “Life is funny, difficult, sad, ridiculous….so many opposite things at once. My dad is a huge inspiration.”

What a fascinating Dad. Life with him definitely inspired some delightful work. I hope a show in Houston is in the works.